Chipotle is a fast food haven for vegan diners, the reason being, they allow their customers to choose every item in their meal and see it being made right in front of their faces. This saves vegans and people of other allergy/dietary restrictions the worry of being served something that doesn’t meet their needs. Chipotle has taken this transparency a step forward and has recently launched a new tool designed specifically to help diners find exactly what they’re looking for.

Called ‘Eat To Your Own Beat,’ the newest addition to Chipotle’s website highlights a variety of different lifestyle and dietary choices including vegan, vegetarian, and dairy-free. When a user clicks on any of these tabs, like vegan, for example, a drop-down menu appears listing all of the ‘Go For It’ foods and ‘No Go’ foods — meaning foods that work for veganism and foods that do not, respectively. 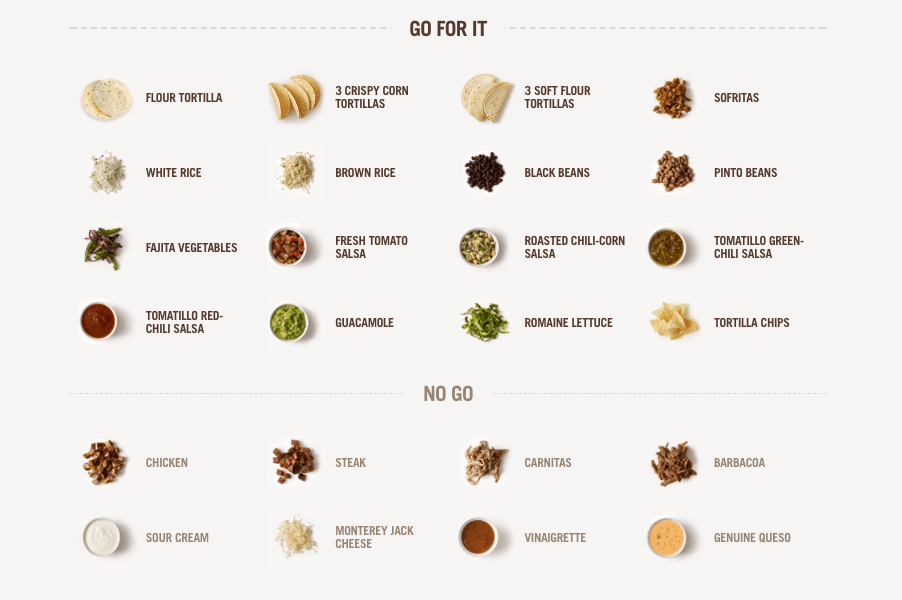 They write on their website, ‘for the vegans in the bunch, avoiding animal products at Chipotle is easier than you may think. Even without the meats, dairy products, and vinaigrette (which is made with honey), there are still plenty of tasty vegan-friendly options, including our popular Sofritas [a plant based meat].’

Whether you get a burrito or a bowl, eating vegan at Chipotle is, indeed, easier than ever. Chipotle’s accessibility to vegans is part of an increasing shift to veganism in today’s food culture, Taco Bell also released a similar vegan guide last year. With hope, this year may see even more fast food chains making an effort to release plant based meats and other vegan products.