As a follow-up, Teigen also posted on Twitter, saying, “I just had such an incredible feast at ABC V in NYC. Truly. All vegetarian, every single dish so flavorful and unique and absolutely bonkers delicious. You guys have killed it and deserve all the praise in the world!!!”(The majority of the menu is vegan). 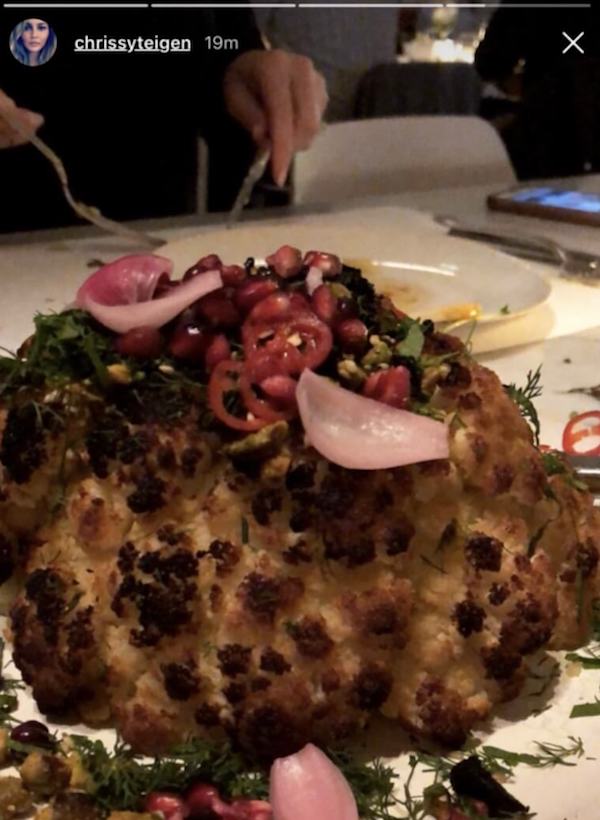 AbcV is part of the Jean-Georges restaurant group, an international culinary company with numerous restaurants (many of them fine dining) across the US and UK. This plant-based venue opened in New York in February 2017, serving exclusively vegetarian and vegan options in a chic minimalist setting. The extensive menu serves breakfast, brunch, lunch, dinner, and of course, dessert, along with cocktails and wine. The concept focuses on vegetables as the star of every plate, elevating them in dishes such as Provencal white asparagus with vanilla bean, basil, lemon, and raw heart of palm. Teigen appeared to enjoy her wood-grilled baby artichokes, California citrus, Sicilian olive oil, and basil, as well as the iconic whole roasted cauliflower with turmeric-tahini and pistachios. Other options include a medley of Light and Fresh vegetable small plates, Noodles & Rice, Warm & Hot dishes, Legumes, and Dosa.

Although not vegan, Teigen is a self-proclaimed foodie. She may have graced the covers of countless magazines such as Sports Illustrated and Cosmopolitan, but she also enjoys a good meal. She has starred in two Cooking Channel shows and released a cookbook in 2016. Her book, “Cravings: Recipes for All the Food You Want to Eat,” is far from plant-based, but her recent experience at abcV may have inspired her to create a vegan version in the future.

The vegan lifestyle has become popular among the A-list celebrity crowd. Those who are not vegan have dropped hints on social media, alluding to their interest in giving the diet a go. For example, Mark Wahlberg was spotted feasting at Planta in Miami, Jennifer Garner raved over Jessica Chastain’s vegan pancake post on Instagram, and Gordan Ramsay recently tweeted that he’s “Going to give this vegan thing a try.” With so many celebrities already committed to the vegan lifestyle, these veg-curious A-listers will be in good company.