The UK’s Co-op supermarket chain is launching a range of vegan ready meals according to an image shared by the Vegan Food UK Instagram page.

The image, which appears to be a store circular, shows several items including a BBQ jackfruit sandwich, BBQ pulled jackfruit, Thai style broccoli with rice, a green curry stir fry, and mushroom stroganoff. 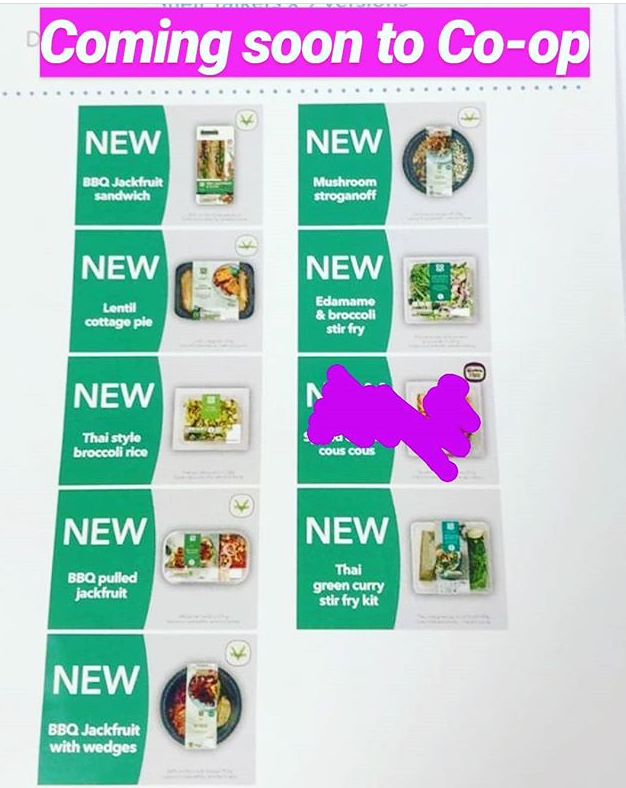 Leading UK supermarket chain Tesco has seen tremendous success with its own-brand Wicked Kitchen ready-meal range. The offerings are vegetable-forward and focus heavily on mushrooms in a variety of vegan wraps and sandwiches, pizzas, curries, pasta dishes, and desserts. Developed by the chain’s director of plant-based innovation, Wicked Healthy chef Derek Sarno, the Wicked Kitchen range was so popular it exceeded the supermarket’s sales predictions by more than double in its first five months on shelves.

Demand for vegan meals in mainstream markets continues to increase. Markets including Sainsbury’s, Waitrose, Aldi, Asda, and Morrisons have all been steadily adding to their growing vegan sets as consumers seek to diversify their protein and dairy options.

Vegan meat producers and “butchers” are also on the rise; the Holland-based Vegetarian Butcher was recently acquired by international food company Unilever, expanding its distribution potential to more than 170 countries. Nestlé recently announced plans to target two of the fastest growing market segments for plant-based foods: protein and dairy. The world’s largest food brand is launching a vegan mushroom burger called the Incredible Burger aimed at nabbing some of the market being dominated by U.S. brands Beyond Meat and Impossible Foods. Nestlé also announced it will be launching purple walnut milk, as consumers continue to embrace the dairy-free milk category.

It’s not just vegan meat and dairy-free milk that are seeing increased consumer demand, though. High street retailer Harrods recently opened its own “vegetable butcher” to meet the growing demand for fresh fruits and vegetables as consumers seek out healthier and more creative ways to get dinner on the table.