The Co-op has launched a brand new vegan range.

Called GRO, the new range has launched in around 2,000 stores. It is also available in 4,000 independent retailers through its wholesale operation NISA.

According to the chain, the new range fits with changing consumer habits. “We stay close to our customers changing requirements,” said CEO of Co-op Food Jo Whitfield in a statement. “We have to provide fantastic products and services with strong ethics and a purposeful focus on convenience.”

The launch brings The Co-op’s vegan range to more than 1,000 products; this includes its range of vegan wine.

“Our new vegan range taps into the latest consumer trends,” added Whitfield. “And our online services meet the growing appetite for fast home deliveries.” The supermarket chain is rolling out same-day delivery services across the UK throughout 2020.

By catering to rising demand for vegan food, The Co-op joins a number of UK supermarkets that have launched new meat-free and plant-based ranges.

Waitrose recently announced it would be doubling its vegan range for 2020. It is launching more than 30 new products, including Fishless Goujons and a Meatless Feast pizza.

“Cutting down on meat, increasing your vegetable intake, or going vegan has never been easier,” said vegan food developer for Waitrose Simona Cohen-Vida-Welsh in a statement.
“Last year, we saw veganism and plant-based diets making their way further into the mainstream. We see no signs of this slowing down.”

Marks & Spencer has also expanded its vegan Plant Kitchen range with a number of new products, including a plant-based chicken kiev and tofu fish and chips.

April Preston — director of product development for the chain — said in a statement, “veganism is a trend that we are absolutely loving at M&S … we are having fun creating new products to fit within this.” 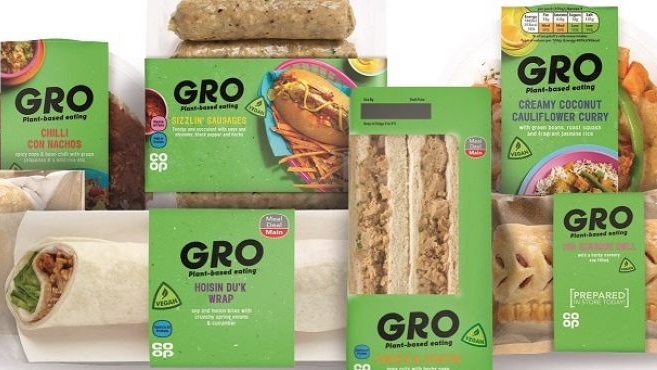