Australian supermarket Coles — which has more than 800 locations across the country — added a new range of vegan meat to its shelves.

Eaty by Soulfresh offers two ranges, ready-to-eat and BBQ Classics, both of which are now available from all Coles locations. The supermarket chain picked up the brand after it sold out completely at independent retailers in June.

Soulfresh CEO Didi Lo believes that consumers enjoy Eaty’s products — which include vegan Italian Beef Meatballs, Pork Snags, and Thai Green Chicken Curry — because they have a texture that’s very similar to animal-based meat. In fact, he believes they are even meatier than the popular “bleeding” Beyond Burger by U.S. brand Beyond Meat.

Beyond Meat is available around the world in supermarkets and fast-food chains. It recently held one of the most successful first-day IPOs of 2019, and it has been widely praised for the likeness of its products to the real deal. But Lo maintains that Soulfresh’s vegan meats are even better. 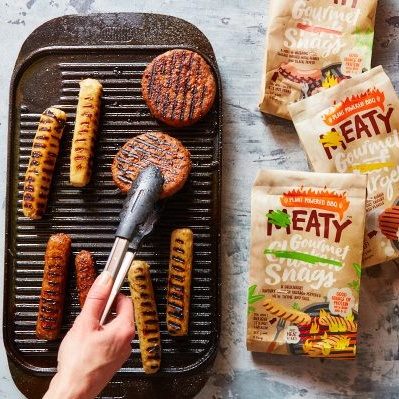 CEO Didi Lo says Eaty is meatier than Beyond Meat.

“The biggest barrier for consumers to eating these type of products has always been texture,” he told Business Insider Australia. “Soulfresh has been developing the plant-based meats for the last three years to overcome this.”

He continues, “Eaty is what we consider to be fifth generation in meat analogues, taking traditionally short fibre vegetables and creating a great textured replacement for meat, with the same protein levels as its meat counterparts.”

“This differs to the fourth generation of raw ‘bleeding’ meats which are currently available on the market,” he adds. “[They] require cooking and do not provide the same convenience.”

Eaty isn’t just up against Beyond Meat, the plant-based food market in Australia is growing. Earlier this year, Sunfed Meats launched its realistic vegan chicken at Coles, and The Alternative Meat Co. launched its range of vegan mince, sausages, and burgers in the popular supermarket.

“The interest in plant-based meats in Australia is huge,” said Lo. “With more than 10 million Australians opting to go meat-free at least one day a week, it is not surprising that major supermarkets are offering more choice to consumers in this space.”