The money comes by way of the Peter Thiel Fellowship, a two-year grant program created to support young people who have dropped out of college in order to pursue new concepts. Le dropped out of college last year to focus on Terramino Foods. Along with her co-founder, she recently completed a four-month program at the world’s leading biotech accelerator, Indie Bio and received $250,000 in seed funding as well as access to resources to develop products.

Additionally, the company reported earlier this month that it had secured $4.25 million in a round of seed funding. In recent years, many vegan startups have attracted the attention of venture capital firms, incubators, and accelerators due to the growing consumer demand for plant-based food. With the combined funding, Le hopes to double the size of Terramino Foods, which currently has four employees. “Just having that support really helps — being a founder is a lonely job sometimes. It’s cool to be in a community that values hard work and innovation and bucks the trend of getting a standard nine-to-five job,” Le said. 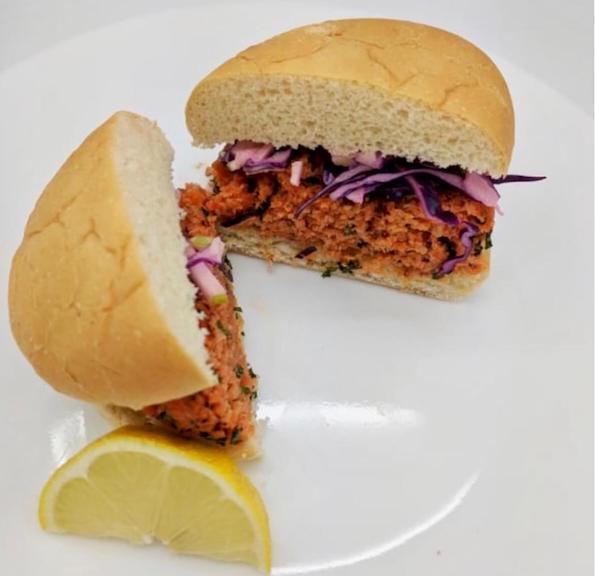 Terramino Foods flagship product is a vegan salmon burger made from koji, a fermented, mushroom-like ingredient found in miso soup and soy sauce that is said to give the burgers a realistic, fishy flavor without using any animal ingredients. Le developed the first concept for the vegan salmon burger while she was still a student at UC Berkeley. Choosing koji eliminated the need for Terramino Foods to develop its own ingredient to impart realistic, fishy flavor in its vegan seafood. According to Le, the startup’s fishless salmon burgers are indistinguishable from the real thing.

Like many other vegan startups, Terramino Foods envisions a future with a sustainable, plant-based food system. In addition to making vegan seafood, the company eventually hopes to develop protein-rich plant-based meat made from kojj.

Though Terramino Foods has not issued a statement on the launch of its vegan salmon burgers, the company plans to offer exclusive tasting events as it works to perfect the recipe. Those interested in signing up can do so online.