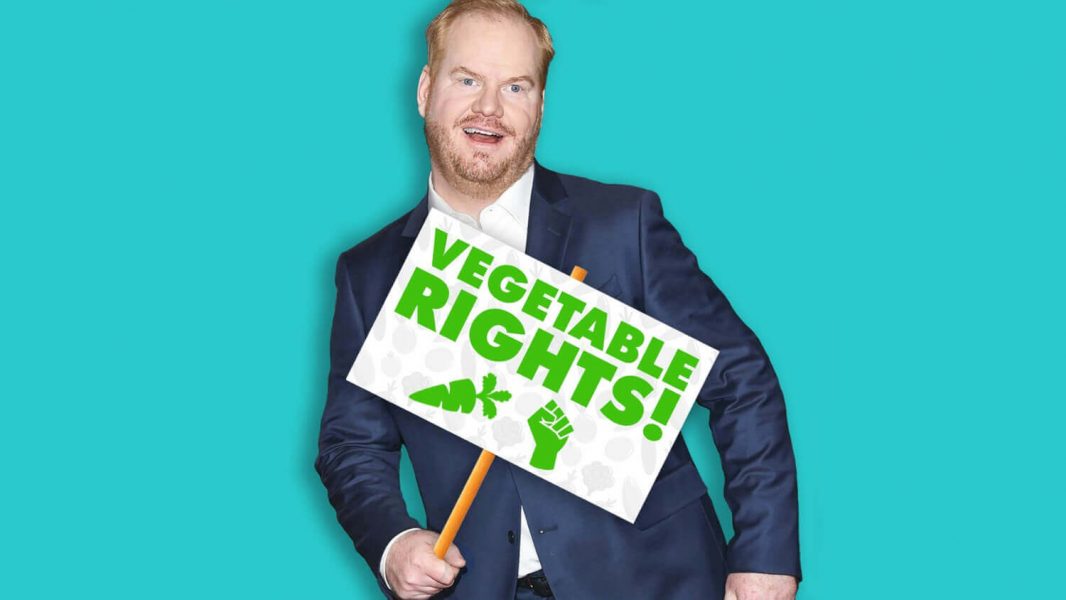 Stand-up comedian and television actor, writer, and producer Jim Gaffigan might be including more plant-based foods in his diet very soon.

Gaffigan, who also serves as a commentator on the show “CBS News Sunday Morning,” took to the network’s website to share a recent personal medical story that ended in an appendectomy. “I’m with my large screaming family in Alaska pretending to enjoy being outside, when I began to feel a persistent pain in my gut,” he wrote. Gaffigan was eventually taken to a hospital in Alaska, where doctors recommended the immediate removal of his appendix. “…I guess my three-cheeseburger-a-day habit had finally caught up with me.”

“As I steeled myself for a lifetime of quinoa, kale and other disgusting green vegetables, my new surgeon walked in,” Gaffigan continued. “My eyes immediately went to his name tag. Dr. Muffeletta. Was I now being visited by the Ghost of Unhealthy Sandwiches Past? Was my recovery nurse to be the Ghost of Vegan Future?”

People talk about kale like it’s a band. Have you seen that new album by Kale? They’re known for their terrible taste.

While the comfort food-loving comedian, who is known for poking a bit of fun at vegans and vegetarians, connected his love of cheeseburgers and other animal product-laden foods, there is no medical evidence that suggests that a diet heavy in meat and dairy is linked to an increased risk of appendicitis. When Gaffigan asked if the medical emergency was related to his preference for processed meats like pastrami and bacon, the surgeon explained that science isn’t certain of what causes an appendix to stop working, nor does it entirely understand its purpose.

A vegan lifestyle may not have helped save the “Food: A Love Story” author’s appendix. However, a growing number of studies show that a diet rich in whole, plant-based foods like fruit, vegetables, grains, beans, and legumes is one of the healthiest ways to live.

According to Dr. Neal Barnard, founder of the medical nonprofit Physicians Committee for Responsible Medicine (PCRM), a healthy plant-based diet may even aid in speeding up recovery. Speaking to CNN in January 2017, Barnard explained how vegan food can help reduce inflammation, which has been linked to animal products and can potentially slow down recovery time.“The closer you get to no animal products at all, the better off you’ll be,” he said.