Updated June, 2019 | Food giant Tesco may have 100 candles on its birthday cake, but the chain has remained ahead of the game with market trends. The UK’s biggest supermarket has cornered the UK market in vegan products, offering everything from sandwiches to vegan-friendly haggis.

The rise of meat reducers, flexitarians, and plant-based eaters has seen the vegan food market skyrocket and Tesco has been firmly strapped into the cockpit. Not only has the company developed and launched two plant-based ranges, but it has also been quick to stock popular branded products such as Beyond Meat, Violife, and plant-based Goodfellas’ pizzas.

The winner of PETA’s 2017 Most Vegan Friendly Supermarket Award has come a long way since its founding in 1919.

Its founder, Jack Cohen was born to Polish immigrant parents in East London’s notorious Whitechapel. At the tender age of 21, Cohen launched a group of market stalls which went on to become the Tesco we all know today. Now serving seven countries across Europe and Asia, Tesco is a British institution to be proud of, like Britpop, William Shakespeare, and thickly cut chips.

‘Every Little Helps’ the Environment

The retailer’s mantra “Every Little Helps” applies not only to its competitive pricing but also to its policies on food sustainability, climate action, and zero hunger.

As part of its UN Sustainable Development Goals model, Tesco has highlighted 17 key areas to focus upon as a company. All the highlighted areas are geared towards limiting Tesco’s environmental impact and being a force for change. One way to reduce environmental impact and carbon emissions is to reduce the production and consumption of animal products. With this in mind, Tesco has championed vegan food in recent years.

Tesco is so dedicated to meeting the demands of the modern market, it has even appointed a Director of Plant-Based Innovation in the form of vegan chef, Derek Sarno.

Assisted by his brother Chad, Sarno launched the private label Wicked Kitchen range to coincide with Veganuary 2018. While you won’t find the word vegan on any of the range’s items, the varied line is completely plant-based and is also — as the brothers say on the Wicked Healthy website — “80 percent healthy and 20 percent wicked.” 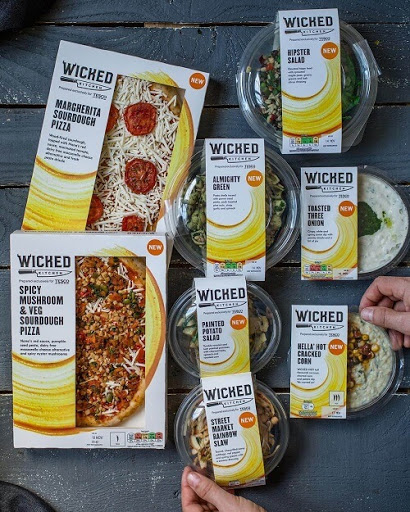 As of December 2018, it also offers a sandwich platter which can be delivered straight to your office kitchen as part of Tesco’s new Wicked Kitchen catering service. The Wicked Kitchen range sold a whopping 4 million meals in just 33 weeks following its launch at 600 Tesco stores in January 2018.

Derek told LIVEKINDLY in an email interview that compassionate eating is at the core of its business model, “the main practice behind everything we do is compassion combined with being connected and aware of what we’re eating,” he said.

According to figures recently released by supermarket competitor Sainsbury’s, 91 percent of the UK now follows a flexitarian diet.

Another increasingly popular trend is that of the meat-reducer, which according to a survey by More Than Carrots, describes 28 percent of the British population. Many meat-reducers cite minimizing their carbon footprint and reducing deforestation as their main motivation for cutting down animal products, while flexitarians may also be driven by health or animal welfare concerns.

Tesco has recognized that vegan products effectively meet a whole range of different dietary requirements in one fell swoop. As such, it has been a trailblazer for making vegan-friendly foods everyday and accessible. Whether you’re a veritable vegan, full-on flexitarian or just someone who likes to try new foodstuffs, here is a rundown of Tesco’s most popular vegan offerings. 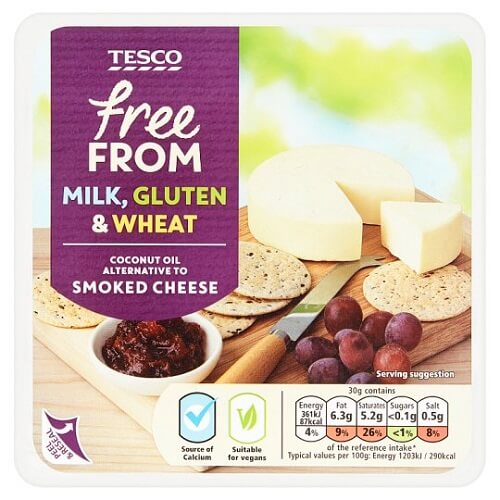 As well as stocking popular brands such as Violife, Tesco launched its own line of dairy-free cheeses in early 2017 as part of its “Free From” range.

Made from the superfood staple, coconut oil, the vegan cheese line proved so successful that Tesco extended the range to an impressive 11 products later that year. To avoid any quibbling over its products being called cheese, Tesco describes each product as a “coconut alternative to..” before naming the particular type of cheese. The range includes products from day to day classics to more artisanal curd 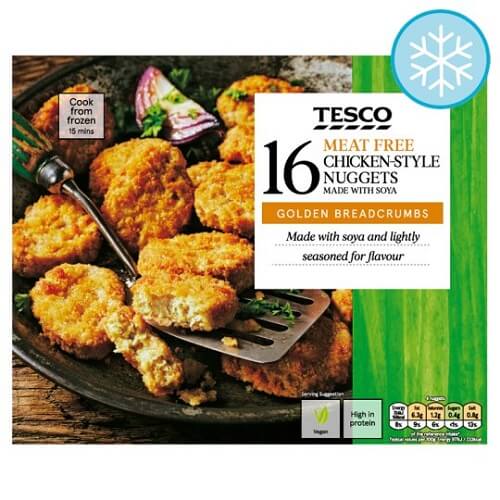 While Tesco’s more obviously plant-based products, such as its peanut and avocado burger are enjoyed by many customers, there remains a demand for vegan meat. New innovations in plant-based protein are fuelling the market and Tesco is, of course, a part of the vegan meat menagerie with own-brand products and established brands like Quorn and Linda McCartney. The global chain’s vegan meat options include: 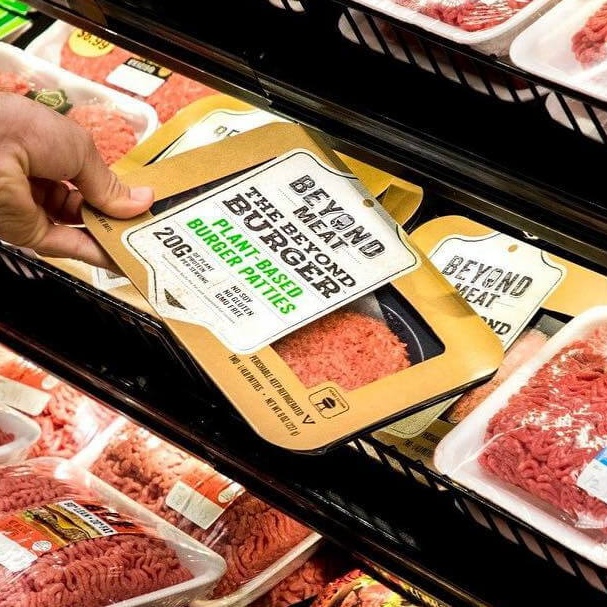 Tesco is the only UK supermarket to stock the Beyond Burger

Tesco is currently the only UK supermarket that stocks the Beyond Burger from award-winning California company Beyond Meat.

The “bleeding” burger crafted from pea protein isolate and beetroot extract has changed the face of vegan meat, making it everyday and affordable. This is demonstrated by the fact that, according to Beyond Meat’s founder, Ethan Brown, 93 percent of the people buying the Beyond burger are meat eaters.

For Brits who can’t be bothered to trek to Honest Burger or All Bar One for a taste of the Beyond Burger, the quarter pounder patties can be found in Tesco’s meat aisle and retail at £5.50 for two. 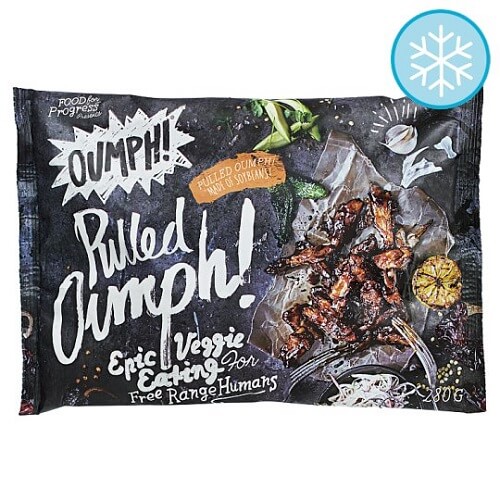 Another addition to Tesco’s plethora of plant-based products is Swedish brand, Oumph!

The soy-based items were introduced to 400 branches of the UK’s largest supermarket chain in March 2018 and were selected by Sarno. The brand has proved so popular, it was extended to Irish Tesco stores in January 2019.

Tesco currently stocks the following products from Oumph! Which can all be found in the freezer section. 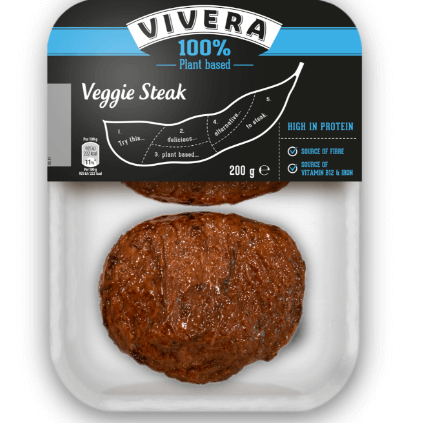 Vivera has a number of products in Tesco supermarkets

Tesco first started stocking vegan products from the Dutch company in May 2018 and managed to sell 40,000 of the brand’s plant-based steaks in the first week. Most of Vivera’s organic products are soy based so are very protein rich and like Tesco’s other vegan meat products, are stocked alongside the meat products. The Vivera Range Includes: 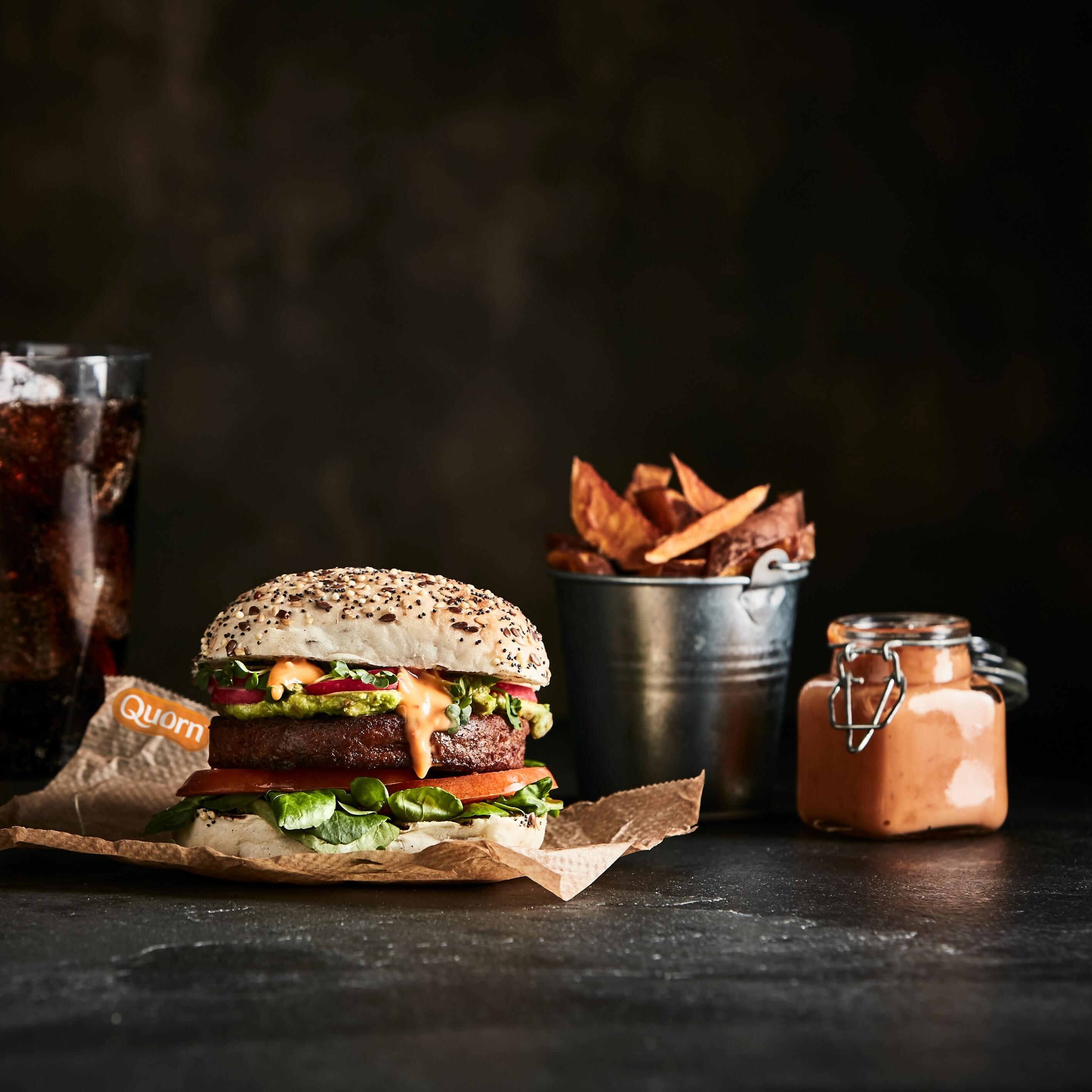 One of the oldest vegan meat product brands in the UK, Quorn has begun altering its recipes to make them vegan-friendly. It has also brought out a range of vegan products, spear-headed by its answer the Beyond Meat burger, the Ultimate Burger. Quorn’s most recent vegan product release also included the below:

Tesco has made being vegan on-the-go a great deal easier with its extensive range of grabbable plant-based products. As well as its signature falafel wrap which is also included in the daily £3 meal deal, the company also sells a number of quick plant-based lunch options.

The latest addition to the range is the Wicked Caeser Wrap, which consists of pea protein tenders, V-Caeser dressing, chickpea croutons, and fresh salad greens. It’s the first pea protein item in the Wicked Kitchen range, designed to rival one of the UK’s most popular sandwiches, a chicken caesar wrap.

The Wicked Kitchen range heads up the lunchtime menu and includes:

Tesco now also offer a Wicked Kitchen Easy Entertaining Platter. The brand’s website does advise they need two working days’ notice to be able to deliver the platter, which is made up of the Smashin’ Pumpkin Falafel Sandwiches, Turmeric, Cauliflower & Coconut Bites Wraps and Spicy Mexican Style Wraps. 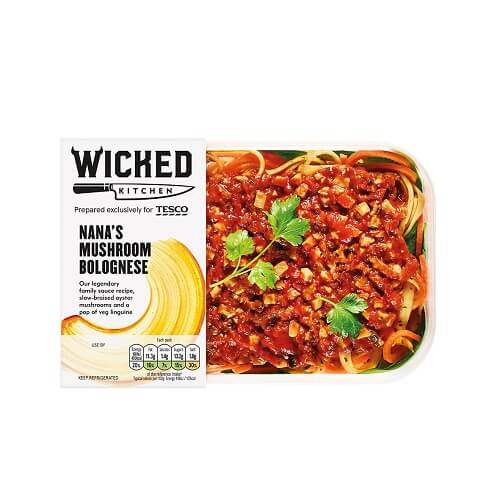 As part of its ongoing campaign to make vegan food more accessible, Tesco has developed a varied range of plant-based ready meals. The chain offers its own brand vegetable biryani, chickpea bulgur wheat, and vegan pizza as easy dinner options.

It also offers 11 Wicked Kitchen ready meals. These are: 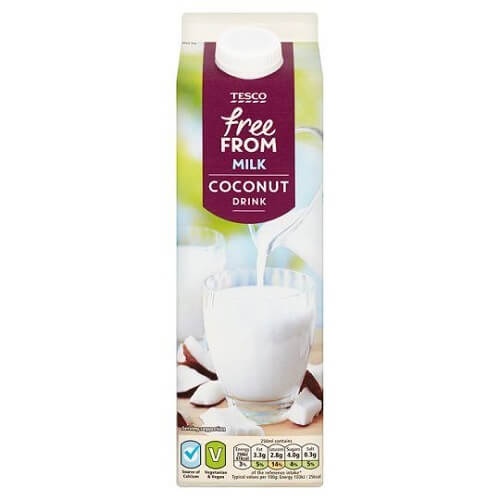 Alongside its rather impressive line of vegan cheeses, Tesco’s Free From range also includes numerous other vegan dairy products. The supermarket has its own line of plant milk, which costs 95 pence for a liter of soy, coconut or almond milk. It also carries dairy-free brands such as Oatly, Alpro, and Koko.

It also sells its own soy-based vegan yogurts, which come in plain, blueberry, mango or raspberry and passion fruit, as well as Coconut Collaborative and Alpro yogurt. Not forgetting children who are swaying off cow’s milk, Tesco also sells soy fromage frais in either apricot and banana or strawberry and raspberry flavor. These cute little pots look and taste rather like the lunchbox favorite, Petits Filous. 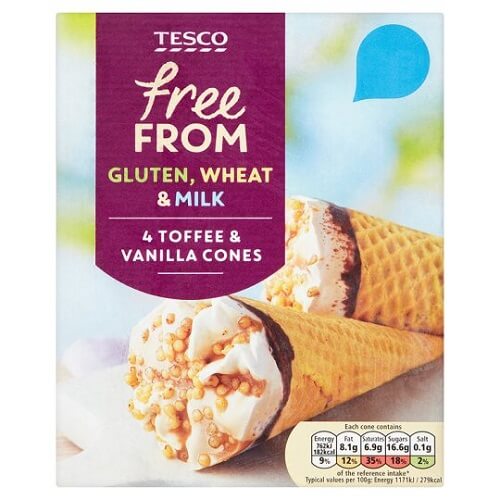 Whether you’re vegan, lactose intolerant or just fancy some plant-based indulgence, Tesco’s Free From chocolate range has a few products to satisfy your sweet tooth. 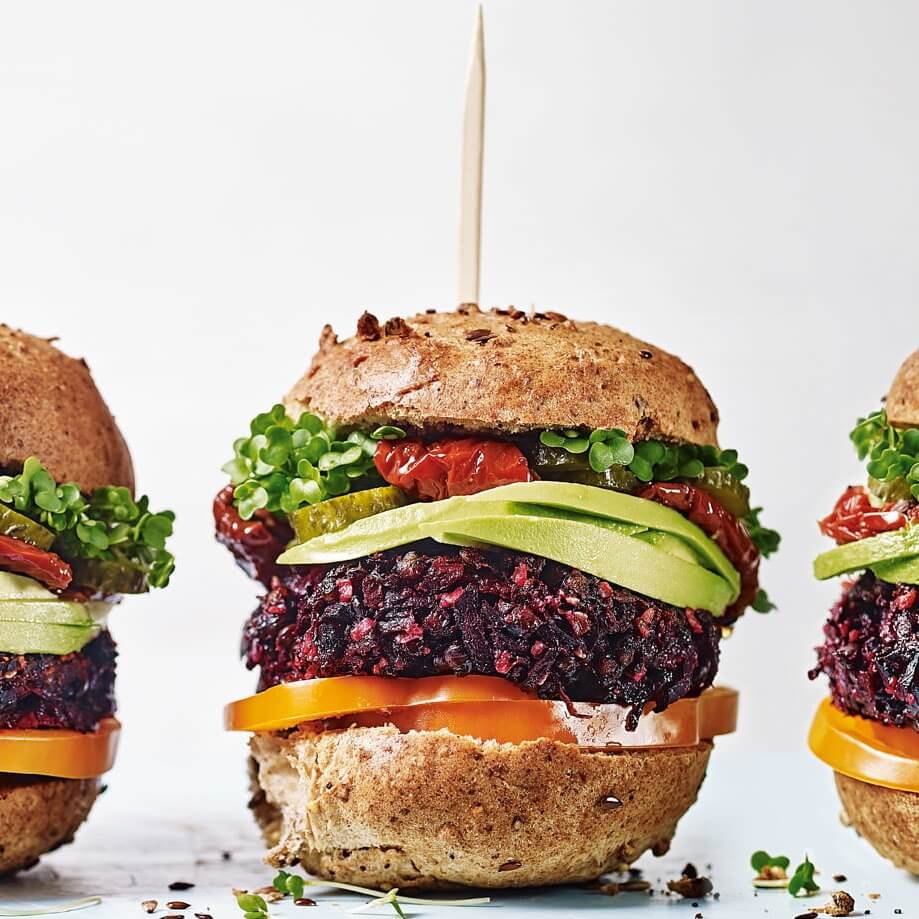 Tesco is now selling beetroot burgers as part of its ready-to-cook BBQ range, just in time for summer | Image/Tesco

Just in time for summer, Tesco has released a whole host of BBQ friendly products, many of which are also vegan-friendly. Gone are the days when vegans have to rely on a selection of side dishes and salads to join the barbeque fun. As well as offering customers the Beyond Burger, which arrived in time for BBQ season, the Tesco BBQ Range vegan options include:

With none of the new BBQ options costing more than £2.00, no one can complain about the expense of catering to vegans this summer! 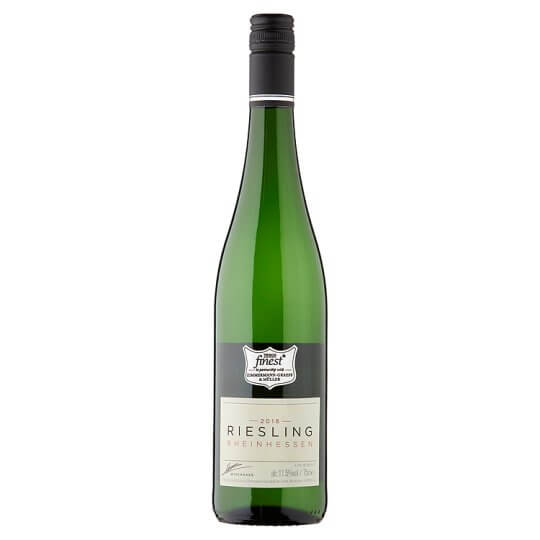 Tesco stocks an extensive selection of wines from many different brands across the world. Its own brand selection does include many vegan options, however, not all of them are clearly labeled, so it’s always worth checking carefully! Thankfully the supermarket announced it would be adding four vegan-friendly wines that are perfect for summer drinking.

The four new options include:

Bring on summer so we can enjoy these, along with all the vegan BBQ options!