If there’s a sign of how mainstream plant-based food has become, it might just be that you can now buy two-pound boxes of vegan chicken fingers at Costco.

ConAgra-owned Gardein is one of North America’s most popular vegan meat brands. Sales have quadrupled over the past four years, with sales totaling $170 million annually. It is the second-largest meat-free brand in the space behind MorningStar Farms. According to CEO Sean Connolly, additional production capacity will be added to its two existing facilities this fall in order to grow the brand. 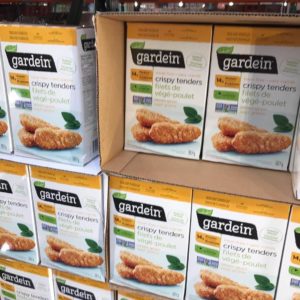 The food court is also becoming more vegan-friendly. Last July, U.S. stores removed Polish hot dogs from the menu. The move was a bid to make room for plant-based options like vegan açai bowls and salads.

The influx of vegan products as Costco is a representation of how eating habits have evolved in recent years. More consumers than ever are going “flexitarian” and making the conscious choice to eat fewer animal products, primarily for health-related reasons.