You can now get vegan eggs at Costco.

The warehouse store now carries two-packs of JUST’s liquid vegan eggs for $9.99 a piece — which is around the price of a single bottle at other grocery stores. According to Instagrammer @costco_doesitagain, the plant-based egg was spotted in a store on the west coast.

What Is the JUST Egg?

Made from mung bean protein, the JUST Egg is a versatile vegan egg that can be used to make vegan versions of classic egg dishes like scrambles, omelets, and quiches. It can also be used for French toast, waffles, shakshuka, and pad Thai.

According to JUST, its vegan egg contains no cholesterol compared to the 373mg found in conventional chicken eggs. It uses less land and water than eggs and is also kinder to animals.

Ninety percent of egg-laying hens are kept in cramped battery cages, depriving them of social interaction, exercise, and autonomy. They are typically considered “spent” after just a couple of years and sent to slaughter. When taken care of, chickens can live up to ten years.

The JUST Egg is currently the top-selling liquid egg in the natural category, per retail point-of-sale data through the end of May, generating 40 percent of all sales in the category. 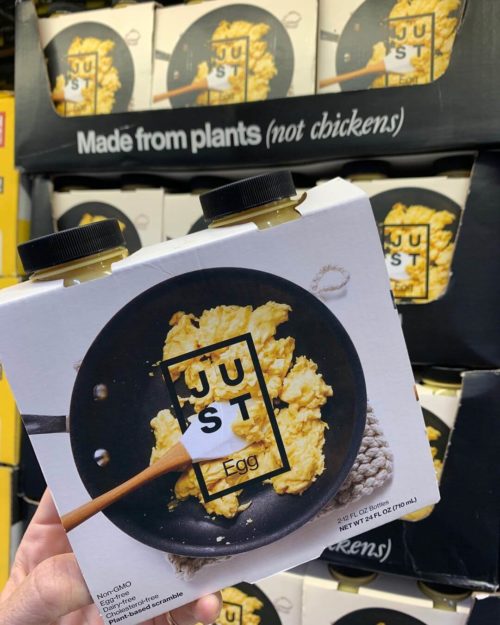 The JUST Egg is now available in Costco | image: costco_doesitagain/Instagram

The JUST Egg isn’t the only new vegan option at Costco. Shoppers have recently found eight-packs of Beyond Meat’s realistic Beyond Burger. It also carries Don Lee Farms’ Organic Plant Based Burger. The long-standing vegetarian products — the Organic Veggie Burger and Organic Veggie Burger Bites — are now completely vegan. You can also pick up plant-based protein staples like tofu, Gardein, and Field Roast as well as pantry mainstays like dairy-free milk.

The chain has also made efforts to offer more vegan food at its cafes. Its famous Polish hot dog was taken off the menu last July to make room for healthier options, like açaí smoothie bowls and plant-based protein salads.