In February—at the 92nd Annual Academy Awards—actor and longtime vegan Joaquin Phoenix gave an impassioned acceptance speech for his Best Actor win. He took home the Oscar for his performance in “Joker.” But the crux of his speech wasn’t about the role or the film. It centered on the notion that people must fight against injustices. One such injustice he highlighted was the milk industry and its unethical and inhumane practices.

“We’re talking about the fight against the belief that one nation, one people, one race, one gender, or one species has the right to dominate, control, use, and exploit another with impunity,” Phoenix said.

He continued: “I think we’ve become very disconnected from the natural world. We feel entitled to artificially inseminate a cow. And when she gives birth we steal her baby, even though her cries of anguish are unmistakable. And then we take her milk that’s intended for the calf and we put it in our coffee and cereal.”

The UK’s Advertising Standards Agency (ASA) recognized this sentiment long before Phoenix’s speech. In 2017, the ASA sided with Go Vegan World in a landmark decision. The ASA ruled the organization’s “Humane Milk is a Myth” ad was not misleading.

The ad had drawn criticism from the dairy industry. It was the subject of seven different complaints, including one from the National Farmers Union (NFU).

The NFU argued that milk is humane. “Sadly, adverts like this one fail to recognise the high standards of animal welfare farmers adhere to. British dairy farmers take the health, welfare and well-being of their cows and calves very seriously,” NFU board chairman Michael Oakes said in a statement.

So, Is Milk Humane?

“Nearly all cows used for dairy in the U.S. live on cement or dirt floors in factory farms. They constantly cycle through pregnancy, birth, and milking—like milk-producing machines,” she explained.

A 2011 study found that cows are capable of feeling complex emotions. It found that cows have the ability to form close friendships. They also experience anxiety when separated from one another. Additional research conducted in 2015 indicates that separating calves from their mothers at too early a stage in their life can have a serious effect on their socializing abilities later in life. 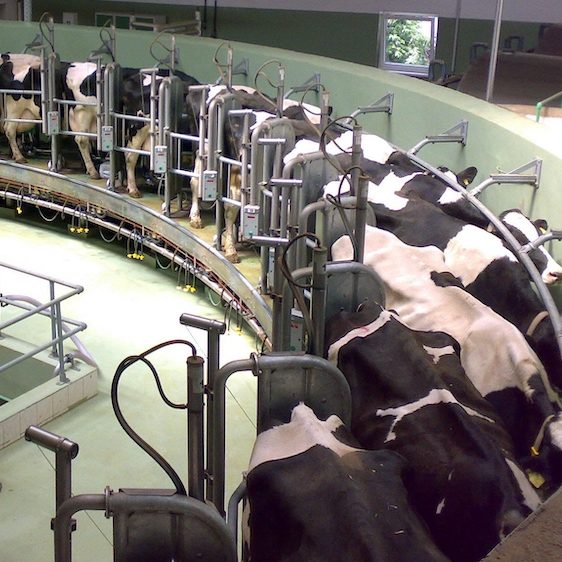 What Are Standard Milk Practices?

According to Torgerson-White, many of the dairy industry’s practices are also inherently inhumane.

“Cows in U.S. dairies are forcibly impregnated, a highly invasive and stressful procedure, about every 12 months,” she explained. Dairy farmworkers deposit male semen, which was obtained by artificial means, into the female genital tract.

Torgerson-White continued: “Once a cow gives birth, her calf is stolen from her, typically within hours, causing immense emotional suffering for mother and baby.”

The calves are fed milk replacers and once they are old enough, replace spent cows in the production line.

“Around age four, their productivity declines, and they are deemed ‘spent.’ They are sent to slaughter, typically to become ground beef. A cow’s natural life span is up to 20 years.” Torgerson-White explained. 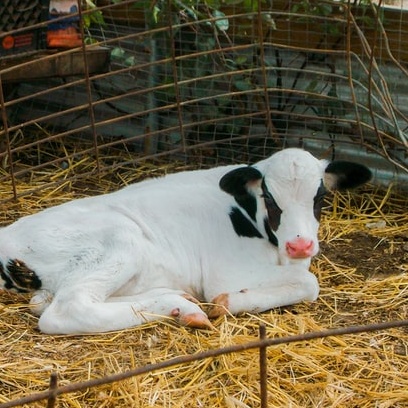 The Fate of Male Calves

For male calves, their fate is often much more severe. Farms send male calves to veal farms since they cannot produce milk.

Veal calves are typically slaughtered between the ages of 16 and 18 weeks. Approximately 15 percent of all processed veal in the U.S. comes from calves killed before they’re three weeks old. Farmers refer to these calves as “bob” veal. They use them in low-grade meat products, such as frozen dinners and hot dogs.

“Male calves are useless to the industry, so dairy farmers sell them for their tender flesh known as veal or sometimes bludgeon them to death,” said Torgerson-White.

She added: “[At] veal farms [they] are confined in small individual crates, unable to turn around or lie down comfortably. By the end of their 18–20 weeks of life, many calves are so weak from prolonged immobility and nutrient-deficient formula that they can hardly walk.” 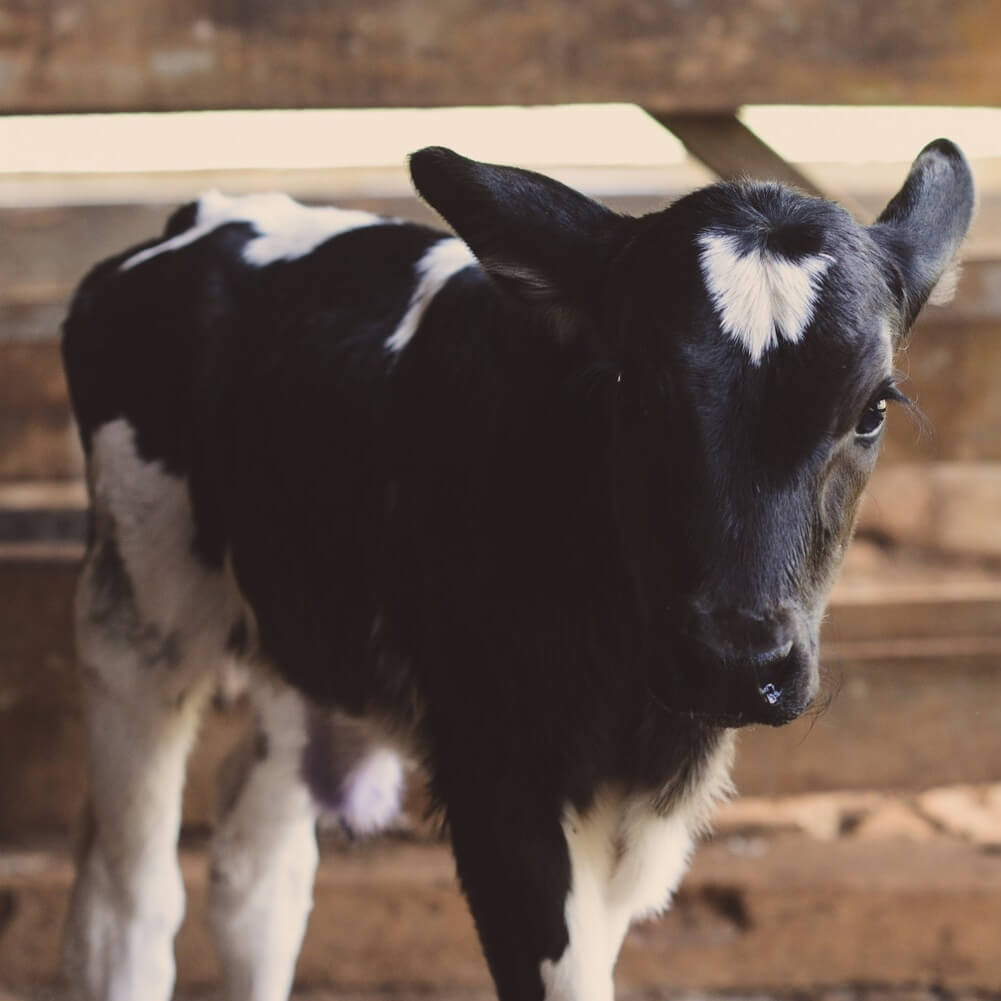 The dairy industry has received major backlash over the years.

A number of undercover investigations by animal rights groups have exposed egregious abuses and deplorable living conditions in the dairy industry. Organizations include MFA and People for the Ethical Treatment of Animals (PETA), and Animal Recovery Mission (ARM).

Some investigations by Mercy for Animals have exposed dairy workers dragging downed cows by their necks with ropes attached to tractors. The organization’s investigations have also exposed workers stabbing cows with pitchforks and punching animals in the face.

Phoenix isn’t the only celebrity to speak out against these practices. In 2019, Singer Billie Eilish took to Instagram to share a video of an ARM undercover investigation into Fair Oaks Farm. The dairy farm supplies the Coca-Cola distributed Fairlife milk brand.

The video shows workers stabbing, beating, and mutilating calves. Eilish wrote alongside the video in an Instagram story: “I keep my mouth shut most of the time about this because I believe everyone should do eat and say whatever they want…. And I don’t feel the need to shove what I believe in, in anyone’s face.”

She added: “If you can watch the videos that I just posted and not give a f*ck that it’s you contributing by literally eating the creatures that are being fully tortured just for your pleasure, I feel sorry for you.”

“Not only is dairy not ‘essential,’ factory farming, including dairy farming, is a breeding ground for disease. If the current pandemic has taught us anything, it’s that raising and killing animals for food is a global health risk,” Falco wrote in a New York Daily News op-ed. 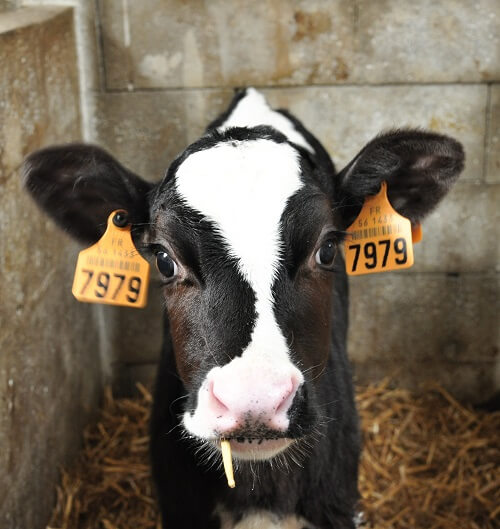 According to USDA regulations, producers can label milk as “organic” if the cows have not been given antibiotics or hormones.

In order to receive an organic label, organic milk farmers must also put their cows out to pasture throughout the year for at least 120 days. An organic cow’s diet must include 30 percent pasture grazing.

Sarah Higgins—the director of Go Vegan World—believes this type of labeling is pointless. She told Natural Products Global: “[No] matter where the milk and dairy products they purchase have come from, whether an industrial-scale dairy farm or a smallholding, for each cow, legal, standard practice necessitates her pregnancy, the removal of her calf, and her slaughter, so that we can drink the milk that she produced to feed her infant.”

Beginning in 2005, The Cornucopia Institute, a food and farm policy watchdog group, claimed the largest organic dairy producer in the U.S.—Horizon Organic—was not actually organic. Cornucopia accused Dean and WhiteWave, which provide milk to Horizon, of confining cattle in pens and buildings instead of providing the animals with adequate access to pasture and grazing, as required by the USDA.

In 2014, Cornucopia filed its third formal legal complaint with the Federal Trade Commission. The institute asked for an investigation into Dean Foods’ advertisements for its Horizon milk.

“There is no statute of limitations in terms of enforcing federal organic standards,” Cornucopia’s former Senior Farm Policy Analyst, Mark Kastel, said in a statement.  “We are asking the USDA to reopen our original complaints and fully investigate our new allegations that the cows on this dairy produced unreasonable amounts of milk-based on skirting the requirement that they be fully grazed.” 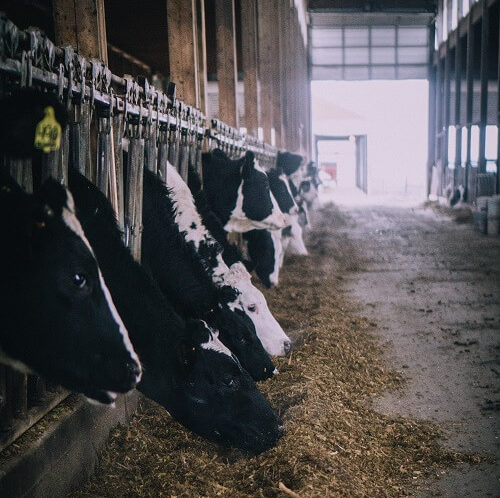 Milk sales are on the decline.

Conventional Milk Sales on the Decline

Since 1975, the consumption of milk has declined by 40 percent, according to the US Department of Agriculture.

Dean Foods—America’s largest milk producer—was forced to file for Chapter 11 bankruptcy last year. The company said its mounting debts were the result of declining milk sales. The Dallas-based dairy company Borden Dairy followed suit. It also filed for bankruptcy at the start of this year.

And while conventional dairy sales plummet, the sale of plant-based milk products has been steadily increasing. The plant-based dairy market is projected to grow from $17.3 billion in 2018 to nearly $30 billion by 2023, according to research firm MarketsandMarket.

The firm found more consumers are ditching conventional dairy. They are opting for plant-based milk instead because of the health benefits of a vegan diet.

With so many plant-based milk options readily available like soy, almond, and cashew milk—ditching dairy is easier than ever. And, according to Phoenix, living cruelty-free doesn’t have to come at the cost of animals or the planet.

“We fear the idea of personal change because we think we need to sacrifice something; to give something up,” Phoenix said in his Oscars speech. “But human beings at our best are so creative and inventive, and we can create, develop, and implement systems of change that are beneficial to all sentient beings and the environment.”