Crispy M&M’s were first introduced in 1999 — slightly larger-than-average M&M’s with a crunchy wafer center covered in milk chocolate with the usual candy coating. Mars discontinued Crispy M&M’s (in the US, but not in Europe) in 2005, only to bring it back in 2015.

In its 77-year history, Mars has never launched a vegan-friendly version of one of many people’s favorite candies. But UnReal, a candy company founded by brothers Kris and Nicky, whose parents prohibited them from snacking on chocolates, has stepped up to the plate. Its Dark Chocolate Crispy Gems feature “quinoa crisp” enveloped in vegan dark chocolate and a candy coating. 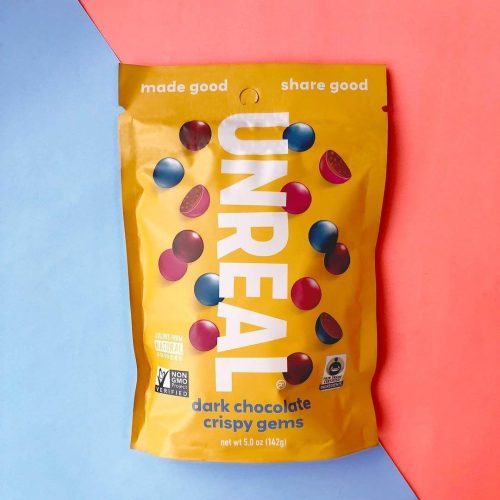 Which Candy Is Vegan?

Boulder, Colorado-based brand Cocomels makes dairy-free caramel. Surf Sweets has some gelatin-free gummies and SmartSweets is free from sugar and mostly gelatin-free. ZolliPops, a sugar-free vegan candy company run by 13-year-old CEO and founder Alina Morse, is stocked at more than 7,500 stores across the US and reportedly rakes in $6 million a year.