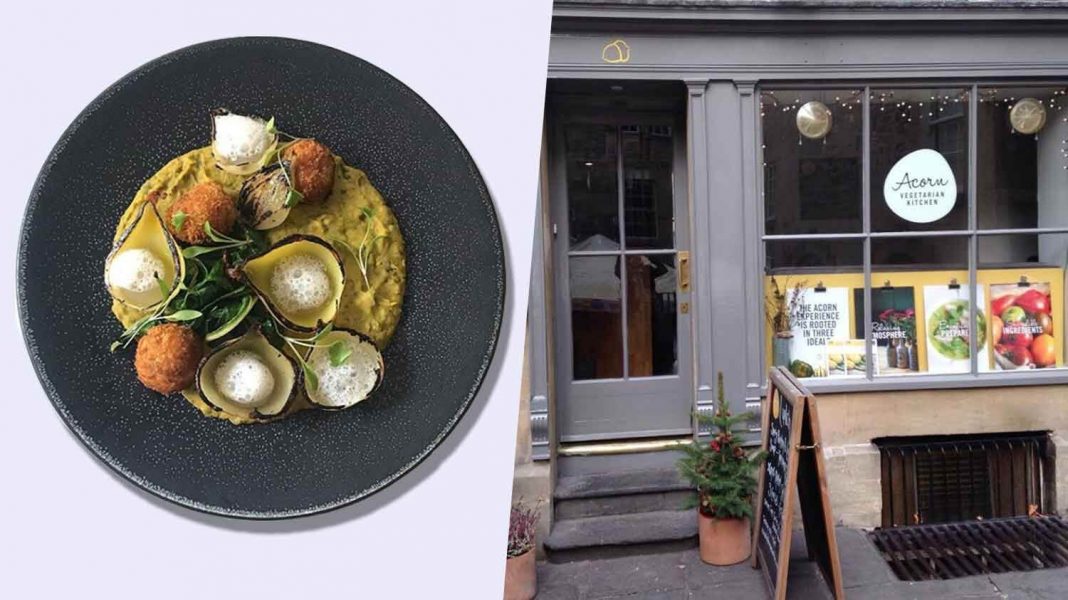 One of the UK’s top vegetarian restaurants managed to completely ditch dairy from the menu without anyone noticing.

Acorn in Bath decided to go completely vegan towards the end of 2018; meat was never on the menu, but after owner Richard Buckley realized the impact of the dairy industry, he decided to quietly remove all vegetarian items from the menu.

“We were already almost there, being about 80 to 90 percent vegan,” Buckley told Somerset Live. “Then it just seemed fun to go all the way and see if we could do it so well that nobody would notice.”

When Buckley removed dairy, he didn’t attempt to veganize any previously vegetarian dishes. Instead, he chose to just replace them with new innovative plant-based recipes. The current menu includes mains like Mushroom Parfait with Celeriac and desserts like Slow Poached Quince with Walnut Sorbet.

Cepe cavatelli in a truffle and pine nut ? cream with chanterelle mushrooms, pea purée and grated summer truffle – as one customer complained "I thought the gnocchi were too tough, like pasta"… sigh, sometimes I do wonder… #foodporn #vegansofig #vegan #plantbased #whatveganseat #veganfinedining #plantbasedchef #cheflife

“It was amazing, nobody noticed,” he added. “We even had the founder of [animal rights organization] VIVA! Juliet Gellatley come in shortly after we did this and even she didn’t spot it.” He added, “we weren’t trying to trick people, just trying to make good food.”

After three or four months of slyly serving the new menu, the news got out, with many customers posting about the restaurant’s 100 percent vegan offerings on social media.

Customers aren’t the only ones impressed by the newly plant-based restaurant’s food; Acorn is currently the first-ever vegan restaurant in the UK to achieve recognition by the Michelin Guide. it also landed a spot in Big 7 Travel’s World’s Top 50 Vegan Restaurants, reaching number 11.

“I think it is a real validation of how far vegan food has come that people aren’t looking for lumps of animal protein and fat to make a meal, but are instead looking for interesting ideas and quality ingredients across the board,” Buckley said.

Although Buckley and the team are pleased that the news about their vegan menu is finally out, the transitionary experience was “wonderfully fulfilling.” He continued, “[we proved] that you could easily continue to prosper as a quality restaurant without having to have any ethical compromise on your plates.”