Comedian and “The Daily Show” correspondent Roy Wood Jr. tried a $50 chicken nugget during a recent segment on the future of the meat industry.

“We all know that Americans love the hamburger,” the segment opens. “But now, scientists are trying to cancel beef.” A clip from a CNN segment on beef’s impact on the planet backs up the claim.

Wood sits down with author Michael Pollan, author of the 2006 book “The Omnivore’s Dilemma” and “the Obi-Wan of food writers,” who says that eating beef is as harmful as burning fossil fuels.

“Of all the things we do that contributes to climate change, beef is really right at the top,” Pollan explains. “The animals produce greenhouse gas –“

“You mean farts? You can just say farts,” Wood interjects. Pollan clarifies that cows emit greenhouse gases through burps, to which Wood succinctly counters: “A burp is a mouth fart.”

According to Pollan, while we can’t convert the energy system to sustainable alternatives, “we can all slightly modify our diet.”

Wood pushes back with a slippery slope argument — asking people to eat less meat to lower their carbon footprint devolves into making meat illegal, underground meat markets, and “the next thing you know, you’re sucking (censored) for a Baconator behind a Walgreens.”

Pollan says that this future is a “maybe,” then suggests trying plant-based burgers to stave off meat cravings. “There’s this new generation of very sophisticated food science,” Pollan explains, which makes vegan burgers look and taste like the real thing.

The 64-year-old author is a longtime supporter of “real food” — whole, unprocessed foods like beans, legumes, fresh produce, and small amounts of meat. But, he recently changed his mind, and now sees the appeal of food tech-made vegan meats.

In a December 2018 interview with Mashable writer Chris Taylor, Pollan said that while he doesn’t consider the Impossible Foods burger “food” by his standards, he’s not against it. Pollan acknowledged it as a means for those looking to eat more sustainably without giving up beef. Over the past few years, Impossible Foods meat has proliferated the fast-food market, earning a permanent place on the menu at Burger King, White Castle, and Red Robin.

Wood’s quest for answers leads him to a meeting with Pat Brown, the CEO and founder of Impossible Foods, who explains the company’s mission of making animal products obsolete by 2035 by making plants taste like meat. He explains, “The thing that makes meat taste like meat is–“

“The pain from the cow dying,” Wood says matter-of-factly. Brown clarifies that “it’s actually a molecule called heme,” which can be derived from plant-based sources such as soy.

On the verge of an existential crisis (“So, my whole life has been a lie,” Wood says), the “Daily Show” correspondent sets out to decide which burger is better: a traditional “farting cow burger” or “the stupid nasty-a** plant sandwich.” As it turns out, he can’t tell the difference. 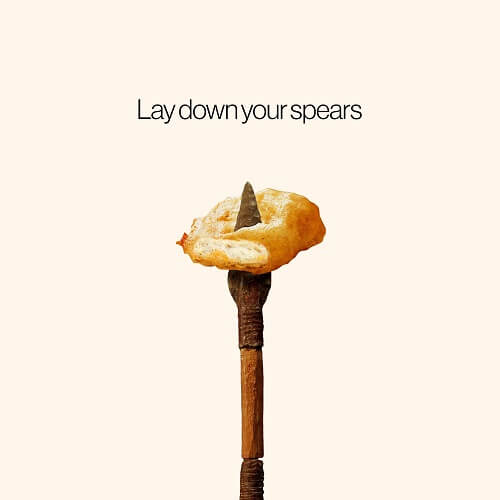 Just aims to create cell-based meat for the sake of the planet. | Just

Real Meat, Without the Consequence

Wood’s mind becomes a battle between a talking steak and a head of lettuce, the former claiming that he’s “too old to switch sides” and the latter ready to go vegetarian. Frightened by food tech, he claims that he needs to find “real meat” that isn’t bad for the environment and ends up at San Francisco-based Just.

Just is known for making the Just Egg and vegan mayonnaise, but the company is also working toward creating “clean meat” — now known as “cultured” or “cell-based” –, real meat grown from animal cells. By using cellular agriculture, Just and other companies can grow meat in a bioreactor.

Wood is skeptical of CEO and founder Josh Tetrick’s explanation of the process, but Tetrick insists, “When you taste it, you’re gonna see. This is real meat without the consequences that come from killing lots of animals”

The “Daily Show” comedian agrees to try “nerd Superman’s” “freakish clone meat” grown using cellular agriculture — a chicken nugget — and is sold on the taste. At the moment, a single cultured chicken nugget costs $50, but Just is working on making the process scalable.

“So the clone burger is years away, but even then, it might cost as much as a Volvo,” Wood laments.

The price has already gone down — earlier this year, Tetrick appeared in a Daily Mail segment, where he told a reporter that one chicken nugget costs $100 to make.

Closing the segment, Pollan suggests a simple solution to “broke-a** carnivores” like Wood who want to eat more sustainably: eat meat once a week and “see how you feel.”

[Editor’s Note: This article was corrected to clarify that cultured meat is not vegan, it is real meat made from animal cells.]