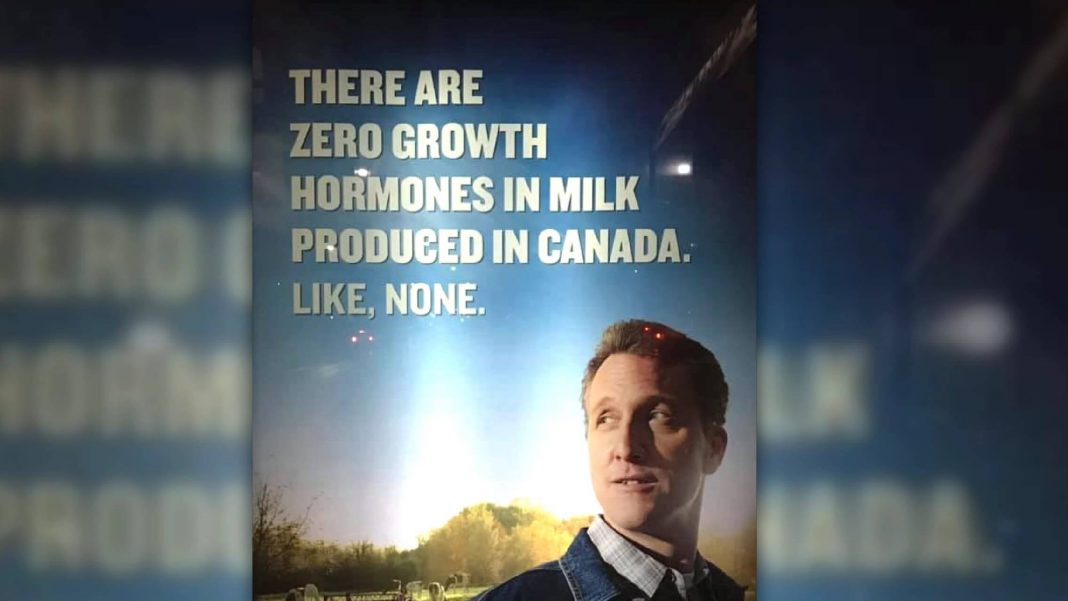 An advocacy group for dairy farmers was recently forced to pull a misleading advertisement claiming there are no growth hormones in Canadian milk.

The advertisement – run by the Dairy Farmers of Canada – shows a farmer in front of a field with the message “there are zero growth hormones in milk produced in Canada. Like, none,” written out in the clouds.

Jenny McQueen, an animal rights activist from Toronto, is one of many who submitted a complaint to Ad Standards, BNN Bloomberg reports. Her response from the regulatory body read, “We were informed by the advertiser that, upon receipt of your complaint, the ad has been permanently withdrawn.”

BREAKING: @DairyFarmersofCanada ads falsely claiming no growth hormones present in Canadian milk have been removed after complaints filed by advocates with the assistance of Animal Justice! ? (Swipe right to see the ad) We were SHOCKED when we learned of a dairy industry transit ad campaign attempting to dupe Canadians into believing that Canadian milk is hormone-free, when it contains IGF-1, a naturally occurring growth hormone present in all cow’s milk, designed to rapidly grow a newborn calf into a thousand pound adult. After it was brought to our attention by concerned citizens, we were quick to help the public file complaints to Ad Standards on the basis of false advertising. We’re so pleased that the deceitful ad campaign was removed and that it would no longer mislead Canadians! It’s clear that Big Dairy is feeling the heat from its loss of profits and failing reputation. Compassionate consumers are increasingly choosing plant-based milks, which are kinder to animals, healthier for our bodies, and better for the environment!? . To read our new blog post and to share it with others, click the link in our bio ☺️ Please join us in celebrating this victory for animals! ?

Animal Justice praised the move by the board. “We’re pleased that the truth prevailed,” it wrote. “And that this unlawful, misleading messaging will no longer appear on transit stops across the country.”

The ad’s intention was to share the truth about the dairy industry and clear up misconceptions regarding the health consequences of consuming dairy products.

Dairy consumption is linked to a number of chronic health issues, including cancer and heart disease. In contrast, a growing number of studies have shown that a plant-based diet is one of the healthiest ways to eat. Concerns over these risks have led to the growth of the vegan milk market, which, according to Animal Justice, now accounts for 10 percent of all Canadian milk sales.

The latest version of Health Canada’s nutrition guide, released earlier this year, saw dairy as a food group nearly scrapped completely, emphasizing consuming more plant-based food than it has in the past.

The guide received backlash from dairy industry workers, who said the new updates would cause consumer’s confusion over the nutritional value of dairy. But Health Canada stood by its decision.

In a statement, Hasan Hutchinson, a representative for the government organization, said, “regular intake of plant-based foods, so vegetables, fruit, whole grains, and these plant-based proteins can have positive effects on health.”