As the popularity of plant-based nutrition has grown, one vertical that has been leading the charge is dairy-free milk. And leading the helm is almond milk. Between 2010 and 2015, the market for almond milk surged by 250%.

Research in 2017 from Mintel shows an increase of non-dairy milk sales by 61 percent since 2012 and are still estimated to reach $2.11 billion in 2017. Comparatively, the average American in 1975 consumed 130 liters of dairy milk versus 149 liters in 2017 during which time milk sales have fallen 15% since 2012. While soy milk (13 percent market share) and coconut milk (12 percent market share) and other plant-based milk alternatives (like hazelnut, peanut, tiger nut, walnut, cashew, coconut, hemp, spelt, quinoa and pea – just to name a few) make up this category, almond milk with 64 percent market share is far and away the frontrunner.

This steady growth of non-dairy milk over the past couple of years is nothing new as the notion of milking plants actually goes all the way back to the 13th and 14th centuries. In the Kitab al-Tabikh a Baghdadi cookbook from 1226 there is the earliest mention of almond milk while in China soya milk has been made since at least the 14th century. But it wasn’t until the Plantmilk Society which was established in London by Leslie Cross in 1956 that a dairy replacement really took shape. From Belgian food tech Philippe Vandemoortele who decided to use a new packing technology in 1981 to sell soya milk to the late ’90s when WhiteWave moved the product to the refrigerated aisle alongside the dairy milk, the boom began. The rapid growth of soya was short-lived and in 2008 Blue Diamond Growers sensed an opportunity for capturing the market.

Blue Diamond Growers’ milk brand, called Almond Breeze, lagged behind Silk, then America’s leading soya brand, but thanks to a partnership with the second largest dairy in the country and new research into the health benefits of almonds, the effect was almost immediate. The California almond industry in the years from 2008 to 2013 went on a blitzkrieg marketing and publicity campaign which ended with magazines proclaiming almonds as a superfood and in 2013, almond overtook soya as the best-selling plant milk in the United States.

Providing a creamy texture and nutty flavor, almond milk has come a long way to now be widely accessible at most grocery stores and coffee shops with numerous varieties and flavors.

Almond milk is lower in calories and carbs, it has no cholesterol or saturated fat. Almond milk has become a healthy alternative for those who are lactose intolerant, vegan or for those just looking for a healthier alternative to milk. Naturally containing vitamin E and B along with manganese, magnesium, calcium, iron, phosphorus, copper, zinc, and it also includes monounsaturated healthy fats.

Although the caloric content of almonds themselves are known to be high, the way almond milk is processed only leaves a small portion of the almonds present, perfect for those who want to cut calories and lose weight. Almond milk is also low in carbohydrate content as one cup (240ml) contains only 1–2 grams of carbs, while dairy milk contains 13 grams of carbs.

See the breakdown below of calories, fat, protein for each type of milk comparing an eight-ounce pour of each:

A main point of contention for those against drinking almond milk is the vast amount of water required to grow almonds and the fact that over 80% of the world’s almond crop is grown in drought-hit California (although the 2018-2019 rainy season officially pulled the state out of drought status). In an effort to combat this claim, Dennis Baldocchi, a professor at the University of California, Berkeley, in his Sustainable Food Trust report tilted The True Cost of American Food, argues that almonds can be grown elsewhere more cheaply and with less water.

Another measurable way to uncover the truly sustainable impact of almond versus dairy milk is its use of resources and emissions. According to the Short-Lived Climate Pollutant Reduction Strategy published in 2017, cows are responsible for 45 percent of methane emissions, far exceeding that of almond production. Furthermore, with California state regulations passing in 2016 that will require dairy farmers to reduce methane emissions by 40% from 2013 levels by 2030, it is an added cost to farmers.

According to Yale’s Journal of Industrial Ecology (JIE) two article with findings of almond production – can be downloaded for free here and here –have a remarkably small carbon footprint and can, in fact, have a carbon footprint 10 times smaller than that of dairy milk. In this multi-year study, researchers found that “1 kilogram of almonds produces less than 1 kilogram of carbon emissions. (For comparison, the Environmental Working Group estimated that beef causes more than 20 kilograms of CO2-eq emissions, cheese more than 10, and beans and vegetables around 2.)” The research did not directly address concerns about almonds water consumption but did note that “almond orchards can be a source of renewable energy and, as perennial crops, they store carbon during their life cycle — significantly offsetting carbon emissions in other stages of almond production.”

Available in a range of flavors, this almond milk gives you 50% more calcium than cow milk with no nasty fillers, GMOs, or fillers like carrageenan.

The original almond milk brand now comes in a variety of flavors. It offers both shelf stable and refrigerated options, too. 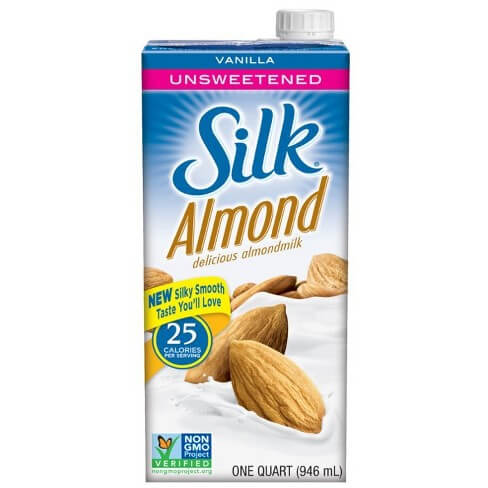 It got its start as a soymilk brand but it sure has come a long way. Almond is now one of its best-sellers. Taste the difference.

Not only is it so delicious, the milk is packaged in plant-based bottles, a first-to-market in the refrigerated dairy case.

This former New York dairy is now leading the charge in vegan milk made from nuts, seeds, and grains.

You won’t find any dairy in Malk’s milk and you also won’t find herbicides or pesticides in this organic almond milk.

Stock up on Pacific’s creamy, dreamy almond milk with a gentle roasted flavor.

Revolutionizing sourcing and flavor all at once. You can find New Barn at Whole Foods.

Get nutty and make almond milk at home with a few ingredients and a few kitchen tools. To prepare, you will need one cup of unsalted almonds, two cups of water (plus more for soaking) and optional flavoring for sweetening like vanilla extract or honey. And the once cumbersome process of grinding and straining becomes easy with the use of a blender and cheesecloth or nut bag. Yielding about one cup, these easy to follow recipe has three simple steps.

Step one: Place almonds in a medium-sized glass bowl and pour water over to completely cover the almonds. It is best to soak them overnight but for those in a rush, you can use boiled water to help plump the almonds.

Step two: The next morning you will notice that the almonds are both lighter in color and softer to the touch and have swollen to almost double the size. Drain and rinse the almonds under cold water and then place in a blender (For those wanting a bit of a sweeter taste, add your sweetener like vanilla extract or honey) with the two cups of water and blend until a smooth, cream-colored liquid forms.

Step three: Using a cheesecloth or nut bag, place over a strainer and strain the almond milk into a measuring cup, mason jar, or a glass ready to drink.