Vegans can now enjoy classic chocolate walnut whips, just in time for Easter. The dark chocolate version of the favorite, created by chocolate crafters Hadleigh Maid, are available across the UK.

Released earlier this year, the vegan chocolate whips come in three flavors — original, coffee, and mint — and have a “premium truffle filling,” according to the brand’s website. 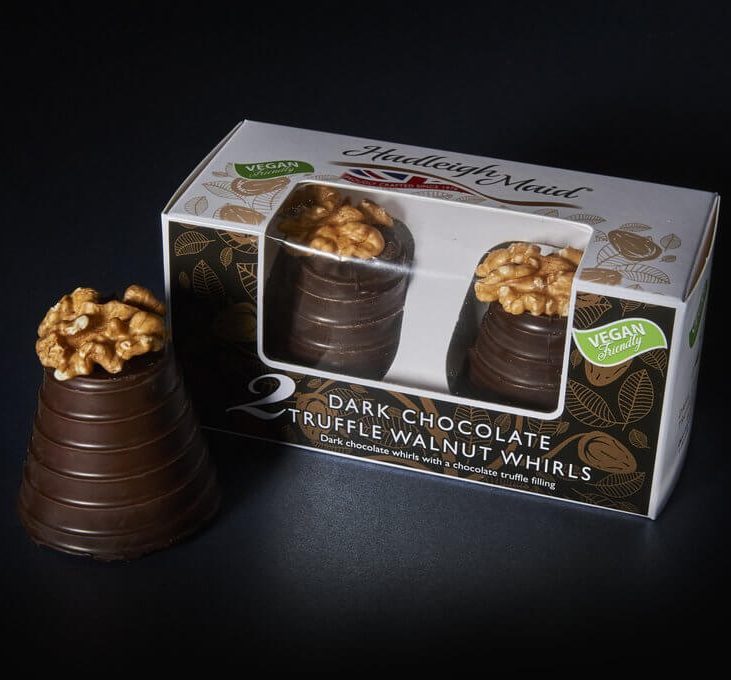 Much like the original classic chocolates, they have a light golden half-walnut on the top, something that Nestlé has now removed from its version.

The decision caused outrage among fans when the company announced it would re-release the chocolate in 2017 without the traditional topping.

At the time, The Guardian reported that food writer Deborah Robertson “tweeted for many when she wrote: ‘They’ve taken the walnut off the top of the walnut whip so now it’s just a whip and I don’t know who we are anymore.'”

The walnut whips are an addition to Hadleigh Maid’s vegan-friendly range, however, the brand also creates non-vegan chocolate too.

Hadleigh Maid isn’t the only confectionary company creating vegan-friendly options for its customers. Several well-known British brands have altered the recipes for their classic sweets to make them vegan.

Whether it means using sweet potato-derived colourings instead of cochineal, or finding ways around using gelatine, companies from Barratt to Swizzel Matlow are recognizing the change in their customers’ dietary habits.

Many supermarkets are now offering vegan chocolate, too.

Sainsbury’s recently announced it would be releasing a vegan strawberry and white chocolate Easter Egg alongside its usual options. The egg tastes like a strawberry milkshake, according to the brand.

Vegan chocolate brand Moo-Free also stepped up its game with its Bunnycomb milk chocolate egg, made with rice milk. Available at Asda, the brand also launched a Sea Salt and Caramel Egg in time for Easter.