The Los Angeles Dodgers are going dairy-free. And there’s a t-shirt to prove it.

Growing up, many of us were taught that milk does a body good – especially if you want to be an athlete. But in recent years, many professional athletes have cut dairy out of their diets – including seven members of the LA Dodgers. You can now even buy an officially licensed “Dairy Free” t-shirt styled like the team’s vintage logo.

According to The Athletic, Dodgers players Corey Seager, Max Muncy, Kiké Hernandez, Ross Stripling, David Freese, and Kenley Jansen have all gone dairy-free. The shirt features four of their names on the front.

The shift to a dairy-free diet happened at the advice of retired Dodgers second baseman, Chase Utley, who cut dairy out of his diet a few years ago as he approached 40 in order to fight signs of aging. The southpaw found that his new lifestyle came with other health benefits, alleviating his chronic pain and inflammation.

According to SBNation, Utley advised his teammates to do the same and other Dodgers players followed suit. Hernandez went dairy-free after the 2017 season. Seager, who cut dairy out of his diet while recovering from surgery last August, lost nearly 30 pounds prior to reporting for spring training last week. He credits his new diet for allowing him to still exercise while in recovery. 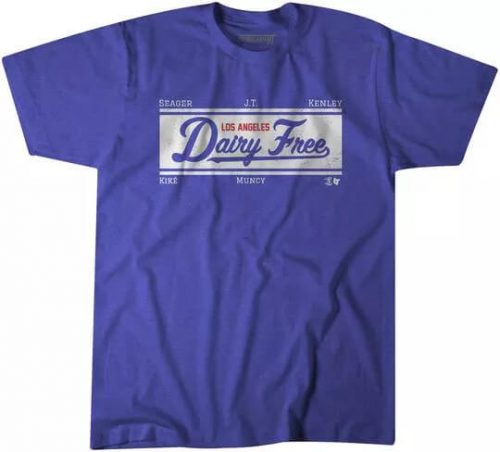 Twenty-eight-year-old infielder Muncy said that the weight loss and reduced inflammation was a big enough “selling point” to convince him to go dairy-free as well.

“You’re talking about playing 162 games in 180 days. You’re talking about wearing cleats for all of those, which hurts your feet. Everything hurts. Anything you can do to gain an edge and make your body feel better on a daily basis, why wouldn’t you try it?,” Muncy told The Athletic.

The Dodgers join a growing number of athletes across all sports who are cutting out dairy for the health benefits.

Fifteen members of NFL’s Tennessee Titans adopted a plant-based meal plan with the help of Chef Charity Morgan, wife of linebacker Derrick Morgan. Athletes cited reduced inflammation, higher energy levels, faster recovery, and better performance on the field. “It’s been good. I still love it. I feel great. It helps me keep my weight down, too, because it can get too high in offseason as I eat a little bit more,” said defensive tackle Jurrell Casey.

Héctor Bellerín right-front for the English soccer team Arsenal, also credits his health improvements to a plant-based diet. “I always had a little problem with my ankles when I had played very hard games they would get a bit inflamed and stiff, and now I don’t even have to strap them to play anymore,” he said.

Olympic weightlifter Kendrick Farris, the only American male to compete in the 2016 Rio games and a vegan since 2014, told LIVEKINDLY last October that he suffered from symptoms of lactose intolerance for years.

When he ditched dairy, his performance and recover improved. He now campaigns for Switch4Good, which aims to educate athletes about how dairy affects health and how to swap it for plant-based versions. “Many athletes are quietly making a move to dairy-free alternatives regardless of propaganda to keep everyone on the hamster wheel,” he said, referring to the dairy industry’s “Got Milk?” campaign.

The Dodgers “Dairy Free” t-shirt is available on BreakingT.