A glass of milk is as American as apple pie. Images of milk-mustachioed celebrities and athletes became part of popular culture and we were all taught that milk builds strong bones. The food pyramid, introduced in 1992, once recommended that adults consume two to three servings of dairy products a day.

It was replaced by MyPlate food guide in 2011 and while the new dietary guideline still included dairy, it states that “calcium-fortified” dairy alternatives are also suitable. Sales of dairy alternatives are at all all-time high in the U.S. According to the Good Food Institute (GFI), a nonprofit that works to accelerate vegan alternatives to animal-based products, plant-based milk sales reached $1.9 billion in 2019.

But, it’s still mandatory for public schools to offer a carton of milk at lunchtime—a policy that groups including the American Medical Association have pointed out is racist—and dairy groups continue to maintain that milk is necessary for a healthy diet. But the U.S. dairy industry, one of the largest in the world, is now struggling. Why is that? 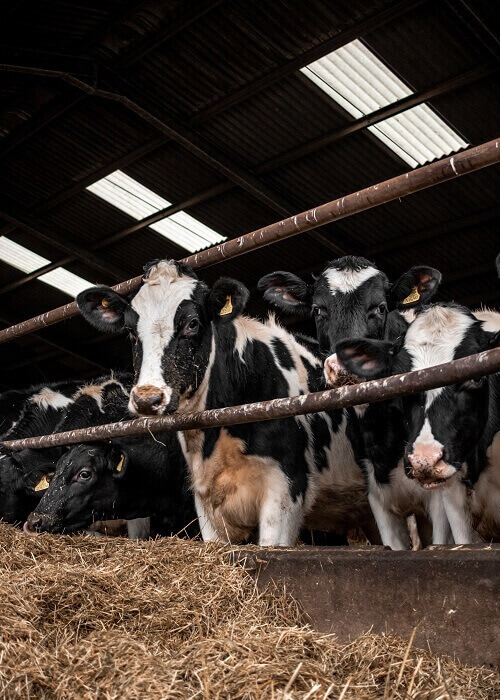 The milk industry is struggling.

Why Is Dairy Collapsing?

According to the United States Department of Agriculture (USDA) data, per capita fluid milk consumption has plummeted 40 percent since 1975. That year, Americans drank 247 pounds of milk per person. In 2018, that number dropped to 146.

As milk consumption has declined, dairy farms are shutting down. But, attributing it entirely to the increased availability of plant-based alternatives made from soy, almonds, coconut, cashews, oats, and more isn’t entirely accurate. The dairy industry was fueled by technological advances like pasteurization, refrigerated shipping, manufacturing, and commercialized cattle feedlots in the 20th century. Once made up of local businesses, dairy went national—it evolved into Big Dairy.

But, that wasn’t all. In 1977, President Jimmy Carter subsidized the industry with $2 billion in four years, which incentivized farmers to produce a surplus of milk. Any milk that couldn’t be sold was purchased by the government and turned into cheese, butter, and dehydrated milk powder. This led to a 500 million pound stockpile of cheese sitting in warehouses across the country. In 1983, president Ronald Reagan gave away 30 million pounds of pungent “government cheese.”

The overproduction issue didn’t end. In June 2018, the stockpile hit an all-time high: 1.39 billion pounds. “I anticipate that we’ll continue to set these records,” John Newton, director of market intelligence at the American Farm Bureau Federation, told the Washington Post. “We’re producing more milk. It’s inevitable. That milk needs to get turned into something storable.”

It’s true that people are drinking less dairy, but according to Quartz, the industry has also taken a hit from becoming a global industry, tied up in a complicated game of supply-and-demand. 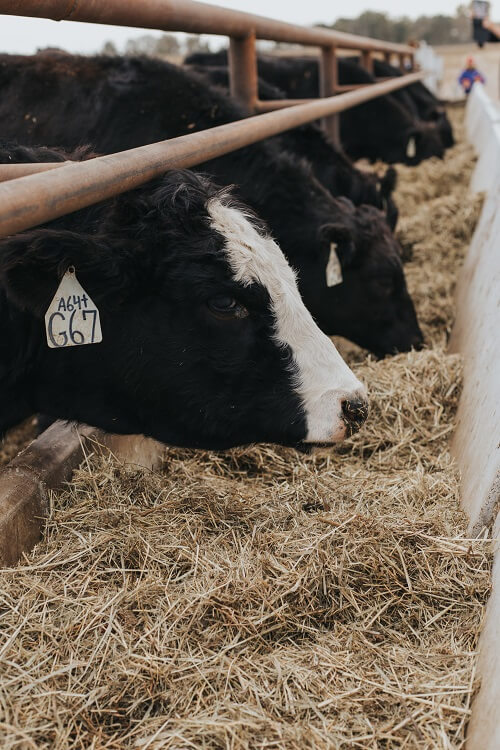 “You’re better off putting your money into trees.”

Dino Giacomazzi, of Giacomazzi Dairy, once the oldest dairy farm west of the Rocky Mountains, also attributed the industry’s struggles to the declining U.S. birth rate. “All you can do is try to produce milk at a lower and lower cost and all you can do is scale-up,” he said. “So the industry has been consolidating very rapidly.”

In October 2019, the 126-year-old Hanford-based dairy ceased operations. It auctioned off its herd of 2,000 cows due to the expense of upgrades. Now, the farm is using the space for almond groves. “Over the last 5 years, it’s been very difficult to make money in the dairy industry, [due to] regulations, increased cost of labor, low milk prices,” he told ABC.

Cornell Kasbergen, a dairy farmer in Tulare County, agreed. “You’re better off putting your money into trees… almonds, pistachios, grapes. There’s a lot of alternatives that provide a higher return than milking cows,” he said.

Wisconsin, one of the country’s top dairy producers, is losing an average of two farms a day. “Bankruptcies are up. Wisconsin is attributed as the No. 1 bankruptcy in the nation right now when it comes to dairy farmers. That number is up, I think, 24% from last year already,” Patty Edelberg, vice president of the National Farmers Union, told Yahoo Finance last December.

It’s not only family farms that are feeling the pinch. Dean Foods, the nation’s largest dairy producer, filed for Chapter 11 bankruptcy protection last November after a yearslong decline in consumption. But, this may not affect distribution—the company is in “advanced talks” with the Dairy Farmers of America (DFA), the largest U.S. dairy cooperative, for a possible deal.

As of earlier this month, federal antitrust regulators are investigating the matter, per the Wall Street Journal. An acquisition would mean that DFA would control more than 60 percent of milk sales in upper Midwestern markets.

Last month, the 165-year-old Dallas-based Borden Dairy Company also filed for Chapter 11 bankruptcy. Chief Financial Officer Jason Monaco said in court papers that this was due to a boom in vegan milk, the rising price of raw milk, and retailers launching their own, more affordable milk products. 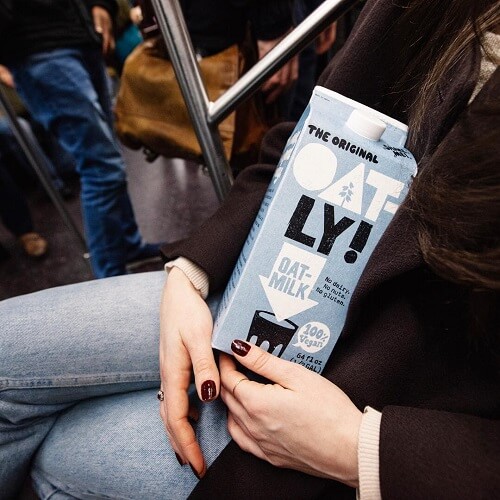 Dairy Alternatives on the Rise

Why? According to GFI, vegan milk is the “most developed” out of all plant-based categories.

Vegan milk is also the one category that’s consistently placed next to the “real thing”—in any grocery store, you’ll find rows of dairy-free options right next to cow’s milk. Beyond Meat helped pioneer stocking vegan meat next to the real thing. But, veggie burgers are still typically relegated to their own section. Dairy-free milk had a head start, though. While it used to be stocked in the shelf-stable of the grocery store, it moved into the refrigerated aisle more than a decade ago.

Health is another driving factor in choosing vegan milk over dairy, according to a 2018 Mintel report. The jury is out on whether or not the calcium in milk actually prevents osteoporosis—the weakening of bones—according to the Harvard T.H. Chan School of Public Health. There is a growing concern over whether or not the bovine growth hormones in milk increase the risk of certain cancer. Dairy products are also associated with hormone-related conditions, such as acne and premature puberty, according to Dr. Michael Greger, author of the 2015 book “How Not to Die.”

Innovation will also drive sales. Almond milk remains the firm favorite. But oat milk, which surged in popularity when Swedish brand Oatly made its U.S. debut in late 2016, is the fastest-growing category. From April 2018 to April 2019, it grew 222 percent. 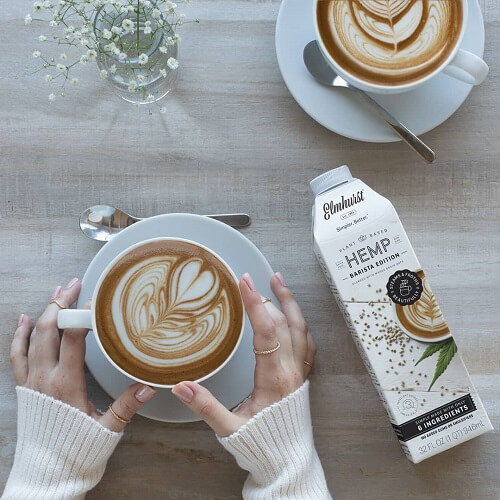 From Milk to Plants

Speaking at the 2020 Dairy Forum last month, Hamdi Ulukaya, CEO and founder of Greek yogurt brand Chobani, said: “Who messed up the identity of dairy, the nutrition side of it?” he asked. Ulukaya blamed dairy companies that have launched vegan milk products for consumers choosing alternatives. “We have dairy companies are launching this type of product and calling it ‘milk’ and promoting it.”

He’s right about that. Multinational food corporation Danone—which owns Danone, Oikos, Activia, and International Delight—owns the vegan brands Silk and Alpro, which make dairy-free milk in addition to other products. Nestlé, the world’s largest food company, owns Coffee-Mate, which launched a range of vegan creamers made from almond, coconut, and oat milk. It launched an oat milk version of its classic dairy-based chocolate drink Nesquik earlier this year.

HP Hood, one of the nation’s largest and oldest dairy operations, launched “Planet Oat Oatmilk” last year. Like many dairy-free milk options, it’s fortified with calcium, vitamins A and D, and vitamin B12 to make it nutritionally comparable to the real thing.

Chobani launched oat milk last year, but you won’t find “milk” on the label. The carton reads “Chobani Oat” and the website describes it as an “oat drink.”

The future may see companies that have completely switched over to plants. Elmhurst 1925, once one of the largest dairy companies in NYC, stopped selling cow’s milk in 2016. It was the city’s last dairy plant and milk was no longer profitable, but it wasn’t the end. Instead, it pivoted to vegan milk. Elmhurst’s first line of cold-milled nut-based milks launched in 2017. Since launching, it has added oats and hemp to its product lineup.

CEO Henry Schwartz told Food Republic in 2017 that it hasn’t affected business. “We have not seen any customer confusion,” he said.

He continued, “And in fact have seen many former Elmhurst Dairy customers embrace our new beverages as they trust our brand name and recognize that we are still delivering a delicious product that happens to be made from plants instead of dairy.” 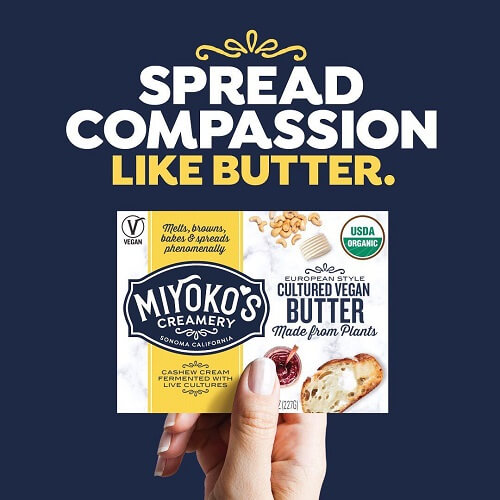 Is working together the solution?

Oat milk brand Hälsa Foods announced a similar initiative. It aims to help organic dairy farmers convert to growing oats. The first farm to do so will be a 300-acre farm in Hoosick, New York. 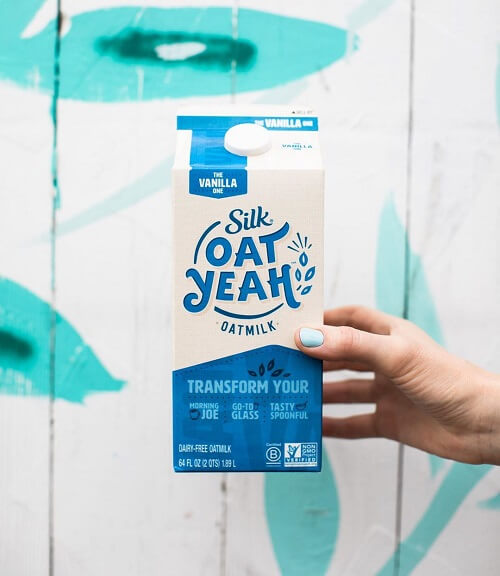 Should vegan milk be labeled “milk”?

As plant-based food gains traction, animal agriculture industries and lawmakers are responding to the perceived threat. A growing number of states have introduced legislation that would ban vegan products from being labeled “burger,” “sausage,” and more.

Arkansas made an attempt with Act 501, which would have forbidden this even with qualifies like “vegan” or “plant-based.”

Vegan meat brand Tofurky, the ACLU, the ACLU of Arkansas, GFI, and the Animal Legal Defense Fund filed a lawsuit last July, citing that the law violates the First and Fourteenth Amendments. A federal court blocked the law last December. The block will remain in effect as the lawsuit proceeds.

“Such a position requires the assumption that a reasonable consumer will disregard all other words found on the label. That assumption is unwarranted,” said U.S. District Judge Kristine G. Baker.

Similar laws are pending in Missouri and Mississippi. Montana, Wyoming, and South Dakota have passed such laws. A federal bill, the Real Marketing Edible Artificial Edibles Truthfully Act of 2019, (aka The REAL Meat Act) was introduced last October. 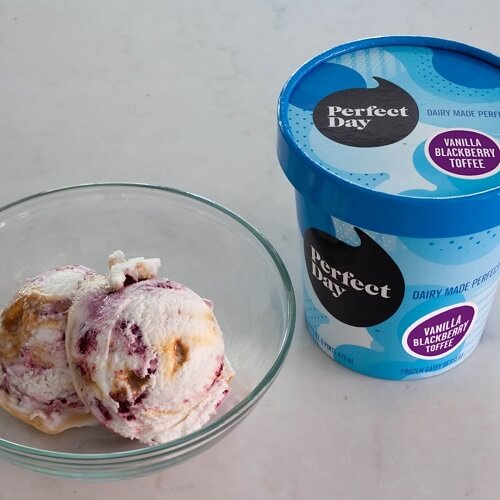 The Future: Collapse In 30 Years?

Does dairy have a future? According to RethinkX, a think tank run by technology, finance, and marketing experts, “by 2030, the U.S. dairy and cattle industries will have collapsed.”

The National Milk Producers Federation told Food Navigator that the authors are living in a “vegan fantasyland.”

Jack Bobo—who spent 13 years in the State Department working on global food policy and now works at food tech consultancy firm Futurity—said that it’s “incredibly unlikely” that a collapse will happen in the timeframe described.

But, is eventual collapse impossible? Maybe not. RethinkX highlighted the rise of microbial fermentation technology, which allows brands to create animal proteins, without the animal.

Clara Foods is doing this with egg proteins. Geltor is creating animal-free gelatin. And Perfect Day, New Culture, and Motif FoodWorks are doing it with whey and casein—the key proteins in dairy products. Perfect Day launched vegan ice cream using this technology last summer. New Culture has taste-tested its vegan mozzarella in a double-blind study, with positive results. Motif expects to launch its proteins in early 2021.

Through a fermentation process using yeast, these brands are working toward creating vegan products whose taste and textures are uncanny to dairy. And if plant-based products are functionally identical to the real thing, without the devastating impact on the planet or animals, who’s to say that isn’t the future?