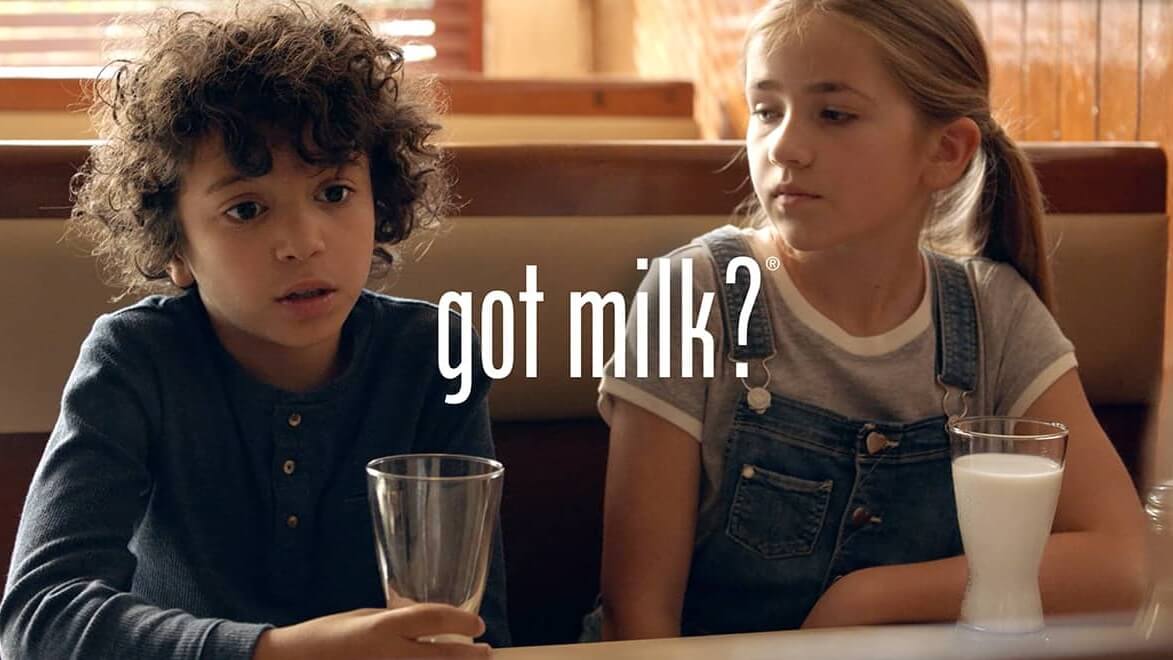 In an attempt to win over millennial and Latino families who are electing to buy vegan milk over cow’s milk, the dairy industry has revitalized the iconic “Got Milk?” campaign that rose to fame in the 1990s.

As reported by American advertising publication Adweek, the new campaign was developed by the California Milk Processing Board (CMPB), the creator of the original 1993 ad. The new dairy advertising package differs from the original campaign in that it does not leverage high-profile, milk-mustachioed celebrities celebrating the alleged health benefits of cow’s milk in order to appeal to consumers.

Rather, the CMPB has refocused its efforts into a bilingual English and Spanish campaign that shows children “lamenting their problems” over a glass of milk while discussing how dairy gives them the strength and energy needed to power through life. The organization hired Gallegos United, an advertising agency that focuses on Hispanic markets, to develop the new package. According to CMPB director Steve James, the organization is aiming to curtail declining sales by “focusing on diversity” and millennial families who are “setting cultural trends.”

“Twenty-five years ago, when ‘Got Milk?’ launched, our only competition in the refrigerator case was orange juice and carbonated beverages. But the universe of choice has really exploded over those years,” James added. He believes that the revitalized, family-targeting campaign will give dairy a competitive edge over plant-based milk brands. Additionally, the CMPB aims to reach new customers with a newly designed website and ads designed for social media.

“Historically, dairy foods, and milk more than any, were perceived almost reverentially as nature’s perfect food,” said Andrew M. Novaković, the E.V. Baker Professor of Agricultural Economics at Cornell University. “Providing milk was almost seen as doing god’s work, and people in that industry saw themselves as important gatekeepers to feeding your children.”

The dairy industry has plenty of reasons to feel threatened. According to recent data from global market research firm Mintel, US sales of vegan milk grew by 61 percent between 2012 and 2017 while many surveyed stated that they are drinking less dairy milk out of health concerns. While milk was once seen as one of nature’s perfect foods and the key to healthy teeth and strong bones, research has shown that dairy’s health benefits have been overstated.

While James believes that the “Got Milk?” campaign has solidified cow’s milk as an irreplaceable, ubiquitous part of American culture, consumption of cow’s milk has been on a steady decline since the mid-1970s but in recent years, the sudden, increased availability of new nondairy milks has damaged the dairy industry, forcing leading companies such as Dean Foods to shut down facilities.

Some emerging plant-based milk companies, such as Mooala, have realized that the millennial family market may be a lucrative demographic to target. According to data from the brand, working families with two children happen to be their largest market. The brand has successfully leveraged this by demoing its product by demoing it in cereals and granola. While cow’s milk has not yet plummeted past the point of return, over half of US consumers now regularly purchase plant-based milk.