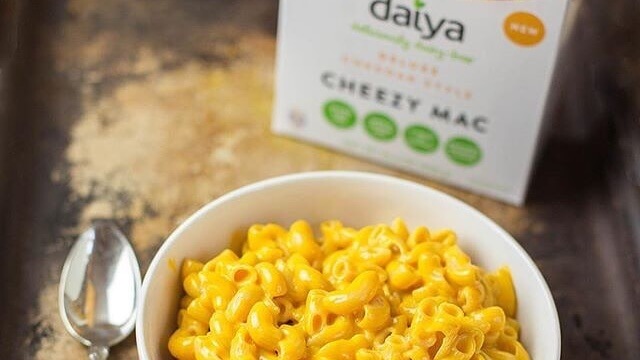 The supermarket chain, which is one of the biggest in the UK, already stocks the brands’ Medium Cheddar Style Block, as well as its Chocolate Cheezecake.

Founded in 2008, Daiya’s wide range of products are available across Canada and the U.S. Earlier this year, the brand made the leap across the pond, first launching a selection of its products with the online plant-based supermarket The Vegan Kind. The online marketplace stocks a wide range of Daiya’s dairy-free items, including its Cheeze Shreds, Cheeze Slices, Cream Cheeze, and like Sainsbury’s, the Cheezy Mac.

“We recognize that consumers in the UK are making conscious choices to embrace both a healthier planet and healthier lifestyle,” said Daiya CEO Terry Tierney at the time of the initial UK launch. “Our fans across the UK have been petitioning for Daiya products for years. This momentous launch demonstrates we are another step closer in our continued journey in bringing the incredible benefits of plant-forward living to more people worldwide.”

For when you just can’t choose, here’s a cheezy mac pizza that combines all the #dairyfree deliciousness into one bite. Would you give this a try? Thanks to @avocadosandales for the ? #plantbased #comfortfood

Daiya is on a mission to bring its products to as many people as possible. In March, the brand revealed it was moving to a new, larger production facility in East Vancouver, putting it on track to hit $1 billion in sales.

In the spirit of encouraging as many people as possible to try and embrace dairy-free foods, in the U.S., the brand recently launched a $1 million instore campaign titled “The Comfort Food That Loves You Back.” The aim of the campaign, which involves talking Cheezy Mac boxes, is to show consumers that vegan comfort food can be just as tasty as the “real thing.”

The boxes flatter customers as they walk past the Cheezy Mac display in the supermarket with phrases like “You’re an incredible person,” and “You look amazing today.”

“[T]his campaign is centered around the idea that people already love comfort food and that there’s finally a food that loves you as much as you love it,” said Jonathan Schoenberg, the executive creative director at TDA Bouler, the advertising agency responsible for the campaign’s creation.