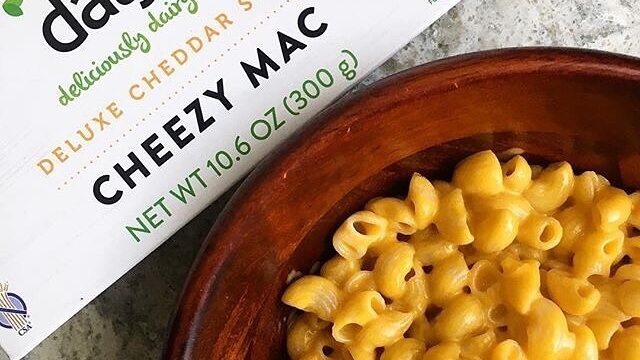 Vegan cheese brand Daiya’s Cheezy Mac is loved by many consumers across the U.S., and now, thanks to the brand’s new campaign, this dairy-free mac and cheese can also express its love back.

In a new $1 million campaign titled “The Comfort Food That Loves You Back,” Daiya has developed Cheezy Mac boxes that will talk to customers, which can be seen in in-store promotions, digital ads, and be won in social media contests.

According to Vancouver-based Daiya, the new campaign is aimed at everyone, not just vegans, in order to encourage people to realize that plant-based comfort foods can be just as tasty as the “real thing.” The box flatters in-store customers with phrases such as “You look amazing today” and “You’re an incredible person.” Some of its sayings are more suggestive. For example, on some occasions, it declares to its new owner, “We were made for each other.”

Waiting to try our new Cheezy Mac flavors? Well wait no longer, because they’re 15% off on Amazon! Check out our Instagram stories for the deal

Developed by the independent advertising and design agency TDA Boulder, the new smooth-talking campaign will be present in around 70 supermarkets throughout the U.S. Facebook users will also have the chance to win a box, with 500 up for grabs to those who post about why they are in need of a little comfort food.

“[T]his campaign is centered around the idea that people already love comfort food and that there’s finally a food that loves you as much as you love it,” said TDA Boulder’s executive creative director, Jonathan Schoenberg, in a statement.

Ads for the new vegan mac and cheese box have been placed in various media outlets that might not typically be frequented by vegan consumers in a bid to reach a broader, plant-curious audience. Banners are being displayed on food-focused sites like the Kitchn, as well as ads on health and wellness sites, catering to the rising demand for vegan dairy products.

Additionally, the company is using geo-targeted mobile ads for those near a Daiya retailer and full-page print ads are rolling out in mainstream magazines such as “People” and “Every Day with Rachel Ray.”