The fresh guacamole is also a new addition to Del Taco’s menu.

“This Fourth of July weekend, plant-based fans will be able to celebrate with one of the largest menus of plant-based items in the fast-food category thanks to the new Beyond Meat Epic Burritos we have added to the Del Taco menu,” Tim Hackbardt, Del Taco’s Chief Marketing Officer, said in a statement.

“As an added bonus, working with Beyond Meat and Doordash, we’re able to make it easy by offering free delivery with any Beyond Meat Epic Burrito order through Doordash [this Fourth of July weekend],” he added. 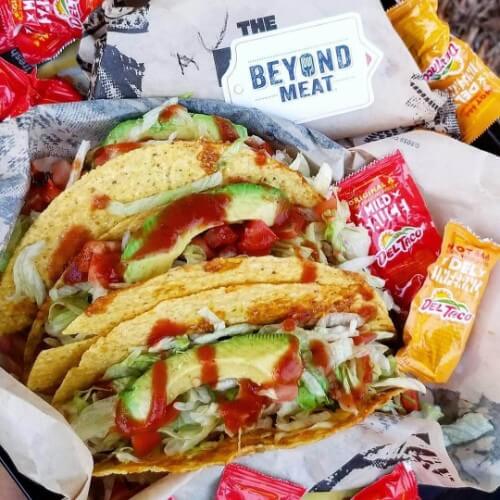 The meatless meat crumbles are made from pea protein and resemble the taste and texture of animal-derived beef. The chain added the vegan meat in several of its taco options. The beeflike crumbles can also be substituted into any other menu item.

Following the launch, Peter Saleh, an analyst at global financial services firm BTIG, said in a statement: “So far, the Beyond Meat Tacos are performing above the levels of the Del Taco, one of the most successful product launches in the company’s history.”

Del Taco isn’t the first fast-food restaurant to get Beyond Meat’s products. Taco Bell, KFC, and Pizza Hut recently had partnered with the company to launch its plant-based meats in China.

Starbucks launched plant-based breakfast sandwiches made with vegan Beyond Meat patties in Canada earlier this year, too. Dunkin’ Donuts also rolled out a Beyond sausage breakfast sandwich nationwide last fall. Carl’s Jr. and Hardee’s also feature Beyond Burgers on their menus.