Bakery specialist Delice de France has launched a vegan steak and ale pie that will be available in convenience stores across the UK.

The meat-free pie, called the Vegan Fake & Ale, features steak-style strips and baby onions in an ale sauce. A second pie, the Vegan Saag Mangalore, is filled with cauliflower, spinach, and chickpeas in a spicy sauce.

Delice de France sales operations director Jenny Bayliss told the Grocer that there has “never been a better time to review bakery offerings to tap into growing consumer trends.”

Bayliss added, “The growth of those interested in vegan or meat reduction diets looks set to continue, and with it, there’s an increased expectation to see more vegan options widely available across all categories.”

The global foodservice supplier has worked to offer more vegan options. Last year, its vegan sausage roll won the Gold Star at the 2019 Great Taste Awards, per British Baker. Seventy-five percent of the company’s bread range is vegan; its egg-free brioche bun is one of the top sellers. 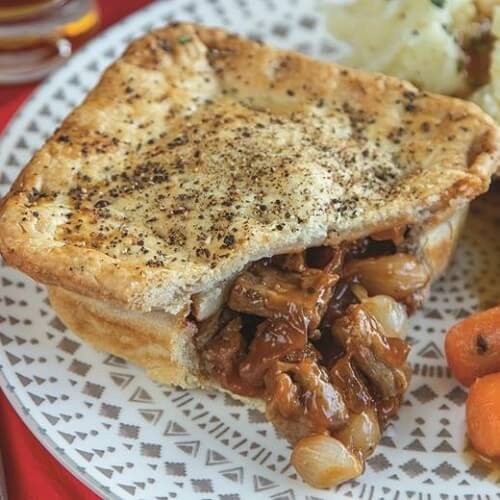 Traditionally made with dairy and eggs, specialists are now working to capitalize on the rising demand for vegan food. Bakery chain Greggs made an impact last January with its vegan sausage roll. One month later, CEO Roger Whiteside credited the sausage roll for helping Greggs start the year in “great form.”

“We’re not giving out numbers – it’s in the hundreds of thousands – but it is the fastest selling new product we have launched in six years. It’s literally flying off the shelves,” Whiteside told ITV. For some time, the vegan sausage roll was sold out at certain locations.

The company aimed vegan pastries for some time: “Like many food retailers we have seen increasing demand for vegetarian and vegan products. We have been trying to develop a vegan version of our famous sausage roll for some time now.”