Disney has teamed up with vegan Impossible Foods in a (mostly) plant-based partnership to debut the No Meatball Sub, according to Foodbeast.

While the sub sandwich may appear simple on the outside, the Impossible Foods’ “bleeding” vegan burger meat is used to make the juicy meatballs, Disney told the publication. Coated with marinara sauce and topped with dairy-based mozzarella, the new meatless sandwich is not suitable for vegans to chow down on just yet. In addition to dairy cheese, Disney combines Impossible Foods’ vegan meat with eggs to flavor the meatballs. According to Disney, this helps the meatballs hold a firmer shape.

This is not the first time Impossible Foods’ meat has been turned from a beef-style patty into meatballs. In September last year, Clover Food Labs in Harvard Square became the first ever vendor to serve a meat-free ‘meatball’ sandwich, made from chunks of the Impossible Burger patties. The success and popularity of the Impossible Burger is all down to its quality, claims CEO of the brand, Patrick O. Brown. “Our [meat alternative] is getting better every day while the cow’s [beef meat] is not,” Brown has stated in the past. 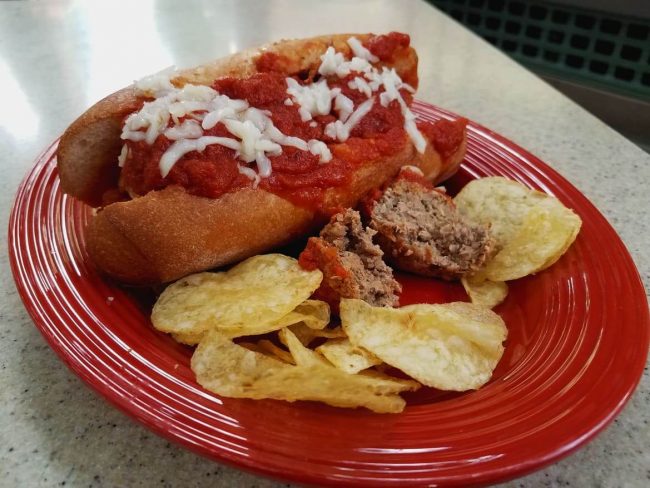 Disney’s step in offering a meat-free option to help tide theme park-goers over during entertainment is a hopeful one. Perhaps, vegan options may soon be on the cards for the huge franchise. Consumers are steadily moving towards a more plant-based diet, with the number of vegans in the United States increased by 600% in the last three years.

The new subs can be found at Paradise Garden Grill at Disney’s California Adventure. However, for those keen to sample Disney’s take on the Impossible Meatball, the No Meatball Sub can also be purchased for tasting during California Adventure’s Food & Wine Festival, which runs until April 12th. For a price of $10.99, this sub sandwich comes served with a side of kettle-cooked potato chips.