Disneyland Paris’s second annual Rendez-Vous Gourmand festival kicks off this weekend with a fully vegan menu available for Disney attendees seeking plant-based comforts in the wonderland of decadent treats in the city known for its love of animal-heavy food.

The Vegan Kitchen menu, which is available at select locations throughout the park, is not region specific but rather a mash-up of cuisines, featuring a Mediterranean falafel and a vegetable tart, an Asian-inspired Buddha bowl of fresh veggies, Indian pink lentil dal, and for dessert, an apple crumb or fresh melon. The theme park’s Spanish menu also features a chilled tomato-based gazpacho soup and potato tacos. 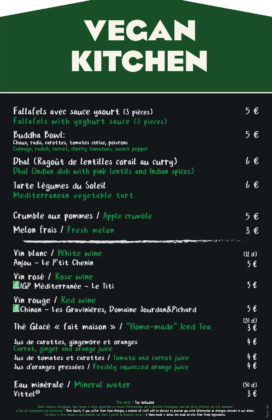 This is not Disney’s first foray into vegan cuisine. The Paris location serves a vegetable lasagna that can be made without cheese, and salads, as well as vegan sorbet and waffle cones. And Disney locations around the globe offer a number of vegan items or items that can be made vegan on special request. In Japan there’s edamame, vegan sushi, and rice; Canada’s World Showcase features vegan Mickey pasta with marinara, salad; the Beyond Burger is available, and diners have the option to replace a chicken patty with a Gardein vegan chicken patty instead.

Stateside Disneygoers can find pretzels, pasta, vegan pho, salads, fries and even waffles can be made vegan. Disney World Orlando also hosts Erin McKenna’s vegan and gluten-free bakery–a number of those items can even be delivered to Disney area hotels. And there are dozens more vegan options at all of Disney’s locations.

Disney’s most iconic treat, the pineapple Dole Whip is also vegan. The popular frozen dessert has a cult-like following, but if the theme park lines don’t bother you, it’s a delightfully dairy-free way to celebrate the magic of Disney.