Called “Star Wars: Galaxy’s Edge,” the upcoming area will include enclosed passageways that expand and compress to portray fades from the films. To maintain the atmosphere, the park’s rides contain no obvious markings, and the Millennium Falcon — the franchise’s famous starship — is also subtly marked.

According to GeekTyrant, guests can enter the starship and become immersed in different stories for each flight. It will also help to guide park-goers to different areas of “Star Wars: Galaxy’s Edge,” like to Oga’s Cantina, which stocks plant-based treats.

Featuring music and a cast of quirky characters, Oga’s Cantina will serve a variety of creative beverages including dairy-free, vegan Blue Milk, just like the kind Luke Skywalker drank, according to Attractions Magazine. Frozen plant-based blends of rice and coconut milks will act as Green Milk and Blue Milk.

“Oga’s Cantina [is] relatively small for aesthetic reasons and is likely to be popular… An intricate tangle of tubes and vessels behind the bar might make some drinks appear to flow from the ceiling,” GeekTyrant reports. 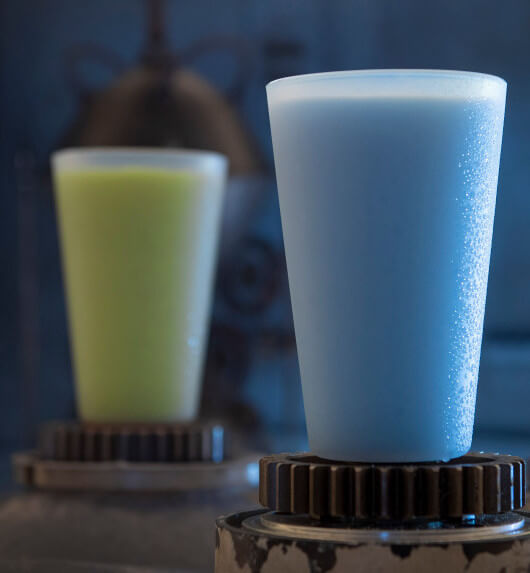 ABC15 shared a list of the theme park attraction’s menu, revealing that it will feature several vegan dishes. At Docking Bay 7 Food and Cargo, diners will be able to enjoy the Felucian Garden Spread, a plant-based kefta with herb hummus, tomato-cucumber relish, and pita. An Ithorian Garden Loaf is also on the menu, a plant-based meatloaf served with roasted vegetable mash, seasonal vegetables, and mushroom sauce.

Young Jedis don’t have to miss out on the vegan eats; the kids’ menu includes A Taste of Takodana, a black bean hummus served with edible soil and nuts, chilled dipping vegetables, and multi-grain crisps.

It’s not the first time veganism has found a place within the “Star Wars” franchise. Fans theorized that popular character Chewbacca experienced a vegan epiphany in the 2017 film “The Last Jedi,” after he made the connection that his food was a living being.

Daisy Ridley, the actor behind “Star Wars” hero Rey, is a vegan, and Mark Hamill, known for his portrayal of Skywalker, has spoken out about animal welfare and the importance of conservation. Backing environmentalist and primatologist Jane Goodall, Hamill drew attention to the drastic decline in chimpanzee populations and urged his fans to help save chimps from extinction.

Prior to the premiere screening of “Solo: A Star Wars Story,” an onscreen message of compassion was delivered to theater-goers by vegan rapper RZA. “We are all the same in all the ways that matter. It doesn’t matter what we look like, how old we are, what language we speak, or who we love,” RZA said. “It doesn’t matter if we have fur, or feathers, or fins, we’re not different in any important way.”

“Star Wars: Galaxy’s Edge” will open this summer at Disneyland Park in the Disneyland Resort in Anaheim, California, and this fall at Hollywood Studios in Walt Disney World Resort in Orlando, Florida.