People are using banana blossom to make vegan fish and chips and you can buy cans of it at Asda.

What Is Banana Blossom?

Banana blossom — also called banana heart — is a purple-skinned flower that grows at the end of a banana fruit cluster. Its center is cream-colored and soft, with a slight crunch, and it tastes vaguely like artichoke. Banana blossom can be eaten raw or cooked.

The ingredient is used in Asian cuisines like Indian, Laotian, and Thai but now, thanks to its chunky, flaky texture, it’s becoming a popular ingredient in vegan fish. 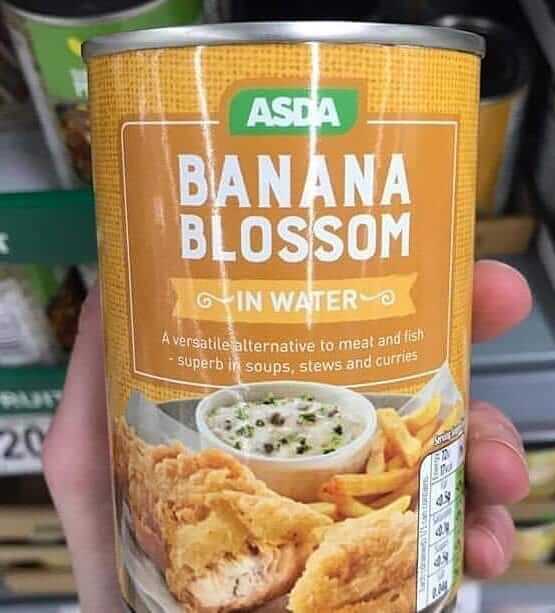 Until recently, banana blossom has only appeared in smaller independent grocers. Now, Asda — the UK’s second biggest supermarket chain — has begun selling cans of the food item. The can even includes an image of meat-free fish and chips on its label as well as the description, “A versatile alternative to meat and fish — superb in soups, stews, and curries.”

Alexa Masterson-Jones — the trends and innovation manager at Sainsbury’s — told The Guardian that she stumbled upon banana blossom at a restaurant in London. She thought they’d mistakenly served her lamb “because it tasted so meaty.”

Masterson-Jones said to The Guardian, “We’ve been soaking [banana blossom] in kombu and wrapping it in nori, to put that fishy flavour through it, and created a battered cod-esque fillet.” She added, “We’ve been stir-frying it, putting it in dumplings and croquettes, and we’ve found that if you dice it up really small, it has a nice mince texture as well.”

Last year, London-based seafood restaurant Sutton and Sons closed its Hackney location, re-opening as an all-vegan venue. The new restaurant makes its plant-based fish by marinating banana blossom with seaweed to give it a fish flavor and frying it to a golden crisp. It also makes banana blossom and potato fish cakes, vegan prawn cocktails, scampi and chips, and banana blossom fish burgers.