For those keeping up with DJ Khaled’s Instagram stories, you may be aware the star has been making some positive changes to his diet and lifestyle. Through the WeightWatchers program, Khaled has been incorporating many more vegan meals into his diet, which he is more than happy to show off to his nine million followers on his Instagram story.

Next came vegan chili with cashew yogurt and cornbread with coconut oil, the record star was so excited, he said “vegan chili” three times in the video. 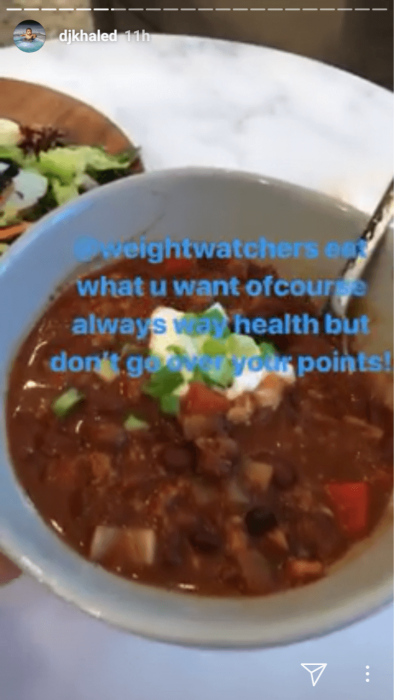 The Weight Watchers program works on a point system, each meal or snack is worth a certain amount of points. The intention is that people have a “Point Budget” and they can “spend” points on whatever their preferred meals are, provided they do not exceed maximum points. The program isn’t vegan, and some consider many of their recipes to be behind the times, as confirmed carcinogenic processed meats are included, are are high-cholesterol sources; animal products.

While it is possible to follow a Weight Watchers program as a vegan, this isn’t common practice.

DJ Khaled himself has not said he is vegan, and a recent post showed him eating salmon, but his inclusion of more vegan meals into his diet is a step in the right direction.

Ditching salmon (fish have feelings too) in favor of plant-based alternatives is easy these days, one example of an easy swap is smoked tofu – DJ Khaled, we’d love to see you give it a go.