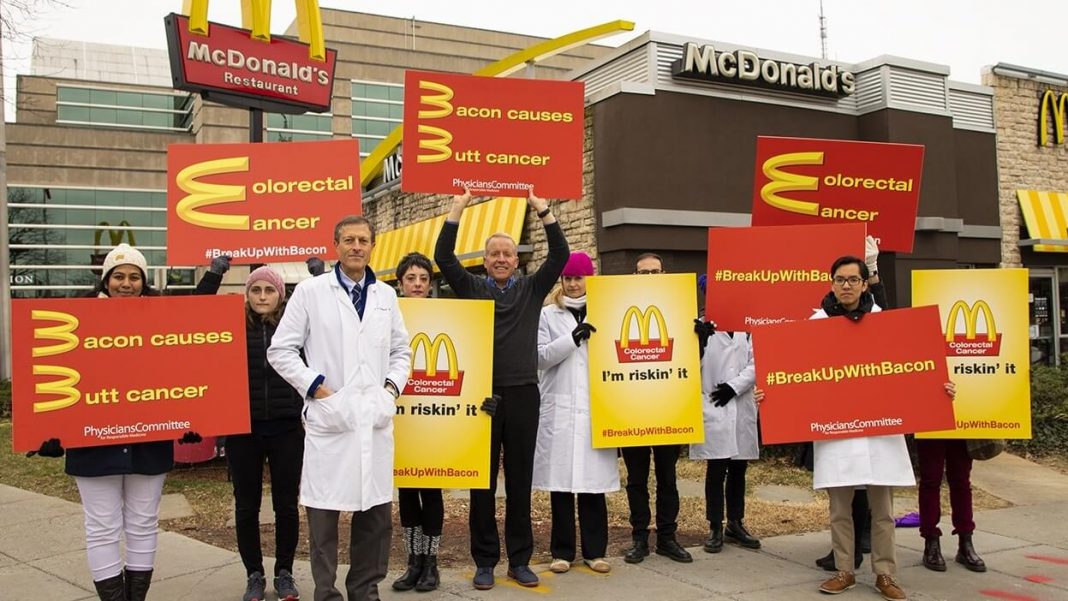 Doctors from the Physicians Committee for Responsible Medicine (PCRM), an organization made up of more than 12,000 medical professionals, protested against McDonald’s Bacon Hour. During the promotion, customers received free bacon with any order.

“Your colon won’t be lovin’ McDonald’s Bacon Hour,” said PCRM president and founder Neal Barnard, M.D. “McDonald’s should be offering customers a free colorectal cancer screening with every free side of cancer-causing bacon.”

Does Bacon Cause Cancer?

Bacon and other processed meats like cold cuts have been shown to raise one’s risk of various forms of cancer, including colorectal. In October 2015, the World Health Organization (WHO) classified it as “carcinogenic to humans” after reviewing more than 800 diet-related studies. The WHO concluded that a few slices of bacon eaten daily could increase one’s colorectal cancer risk by 18 percent.

@mcdonalds is dishing out free bacon—and an increased risk for cancer, diabetes, and heart disease—to customers today during #BaconHour. Learn more about the dangers of processed meat in Dr. Barnard's blog: PCRM.org/Blog.

A post shared by Physicians Committee (@physicianscommittee) on Jan 29, 2019 at 6:46am PST

Research released by the World Cancer Research Fund (WCRF) last June added to this, stating that even small amounts of processed meat can raise one’s risk: “It is not necessary to consume red meat in order to maintain adequate nutritional status… eating meat is not an essential part of a healthy diet. The evidence on processed meat is even more clear-cut. The data show that no level of intake can confidently be associated with a lack of risk.”

The WCRF recommended eating very little, if any, processed meat.

Why Mcdonald’s Should Serve Vegan Food

“Instead of Bacon Hour, consider a nationwide launch of your vegan McAloo Tikki burger, which was recently featured at your Chicago headquarters. Its potatoes, peas, red onions, and tomato slices, which are high in fiber and other protective nutrients, work to reduce colorectal cancer risk,” he said.

McDonald’s does offer some vegan options, albeit outside of the US. The chain’s UK locations added vegan Happy Meals and vegetarian wraps featuring split pea-based goujins earlier this month. McDonald’s Sweden added falafel to the menu, following the success of the McVegan sandwich, which launched in Finland and Sweden in 2017.