Customers will now be able to order vegan versions of two popular Domino’s vegetarian pizzas at 46 stores throughout the UK and Ireland. The Vegan Margherita is made using Domino’s own vegan cheese alternative and signature vine-ripened tomato sauce. The Vegan Vegi Supreme also includes vegan cheese and is topped with fresh vegetables including mushrooms, sweetcorn, onions, and peppers.

Customers can also customize pizzas with any opping of their choice—entirely fresh fruit and vegetables, for the time being. Domino’s BBQ Dip is also vegan.

“Our vegan offering has been a while coming because we’re determined to make sure it’s full of our iconic Domino’s flavour. We might not be first but we’re always the best – no compromises,” said Aman Prasher, Domino’s chief vegan dough developer.

“Our dedicated pizza chefs are incredibly excited for our fans to try this new and improved latest dough as we believe we’ve nailed it. If they agree, and love it as much as we do, Domino’s will roll out nationwide,” continued Prasher. “We’ve now busy working on some toppings and sides -so watch this space!”

Earlier this year, Domino’s began trialing a vegan beef topping in the U.S. Domino’s CEO Richard Allison told Yahoo Finance that he is interested in bringing plant-based toppings to U.S. branches. “We are testing those things today,” he explained at the time.

Allison, who tasted some of the potential vegan toppings, said that “the industry is doing a pretty good job.” He added: “Particularly around things that come in the form of crumbles.” He said that vegan meat toppings may come to U.S. stores in the form of “sausage or beef.”

There are already vegan cheese options at Domino’s Australia and New Zealand.

Domino’s first trialed vegan cheese by American dairy-free brand Follow Your Heart in select Australian stores at the beginning of 2018. The trial was so successful it expanded the menu items to the permanent menu. A similar launch in New Zealand expanded its vegan offerings to more than 100 locations.

Domino’s has also added vegan cheese options in the Netherlands. The country, like much of Europe, has been quick to embrace vegan food options. 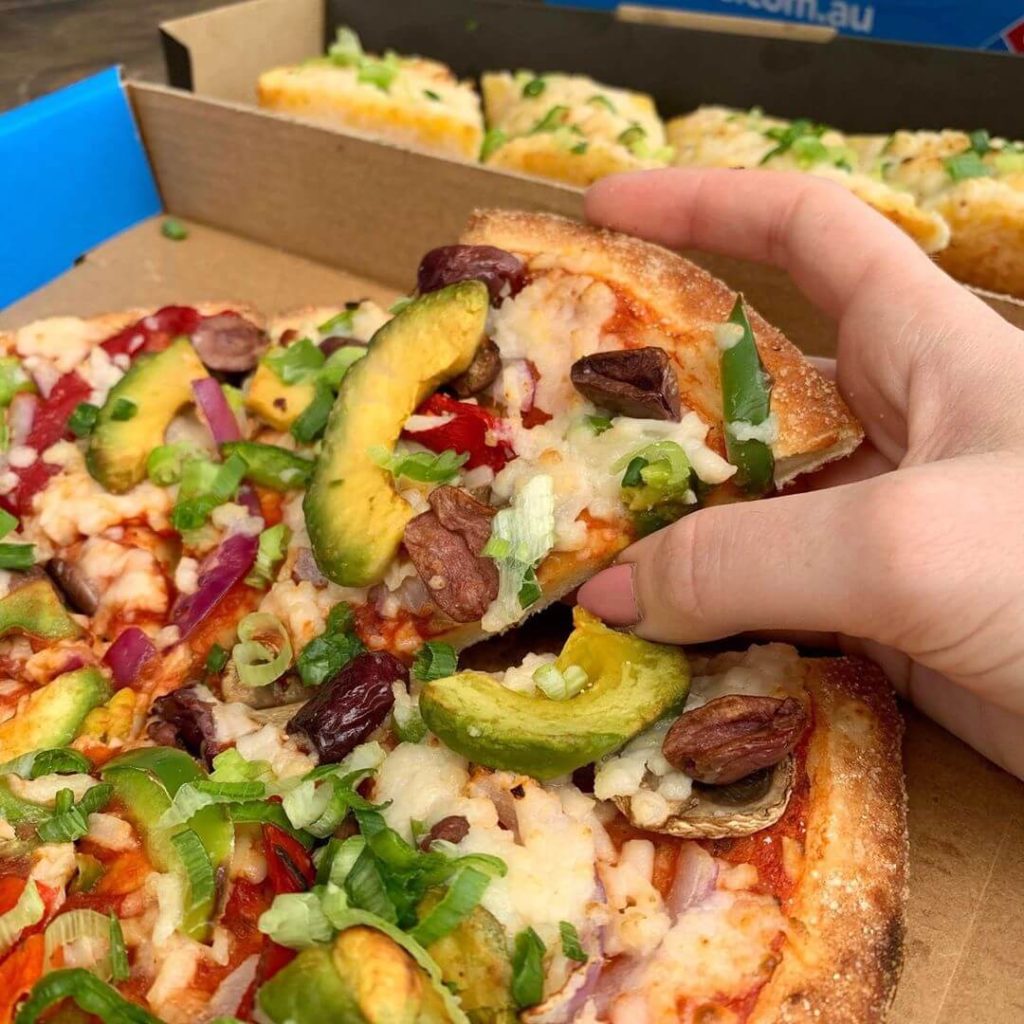 Vegan Pizza Around the World

Zizzi, PizzaExpress, and Frankie & Benny’s are other UK pizza chains that now offer vegan options. The completely vegan frozen UK pizza brand One Planet Pizza is also finding success: it received a £25,000 investment to expand across Europe in August 2018.

The vegan diet is increasingly popular across the UK. Supermarkets — including Tesco, Sainsbury’s, and Waitrose– have expanded their vegan offerings significantly.

A growing number of restaurants are updating their menus to meet the nation’s growing demand for plant-based and vegan options. According to a survey by Sainsbury’s, 91 percent of Brits now identify as flexitarian.

Domino’s CEO Don Meij told CNBC that 93 percent of customers who choose the vegan option are meat-eaters. Those customers seek a “high-protein menu” with the “benefits that come from vegetables.”