Domino’s Pizza is testing out a vegan beef topping in the U.S.

Speaking to Yahoo Finance, Domino’s CEO Richard Allison said that he is interested in bringing plant-based toppings to U.S. stores. “We are testing those things today,” he said. 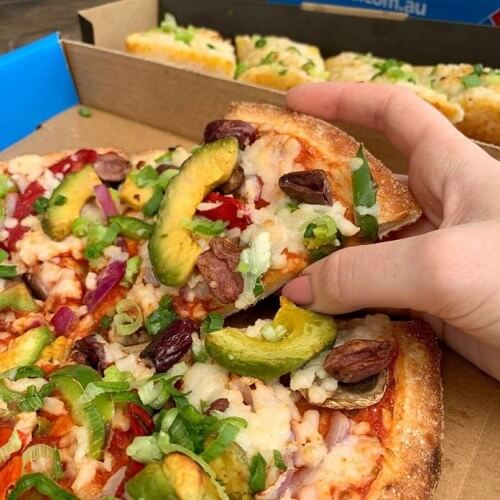 Domino’s Australia already has vegan beef on the menu. | Domino’s

The Need to Innovate

Domino’s has missed same-sales estimates for both the U.S. and international markets for the past four quarters. While Allison blames third-party delivery services like GrubHub and DoorDash, Yahoo Finance reporter Heidi Chung explained that Domino’s lack of willingness to try new things may also be part of the problem.

“The innovation is slow, they’re not quick to pump out new menu products that are going to bring customers to their doors,” she said. Chung noted that analysts have pointed out that Domino’s may lose market share if it fails to innovate.

Australian Domino’s are ahead of the game. The chain added three vegan cheese pizzas to the menu in 2018 following successful trials. Last January, it added a fourth option. Due to the success of its vegan options, Australian locations introduced three plant-based meat toppings last October: pepperoni, beef, and ham. Half of the Australian stores sold out of the vegan beef topping on the launch date, according to the chain.

CEO Don Meij told CNBC that 93 percent of customers who choose the vegan option are meat-eaters. Those customers seek a “high-protein menu” with the “benefits that come from vegetables.”

Domino’s U.S. has not announced when and if its plant-based beef topping will launch. According to Allison, if the toppings “prove to have consumer appeal” and if there is a stable supplier then we “may see some of them on the Domino’s menu.”