Doublespeak is one of animal agriculture’s allies when it comes to convincing consumers that there is a humane way to exploit animal bodies for food. The term, inspired by author George Orwell’s dystopian 1949 novel “Nineteen Eighty-Four,” means to use language to deliberately obscure the truth.

Big Brother—the novel’s totalitarian government entity—constructs language using doublethink and Newspeak to limit free thought. For example, there is no word for “bad” because the negative language has been removed. But, there is “ungood.” There is also no word for “science.”

Napoleon, the main pig in power in another of Orwell’s books 1945’s novella “Animal Farm,” uses doublespeak to manipulate the other animals. When there’s a food shortage, the pigs in power “readjust” rations—what they really mean is they are reducing the amount of food the lower class pigs receive.

This next example is something that many of us are familiar with; “put to sleep” and “euthanize,” the latter comes from the Greek word for “good death.” Removing the word “death” helps make an emotional moment like euthanasia more bearable.

But how does the food system use doublespeak? 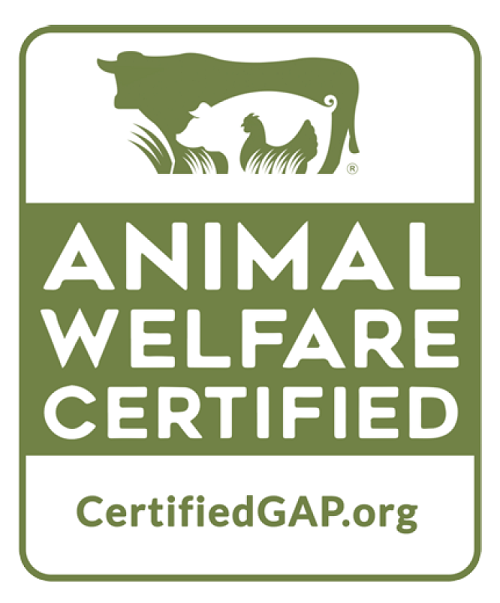 “Animal Welfare Certified” meat is still the product of slaughter.

Doublespeak In the Meat Industry

One of the biggest examples of doublespeak comes from the USDA itself. The Humane Slaughter Act, approved in 1958, allows the USDA to regulate its Food Safety and Inspection Services. Despite the name, the methods of slaughter described are anything but humane. According to the law, animals must be “rendered insensible to pain” before they are killed. Methods include a blunt blow to the head, a gunshot, or by electrical or chemical means.

Orwell wrote in his 1946 essay “In Front of Your Nose” that everyone is “capable of believing things which we know to be untrue, and then, when we are finally proved wrong, impudently twisting the facts so as to show that we were right.”

In the Humane Slaughter Act’s case, it implies that the method by which animals are killed is humane. But, documents detailing the acceptable ways to slaughter an animal are in opposition with the word “humane.”

The National Pork Board–a group sponsored by the USDA’s marketing department—describes its methods legal under the Humane Slaughter Act, in detail. Male piglets are castrated with a scalpel and blade.

All piglets have their tails cut off with an electric tail docker. Neither method requires anesthesia. Pigs can be “euthanized” via being rendered unconscious. They can then be killed using carbon dioxide, gunshot, or captive bolts. Piglets can be killed via electrocution of blunt force trauma.

In September 2018, the administration introduced new regulations that would allow slaughterhouses employees to oversee inspections without being obligated to undergo training. The new regulations would also increase line speeds in order to speed up production. Doing so could not only lead to more safety issues, but also worse treatment for pigs.

A number of meat brands market their meat as “humane.” Whole Foods Market, for example, has built a picturesque narrative around where its meat comes from. The supermarket stores and website shows animals living in grassy fields as part of its 5-Step Animal Welfare Certification program, which it says “encourages and rewards farmers and ranchers to improve their welfare practices.” Its meat is also “Certified Humane” under Global Animal Protection, a nonprofit that seeks to improve farm animal welfare globally. 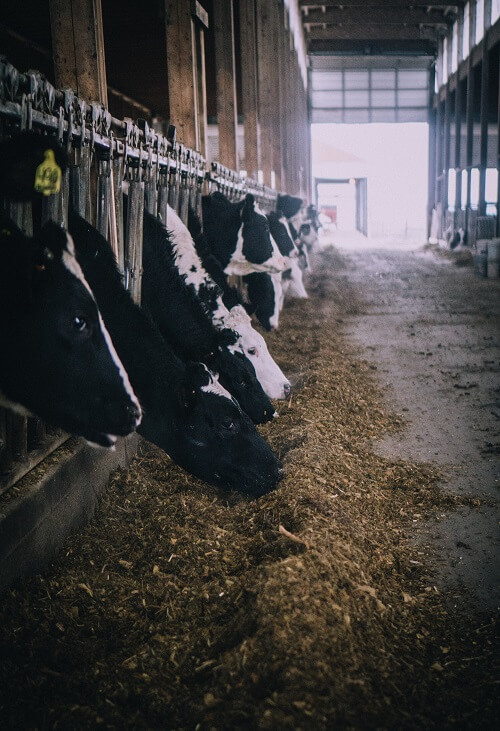 Are “happy cows” a myth?

Many dairy brands have tried to set themselves apart as being different from traditional factory-farmed milk.

Fairlife—a brand of ultrafiltered milk distributed by the Coca-Cola Company—uses doublespeak to portray itself as a kinder dairy brand. The brand says that it can help make the world better through the “wholesome simplicity of real cow’s milk.” Its name, Fairlife, implies that it treats its cows well and it works in tandem with its logo of a cow with dainty eyelashes.

Multiple lawsuits say the brand’s claims that it treats animals humanely are deceptive to consumers. Fairlife claims that individual employees are to blame for the acts. Many retailers pulled Fairlife from the dairy aisle following the release of the undercover footage.

Tillamook, an Oregon-based dairy brand, uses doublespeak to fool consumers into believing they’re counteracting factory-farmed dairy. Last August, a complaint filed against the dairy co-op took issue with an ad stating that the company is “taking on the flawed industrialized food system.” 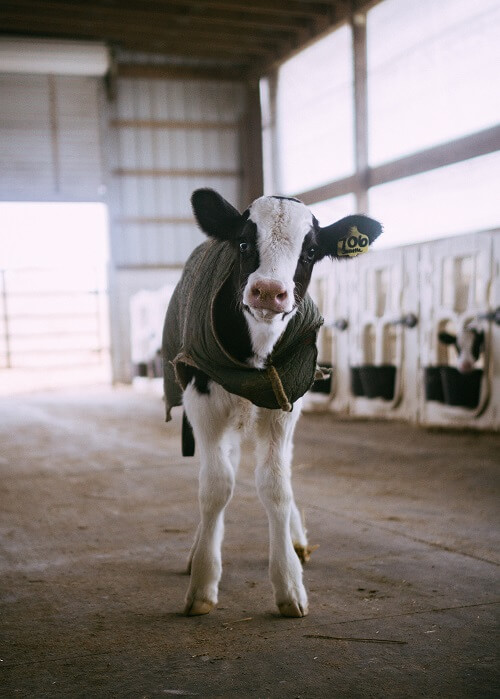 According to the plaintiff, the Unilever-owned brand misleads consumers into believing its dairy comes from “happy cows.” The company makes it seem like all of its milk is from its “Caring Dairy” program, which is said to source milk from small Vermont farms labeled “humane.”

However, only a fraction of the milk comes from Caring Dairy. The rest, the lawsuit claims, is from factory farms. Earlier this month, Ben & Jerry’s announced that it was removing the “happy cow” claim from its packaging. This followed the brand filing a motion to dismiss on January 13. Ben & Jerry’s argued that it never claimed its dairy ingredients were sourced exclusively from “happy cows.”

According to the website, their cows spend their time “grazing, feeding, mooing, and chewing” to make milk for humans, using playful language to obscure the truth of the dairy industry.

The dairy industry is often viewed as kinder than the meat industry. However, the two work hand-in-hand.

Male calves are sold to the veal industry. After three to four years of intensive milk production, their mothers are slaughtered. Cows rescued from the industry can live for up to 20 years. 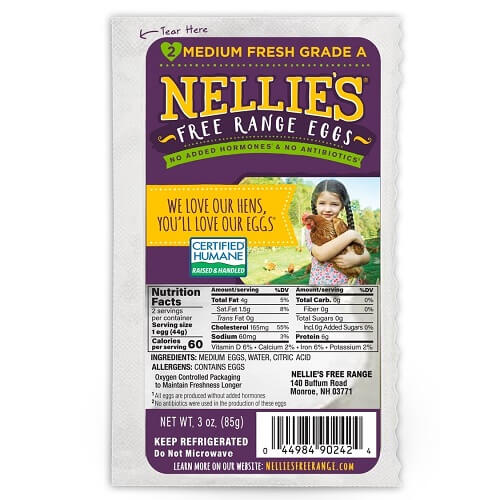 The egg industry has also realized the benefits of using doublespeak.

Awareness of battery cages, where egg-laying hens are given only 67 square inches of space, denying them the space for natural behaviors like dust baths, nesting, and perching, has led to the popularity of eggs from “cage-free” and “free-range” hens. Some brands, like Nellie’s and Whole Foods, use this in their marketing.

Many major retailers, such as Walmart, Kroger, Disney, Campbell’s, Costco, ConAgra, Starbucks, White Castle, and Starbucks have all pledged to go cage-free. Applebee’s, Taco Bell, and Whole Foods, also use cage-free eggs. Brands leverage this to make a product seem more ethical. For example, McDonald’s pledged to go cage-free by 2025 in 2015. In a video announcing the switch, the fast-food giant promised committed to choosing farms that are “better for the birds.” 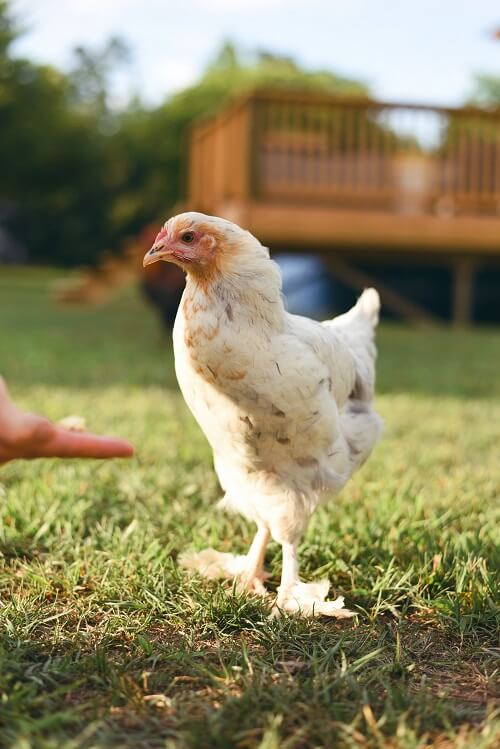 While it is progress for the egg-laying hens, going cage-free doesn’t mean cruelty-free.

Male chicks—considered an unprofitable byproduct of the egg industry—are ground up alive. Several hundred million male chicks are killed each year, according to the animal rights group Mercy for Animals.

California’s Prop 12, the most progressive animal rights bill in the country, mandated cage-free conditions for egg-laying hens. Michigan also recently passed legislation requiring eggs sold to come from cage-free hens. Despite the rise in the popularity of cage-free eggs, around 97 percent of hens are still raised in battery cages. These small cages typically house six birds, who have only an 8×8 inch floor space, per guidelines set by the United Egg Group.

Both battery cage and cage-free hens are purchased from hatcheries that slaughter male chicks in this fashion. And regardless of being in a battery cage or “cage-free,” both hens also have their beaks painfully burned off to prevent pecking, which they do from stress. They are both transported long distances to slaughter with no food or water.

Hens are slaughtered at less than two-years-old. Domestic chickens can live for up to 10 years. 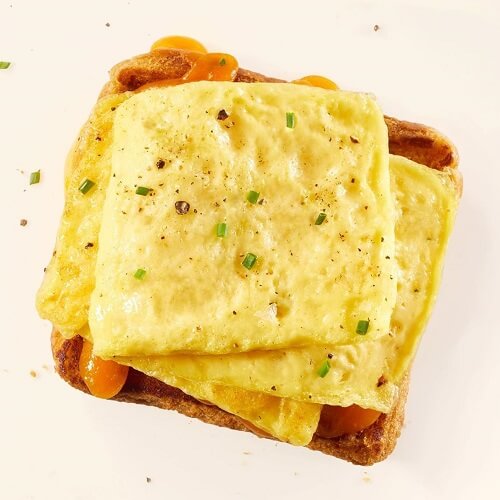 The Threat of Vegan Eggs

Some brands label their eggs as “pasture-raised.” This is supposedly even more ethical because the hens are allowed outside. But life for egg-laying hens ends the same way. Vegan eggs could eliminate the suffering of millions of hens, but the egg industry has not responded kindly to alternatives.

California-based food tech brand JUST first introduced Just Mayo, an egg-free mayonnaise, in 2013. At the time, the company had also begun developing the idea for the JUST Egg, a liquid egg made from mung beans.

Three years later, reports revealed that the American Egg Board—an industry-funded marketing group overseen by the USDA—spent at least $59,500 to counter JUST’s marketing efforts. It hired a top-tier Chicago PR firm to get bloggers to make “USDA-approved” pro-egg posts because it perceived vegan eggs as a threat to the industry. 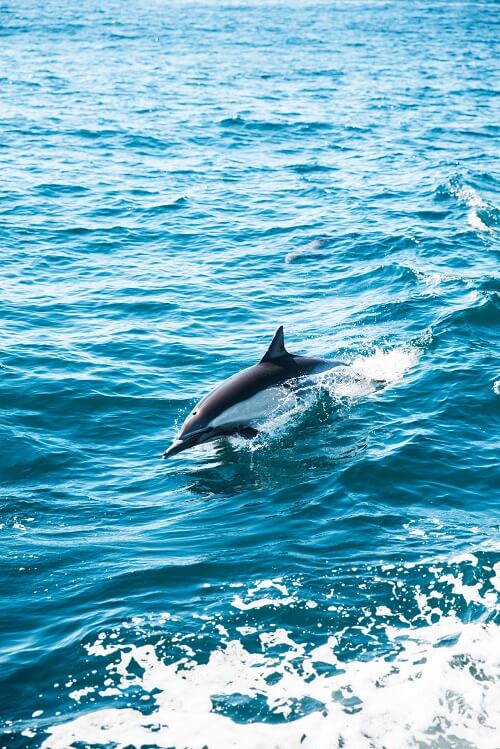 What does “dolphin-safe” really mean?

Doublespeak occurs in the fishing industry, too. Most canned tuna brands have a “dolphin-safe” label.

Ninety-eight percent of canned tuna is labeled “dolphin-safe.” But, the laws only seek to provide cover for a handful of major brands. This makes real “dolphin-safe” tuna nearly impossible to track, according to the World Trade Organization.

“Dolphin-safe” implies that no dolphins were harmed. But, it only means that one particular fishing method was not used in one particular part of the ocean.

According to the National Oceanic and Atmospheric Administration (NOAA), which monitors compliance with “dolphin-safe” labels, regulations require a written statement from the captain of a vessel. It must say that fishing gear was not deployed to encircle dolphins during a tuna fishing trip and that no dolphins were “killed or seriously injured” on a fishing trip.

Even the biggest brands may be guilty of questionable practices. Last May, consumers filed a lawsuit against StarKist, Chicken of the Sea, and Bumble Bee, alleging “wide-ranging and multi-layered” efforts to keep consumers and federal authorities from knowing the extent of their allegedly harmful fishing practices while continuing to use “dolphin-safe” labels on their products.

As of last December, a judge dismissed Bumble Bee’s request to have the suit dismissed. 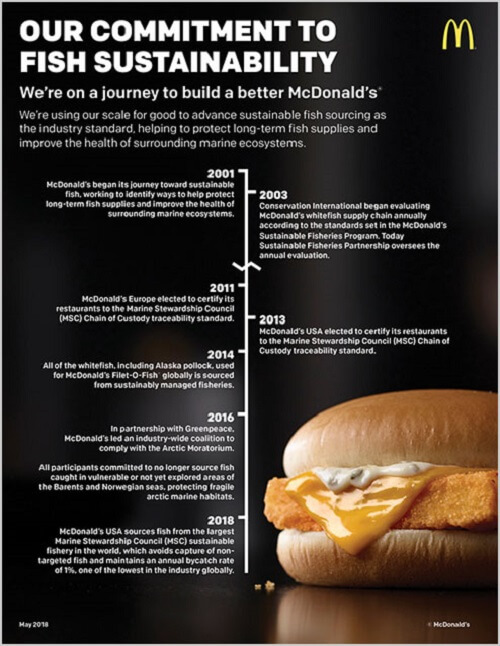 Is the MSC logo a sign of true sustainability?

Sustainable seafood labels have come under fire, too. The Marine Stewardship Council (MSC), an international nonprofit, says that it awards fisheries its “certified sustainable” label if they meet certain standards for fishing practices and traceability. Whole Foods Market, Walmart, and McDonald’s have committed to using only MSC-certified fish. Target, Kroger, and Costco also sell fish with the MSC label.

But there’s a problem with the way the label is obtained. According to The Guardian, a “certified sustainable” rating can be too generic because it covers a wide region. Some vessels in a region may use more ocean-friendly fishing methods. However, others might use trawling, which is notorious for also capturing marine life other than the target species. The industry term for this is “bycatch.”

The MSC system has even certified some fisheries despite evidence that the target fish populations are in trouble. Or, that overfishing is having a negative effect on the environment. But consumers might see the MSC label and believe that they are buying environmentally-friendly fish.

It might feel like animal agriculture industries actively work to keep consumers from knowing the truth behind how products are made. According to the Animal Legal Defense Fund (ALDF), the unfortunate reality is that farmed animals receive only minimal protections under our legal system.

According to the ALDF, “ag-gag” laws aim to stifle whistleblowers and undercover activists for recording footage of farm operations. The ALDF has challenged several states for introducing ag-gag laws, including North Carolina, Arkansas, and Iowa. Federal courts in Idaho and Utah have struck down ag-gag laws as unconstitutional.

“Cage-free” and “Caring Dairy” paint an idealistic portrait of animal culture. But, the fact remains that an estimated nine billion land animals are slaughtered for food annually in the U.S. By using doublespeak to obscure the truth, brands appeal to people’s empathy while still profiting from animal exploitation. Orwell concluded in his 1946 essay, “To see what is in front of one’s nose needs a constant struggle.”