Vegan donuts may soon be coming to Dunkin’.

The international coffee and donut chain’s CEO, David Hoffmann, made the announcement at a recent company shareholder’s meeting.

During the meeting, Rachel Pawelski—senior campaigns coordinator for Animal Outlook (formerly known as Compassion Over Killing)—asked the chain whether or not it would add vegan donuts to its menu.

The CEO responded: “As it relates to a vegan donut, we continue to investigate a viable vegan donut option. We are looking at it closely.”

He continued, “You’re going to continue to see us put more consumer [choices] on the menu.”

Animal Outlook has been campaigning for Dunkin’ to add more vegan options for years. The group launched a petition urging the coffee chain to consider more plant-based menu items. The petition garnered more than 21,000 signatures.

The organization says it’s grateful Dunkin’ is listening to its customers. “If it’s possible to make delicious donuts without using cruelly produced animal products, why not do it? It’s a win-win-win for Dunkin, the animals, and consumers around the country,” Pawelski told LIVEKINDLY. 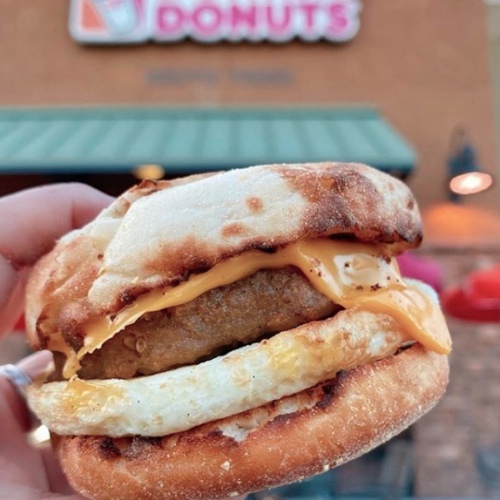 After trialing oat milk at select locations in California, Dunkin’ Donuts announced earlier this year that it would be launching the plant-based milk option nationwide this spring.

Just in time for the iced coffee season, the oat milk—from Planet Oat—can be ordered in hot and iced lattes, coffees, cold brews, and frozen drinks. The oat milk is the first new vegan milk on Dunkin’s menu since the company launched almond milk in 2014.

Last year, the chain added plant-based breakfast sausages by California-based brand Beyond Meat to its menu.

Pawelski says it’s incredibly important for vegan options like Dunkin’s latest menu additions to be made more accessible. “Every day people are changing their diet whether it’s for the animals, their health, or the planet,” she said.

She continued: “By putting a vegan option in front of the average consumer, they’re given one more way to live their values or try something new.“