Dunkin’ Brands may be the next big milestone for vegan meat brand Impossible Foods.

Yahoo Finance reported earlier this month that the fast-food donut and sandwich chain is “in talks” to partner with a major vegan meat brand.

Dunkin’ CEO David Hoffmann declined to comment on who that partner would be, Yahoo reported earlier today, but, the site says, “he suggested the protein could take the form of sausage crumbles atop Dunkin’s new millennial-friendly egg bowls.”

“It’s not surprising that Dunkin’ is about to go this route,” Yahoo reports. “Hoffmann, a restaurant industry veteran, has moved quickly since taking over as CEO in 2018 to modernize the Dunkin’ brand. That has included dropping the word ‘donut’ from the company’s new stores, rolling out affordable espresso beverages and more recently, releasing egg bowls.” 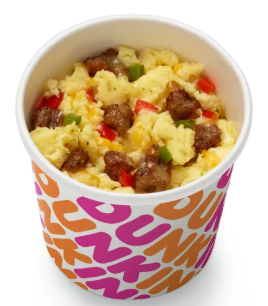 Impossible Foods attracted the attention of multiple mainstream restaurant chains following a $300 million investment backed by celebrities including Jaden Smith, Serena Williams, will.i.am, Jay-Z, and Ruby Rose. Like its competitor Beyond Meat, Impossible Foods may go public in the near future.

“We believe in self-reliance. Being ready to go public is a priority for the company because we need to be operating at the highest level of rigor. But we are not in a rush, nor are we announcing an IPO filing,” chief financial officer David Lee told Reuters earlier this month.

According to media outlet The Information,  Arby’s, Wendy’s, Papa John’s, and Subway are also interested in adding vegan Impossible meat to the menu.

Impossible Foods landed a spot on Burger King’s menu last month in the chain’s Impossible Whopper. The company tested the burger in select locations throughout Missouri for several weeks before announcing a national roll-out to all U.S. stores as well as locations in Canada and soon, Europe. White Castle and Red Robin also offer the vegan burger.

The move to offer vegan meat would be a first for Dunkin’ — despite efforts to make the brand more “millennial-friendly” it has yet to offer a veganizable menu. Last September, customers waged bets on which chain — Dunkin’ or Krispy Kreme — would be the first to offer a vegan donut option. Neither chain has launched one yet.