The chain’s vice president of marketing strategy, Jill Nelson, said in a statement that adding the dairy-free milk to menus nationwide “was the perfect next step to bringing even more choice to [the] menu.”

“Dunkin’ is all about democratizing trends, and we’re thrilled to give guests across the country access to one of the fastest-growing dairy alternatives, oat milk,” Nelson said.

Although Dunkin’ vegan donuts aren’t on the menu yet, the chain has been working to expand its plant-based options. Last November, it added plant-based breakfast sausages made by California-based brand Beyond Meat. In an interview with CNBC, Dunkin’ CEO David Hoffman said: “I think this is going to be a partnership for years to come.” 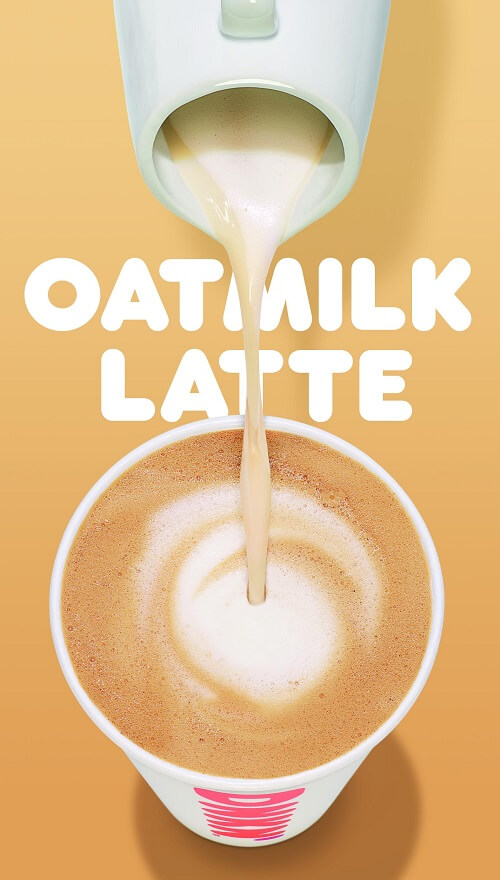 Dunkin’ isn’t the only coffee chain that has added oat milk to the menu.

Earlier this year, Starbucks launched Oatly’s plant-based milk across 1,300 Midwest states, including Illinois, Indiana, and Wisconsin. The coffee chain added the Oatmilk Honey Latte to its menu. The latte features Starbucks Blonde Espresso infused with honey, steamed oat milk, and a honey topping—which can be made vegan by omitting the honey. Customers can also order the oat milk in traditional lattes.

Oat milk’s surge in popularity began in 2016 when Swedish brand Oatly launched in the U.S.

The plant-based milk, which is made by blending oats with water and removing the fiber, quickly became popular with baristas due to how similarly it foams like dairy milk. Last April, Oatly opened a $15 million processing plant—its first outside of Europe—in Millville, New Jersey to help meet demand.