Youtube star The EdgyVeg, otherwise known as Candice Hutchings, has released her first ever cookbook and it ‘has received the signature carnivore stamp of approval from her husband James and their friends and family.’

The popular youtube has taken plant-based cooking to the next level. Instead of focusing on a ‘traditional’ vegan diet, she’s veganised the comfort foods that everyone will crave the most, making this cookbook a household must-have for everyone, not just vegans. 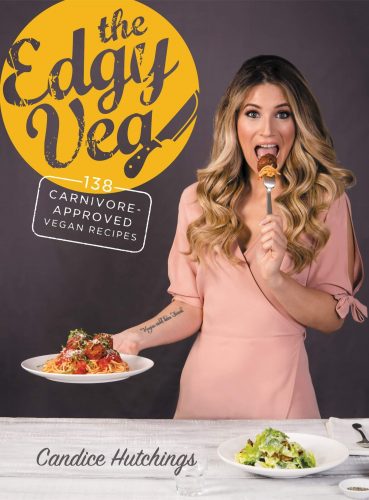 Candice concocted the delicious recipes at her home where she lives with husband James and two rescue dogs, Sir Winston Churchill and Harley Quinn. Her sense of humour encompasses all the things your parents would find funny, and you won’t be short of dad jokes in her cookbook.

Candice has already had huge success on The EdgyVeg youtube channel where she has over a quarter of a million subscribers and more than 630,000 people tuning in monthly to watch her.

The cookbook, chock full of ‘childhood cravings’ is available at most major retailers.