Vegan protein made from GMO cotton that could meet the daily requirements of 600 million people could be on the horizon – and, apparently, it tastes like hummus.

Fortune reports that the USDA has given the green light to the commercialization of a cotton plant with edible seeds made with biotechnology.

The new crop was created by scientists at Texas A&M University, who have been working on its development for 23 years. It is still pending approval from the FDA, but once the administration gives the plant the go-ahead, farmers will be able to grow the cotton for plant-based protein and fiber.

“It’ll taste like hummus. It’s not at all unpleasant,” said Texas A&M professor Keerti Rathorne, who holds a Ph.D. in plant physiology. Over the course of more than two decades, Rathorne learned how to “silence” a gene in GMO cotton plants that produce a toxin called gossypol. Without gossypol, the plant is reportedly safe for human consumption. 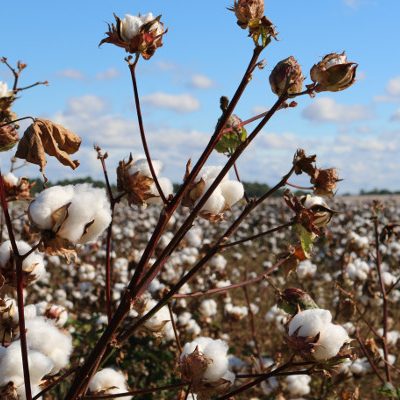 Would you eat protein made from cotton?

Kater Hake, vice president at Cotton Inc., which funded the project in addition to providing research and marketing for growers, says that commercial production is still several years off, but that cottonseeds, a type of tree nut, are a rich source of protein. If commercial production were to take off, 600 million could meet their daily requirements with vegan protein.

The company has already begun experimenting with cottonseeds’ potential as a food source in various forms by making plant-based cottonseed milk as well as crackers, cookies, nut butters, and nut-free chopped nuts. Rathorn also believes that the seeds could be used to make a vegan protein powder that could be blended into bars and flours.

The edible cottonseeds will also cut down on waste, as the gossypol in the standard plant renders the seeds useless. Farmers who adopt the toxin-free crop will be free to sell the seeds for other purposes. It could also be used to replace “up to half of all fishmeal” for fish raised for food like salmon and trout, though as studies have shown, not only do fish feel pain, seafood is also an unsustainable industry.

Hake believes that when approved, every cotton grower will eventually adopt the new crop. “There’s no reason to leave a toxin in a domesticated plant,” he said.