Updated June 2019 | Edinburgh is getting a vegan supermarket this summer.

Shop owner Alasdair Corbett confirmed the new supermarket on Facebook, asking others to help decide on a name. Easter Greens — named after the road in Leith it’s due to open on — is taking the lead.

Edinburgh has steadily grown into a travel destination for plant-based food in recent years.

The city’s evolution may have to do with the public’s growing awareness of animal agriculture’s negative impact on health, the environment, and other living beings. One study found that 50 percent of residents in the Scottish Highlands are reducing meat consumption to combat climate change. 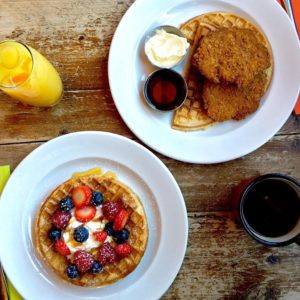 Earlier this year, the Scottish Sun reported that a record number of Scots went vegan in January — a change more popular than Dry January. The publication noted that 350,000 follow a plant-based diet.

Along with Bristol and Portland, Oregon in the U.S., it was named one of the top three cities out of a list of 20 for vegan eats earlier this year. The Scottish capital had 160 vegan-friendly restaurants at the time of ranking, more than any other city in the nation. It’s because of this that some say Edinburgh is the vegan capital of Scotland.

“Whilst Edinburgh has been well serviced by vegetarian establishments for decades, there have never been very many vegan places at any one time and there has never been a vegan bar,” Craig Tannock, director of vegan bar and restaurant Harmonium, told iNews in July 2017.

There are established vegan restaurants such as Holy Cow, Nova Pizza, and Henderson’s Vegan Bistro as well as a thriving community. The city even has a vegan clothing store; Treen in Stockbridge offers a selection of ethically-sourced vegan items, including clothes, footwear, and accessories.

“Vegans are now as well catered for as vegetarians were 10 years ago – it is becoming a normal choice for people,” said David Harrington, founder of the local EdVeg vegan and vegetarian society. “There are many active community groups, including dedicated groups for vegan runners, cookery classes and social groups.”

Edinburgh’s new vegan supermarket is set to open this August.