For a limited time starting July 16, three select Denver stores will offer the Beyond Sausage Spicy Sunrise sandwich. The limited-time breakfast sandwich features California-based brand Beyond Meat’s Beyond Breakfast Sausage on a Green Chile Gourmet Bagel with avocado, eggs, cheddar cheese, and cream cheese. The patty is made from pea and brown rice protein.

“As consumer interest around plant-based meat continues to grow, we’re thrilled to team up with Einstein Bros. Bagels to test our Beyond Breakfast Sausage in the Denver area,” Stuart Kronauge, Chief Marketing Officer at Beyond Meat, said in a statement.

The test will take place at the Einstein Bros. Bagels locations on Colorado Boulevard and Broadway in Highlands Park and on Parker Road in Denver. 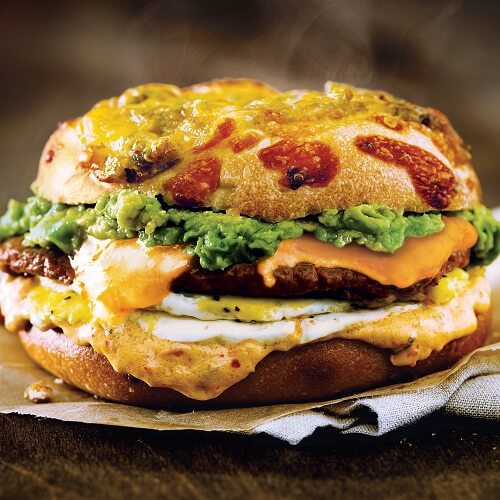 With more than 700 locations, Einstein Bros. is the largest bagel chain in the country. According to the chain’s allergen information, the Green Chile Gourmet Bagel used for the Beyond Sausage Spicy Sunrise contains dairy. But, more than 70 percent of the bagel menu is vegan.

Following that, in February 2019, Coffee & Bagel Brands, parent company to Einstein Bros. Bagels, Noah’s New York Bagels, and Bruegger’s Bagels, added dairy-free cream cheese made by vegan brand Daiya to the menu of all three chains. Jose Alberto Dueñas, president and CEO of Coffee & Bagel Brands, said that the move was due to customer requests.

Consumer interest in dairy-free cheese is on the rise. According to the Good Food Institute, a nonprofit focused on the acceleration of plant-based alternatives, the vegan cheese market was worth $189 million in 2019. Dollar sales have increased by 51 percent over the past two years.

The Beyond Breakfast Sausage

Einstein Bros. Bagels isn’t the only chain to feature the meat-free breakfast sausage. Coffee and donut chain Dunkin’ launched its own Beyond Meat breakfast sandwich in November 2019 following a successful trial in NYC over the summer. Fast-food chains Hardee’s and Carl’s Jr. also launched the breakfast sausage late last year.