Elon Musk is a force to be reckoned with in the modern world. The divisive and ambitious 47-year-old tech entrepreneur sits at the helm of both Tesla and SpaceX. He also had a hand in the creation of SolarCity and is the current CEO.

Musk ranked 54th on Forbes’ 2018 list of The World’s Billionaires, with a net worth of $21 billion. Musk is a “big picture” kind of guy. Many of the tech titan’s ventures have had a hand in changing the way we think about long-established systems, like the democratization of payment processing via PayPal, which likely inspired Venmo.

Some of his ventures, like The Boring Company, which promised to fix the traffic problem with tunnels, were good in theory, but not in practice. Many experts have pointed out that his tunnel transit concept isn’t sustainable.

Scientists have also pushed back at his conviction that humans will reach Mars within the next decade — more on that later. Despite his optimism regarding new technology, Musk’s reservations about artificial intelligence (AI) are famous, referring to the advancement of machine learning as the “biggest existential threat” to humanity in 2014. He acknowledges that AI could benefit humankind, but also believes that superintelligent machines could have dangerous consequences if they become smarter than people. Two of his companies — Neuralink, and OpenAI — want to develop safe AI.

Despite last July’s cringe-worthy Tweet over the rescue of the Thai soccer team trapped in a cave and his bizarre, Harambe-inspired rap, Musk’s ventures have the potential to create a better, more planet-friendly — and maybe even a bit more vegan — world. 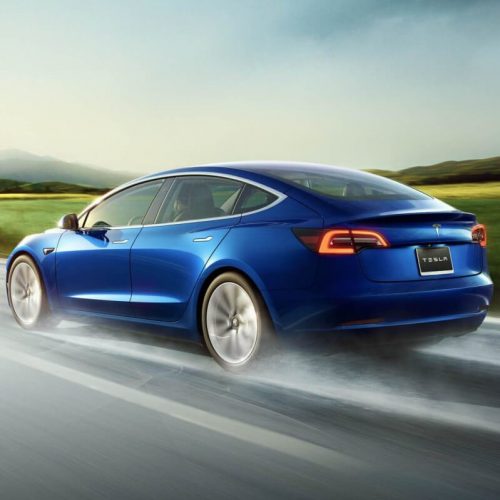 When PayPal sold to eBay in 2002, Musk used that funding to start Tesla. Officially launched in 2003, the electric car manufacturer based in Palo Alto, California, Tesla has had a huge impact on the automotive industry in just shy of 16 years. Its mission is to “to accelerate the world’s transition to sustainable energy.”

The company has both revived and innovated the electric vehicle, turning the once-mocked signature car of nagging hippie environmentalists (no disrespect to the OG people who stood up for the planet) into something, in his own words, “sexy.”

The average personal vehicle emits an average of 4.6 metric tons of carbon dioxide (CO2) per year via its tailpipe, according to data from the EPA (Environmental Protection Agency). By contrast, an electric vehicle emits zero tailpipe emissions. Transportation is responsible for more greenhouse gas emissions (GHGs) than any other industry in the US — of course, this number also includes commercial vehicles, ships, planes, etc.

Tesla has launched three electric cars since its inception — the Model S, Model X, and Model 3, each coming with new improvements. On the vegan side of things, the company stopped offering leather seating in July 2017. Steering wheels still feature leather, but a vegan version is available upon request and Musk has hinted that future vehicles may not even have steering wheels.

The Model Y, unveiled earlier this year, will begin shipping in 2020. There is also the Tesla Roadster, an electric vehicle that seats four, which is expected to begin production in 2020. Musk is aware of the affordability issue. “While we have made great progress, our products are still too expensive for most people,” he wrote to employees last January, adding that “the road ahead is very difficult.” 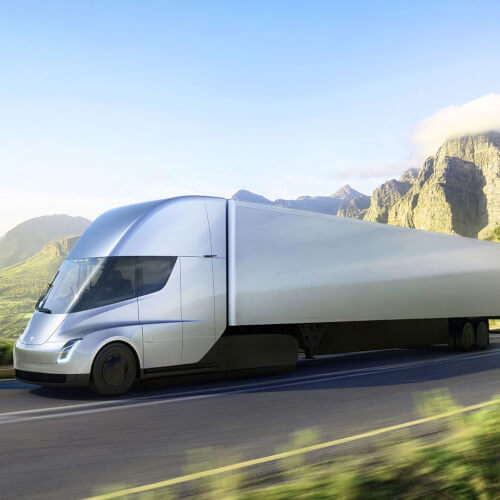 He announced earlier this year that Tesla would roll out a standard Model 3 starting at $35,000. He eventually hopes the company gets to a point where electric cars affordable to all.

Although Tesla’s focus has been on personal vehicles, Musk unveiled electric Class 8 semi-trailer trucks — which would come with Tesla Autopilot — in 2017 with production planned for 2020. Several top companies have already pre-ordered the truck, including FedEx, UPS, Walmart, Sysco, PepsiCo, and Anheuser-Busch.

Musk welcomes it. All Tesla patents were made public in 2014 in a bid to promote the advancement of the electric vehicle. As ambitious as he is — sometimes to a fault — Musk acknowledged that Tesla cannot create a more sustainable transportation system alone. “Our true competition is not the small trickle of non-Tesla electric cars being produced, but rather the enormous flood of gasoline cars pouring out of the world’s factories every day,” he wrote.

Tesla set the trend for top name manufacturers such as BMW, Nissan, Audi, and Volvo to release electric cars. 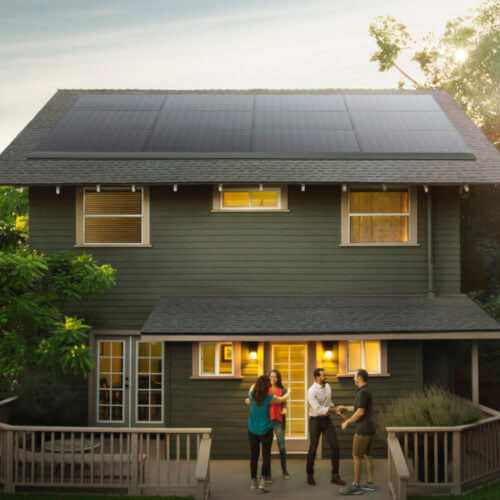 Launched in 2006 by Musk’s cousins Peter and Lindon Rive, SolarCity was acquired by Tesla for $2.6 billion in 2016 (the SolarCity site now redirects to Tesla). The company aims to help wean society off of fossil fuel dependency.

The company makes solar panels for residential homes, which were unveiled by Musk himself at Universal Studios LA backlot in October 2016, that blend almost-seamlessly-but-not-quite with shingled rooftops. It generates sustainable energy that lasts longer and costs less than solar panels that have come before.

The solar panels charge the Powerwall, a large, sleek panel on the side of the house that gathers energy during the day and takes overpowering everything at night. SolarCity also serves commercial businesses, schools, and agriculture, according to the website. 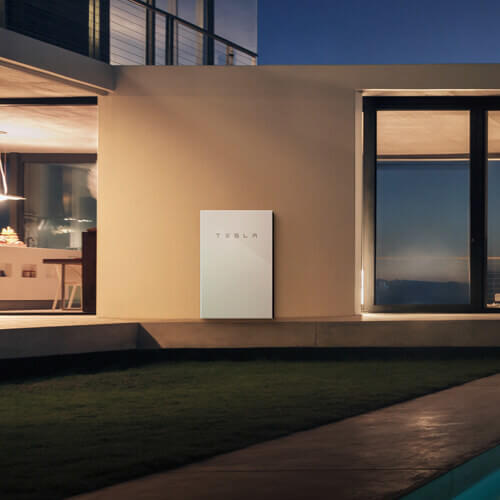 The PowerWall powers the home at night | image/Tesla

“This is the integrated future. You’ve got an electric car, a Powerwall, and a Solar Roof. It’s pretty straightforward, really,” Musk said at the unveiling. “[This] can solve the whole energy equation.”

The company remains hopeful that its solar and battery business will eventually be the same size as its automotive division, according to a statement sent to Reuters. 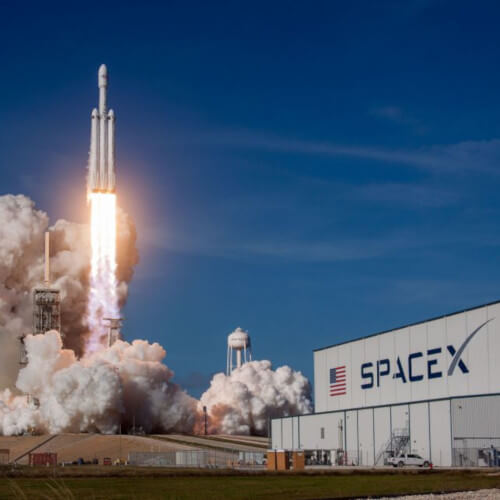 Space Exploration Technologies Corp., aka SpaceX, is a private spacecraft manufacturer and hopeful transportation company. Founded by Musk in 2002, SpaceX aims to revolutionize space technology and help people live on other planets. It has crafted three ships so far: the Dragon, Falcon 9, and Falcon Heavy, which had an attempted launch from the Kennedy Space Center in Florida this month.

The ever-ambitious Musk believes self-sustaining colonies on Mars may be possible within the next decade despite pushback from NASA that it’s “far beyond” current technology.

“I feel fairly confident that we can complete the ship and be ready for a launch in about five years. Five years seems like a long time to me,” Musk said at the International Astronautical Congress in Adelaide, Australia in September 2017. “Then build up the base, starting with one ship, then multiple ships, then start building out the city, then making the city bigger, and even bigger. And yeah, over time terraforming Mars and making it really a nice place to be.”

Speaking to SPACE.com, Musk responded, “I’m a big fan of free choice for any future Martian colony. That said, it is likely that early Mars colonists would have a mostly vegetable diet, because of the energy and space needed to raise farm animals.” 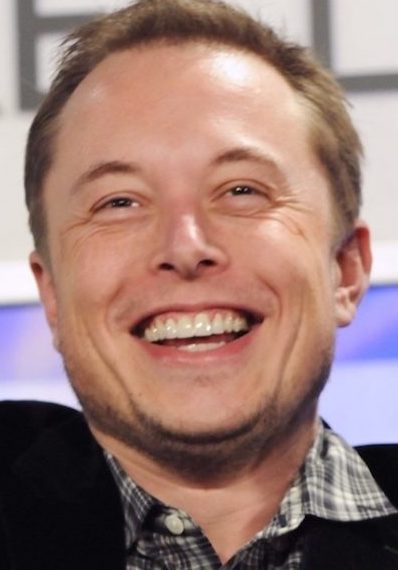 The Elon Musk Foundation is investing in a sustainable future

The Musk Foundation’s website is hilariously simple compared to the tech entrepreneur’s other ventures. “Musk Foundation. Grants are made in support of: Renewable energy research and advocacy, Human space exploration research and advocacy, Pediatric research, Science and engineering education, Development of safe artificial intelligence to benefit humanity,” it says, and nothing more.

An article published in The Guardian earlier this year notes that Musk has personal connections to some of the foundation’s charitable donations, including his children’s school and an art project at his favorite festival, Burning Man. But the Musk Foundation has also donated to a number of causes, including the Sierra Club, the National Wildlife Federation, Doctors Without Borders, the Haitian Relief Organization, and the Transgender Law Center. It also donated a grant for water filtration to Flint, Michigan, as well as money for laptops in Flint middle schools, according to Influence Watch. 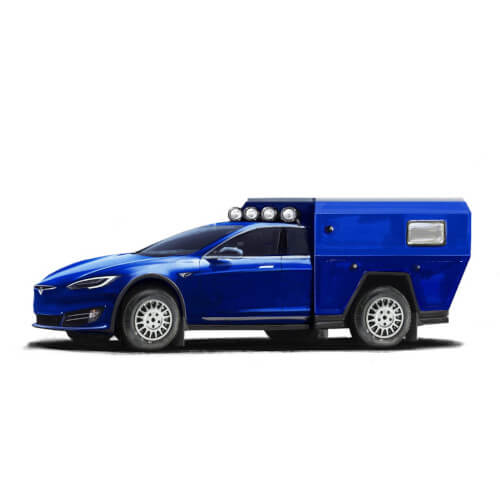 A rendering for the ‘Tesla’ Motorhome | image/TravisTravels

Musk’s ventures aren’t without downfalls, but his ambition — and his influence — deserve credit. It’s likely thanks to him that more companies are willing to take on the challenge of innovating sustainable technology. After all, would electric cars be as cool as they are now without Tesla? He also made the patents public, so anyone with the means to could theoretically develop their own electric car. One guy in Michigan even used a Model S to create a prototype for an electric motorhome.

Although ambitious, SolarCity has had its fair share of financial troubles. Stock dropped 77 percent from February 2014 to June 2017. One year later, Tesla announced that it would close a dozen solar facilities in nine states. Door-to-door sales also ended, the company’s most successful tactic for bringing in new customers, ended. The company ended its partnership with more than 800 Home Depot stores in June 2018, but the retailer still continues to sell solar panels. There’s a silver lining — last March, it signed deals with Sunrun and Vivint, both SolarCity’s junior.