Vegan actor and mom Emily Deschanel, the titular star of the Fox drama “Bones,” has shared her parenting tips and why she values compassion toward animals and the environment above all.

Deschanel, a vegan of 25 years, first became vegetarian “on the spot” after watching the 1991 documentary “Diet for a New America,” based on the 1987 bestselling book by John Robbins, the heir to the Baskin-Robbins fortune. After the screening, she was further convinced by a debate between doctors on whether meat and dairy are healthy. About two years later, at age 17, she adopted a plant-based diet.

“It convinced me about – you know, it’s all about the impact on the environment that meat and dairy has and that factory farming has on the environment, and what it does to the animals, how horribly they’re kept,” she said on the podcast. “How horribly they’re treated and killed for us to eat, and then it’s about how it affects our health. It was always the triple-whammy that really affected me.” 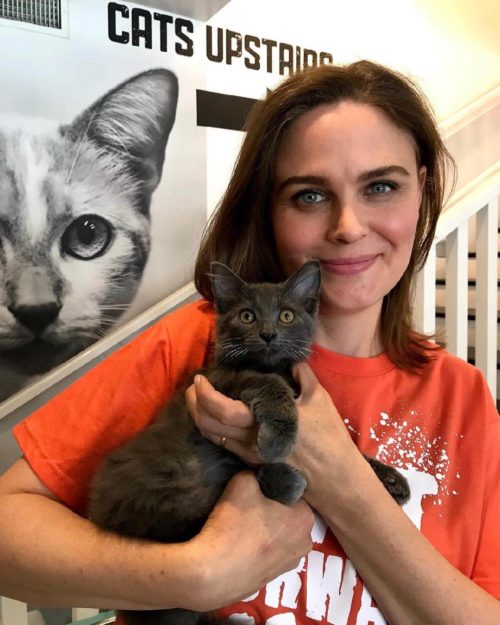 Deschanel revealed last September that she likes to refer to her seven-year-old son, Henry, as “the vegan police.” The six-year-old made the choice to go vegan and is very health-conscious, according to his mom.

“He won’t even eat candy because it’s not healthy,” she said on the podcast. On Halloween, he gave his candy to the “Switch Witch” – a Tooth Fairy-like entity that exchanges candy for toys and healthy snacks.

When it comes to social interactions, Deschanel is always sure to bring snacks so Henry has something to eat. She and the co-hosts agreed that it’s always better to be safe than to end up in an awkward situation where the host is unfamiliar with plant-based food.

Vegan for the Animals and the Planet

The “Bones” star went on to talk about how while health is important, the animals were always the driving factor behind her veganism. Today, Deschanel is active in the community; she is a board member of Farm Sanctuary — the largest haven for rescued farm animals in the nation — and regularly participates in fundraising events. She also regularly promotes pet adoption.

Last September, she helped raise $1.2 million for the animal rights non-profit, Mercy for Animals. She is also an investor in Outstanding Foods, which makes vegan mushroom bacon chips.

“Looking a certain way does not motivate me. But being healthy, being kind to animals, being kind to our environment, to me, that’s the thing that motivates me the most,” she said. Along with a vegetarian friend, Deschanel started an animal rights club in her Santa Monica high school that is still active to this day.

Speaking about how the media has received her veganism, Deschanel revealed that it has made her unable to participate in certain photo shoots due to her ethics.

As for fashion, she keeps it vegan, but will purchase vintage silk due to concerns over the environmental impact of the synthetic version, which is often made from polyester. “[There are] so many things to consider when you’re buying something,” she said.

She finished the podcast with a vegan restaurant recommendation. “Crossroads is just the best vegan restaurant,” she said, listing the crab cakes and “Artichoke Oysters” as her favorite dishes at the LA restaurant.