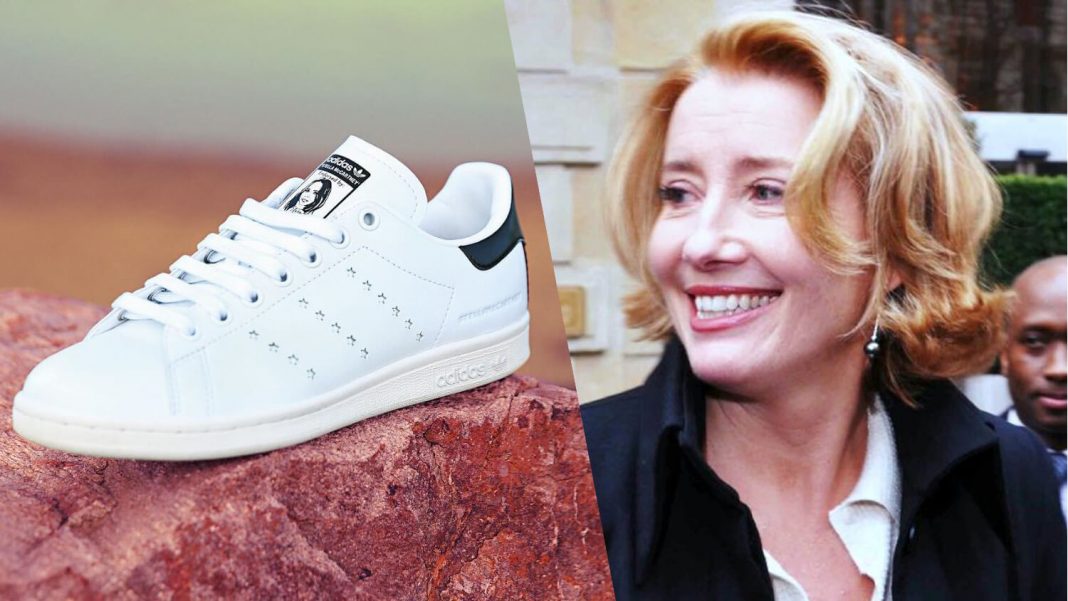 British Academy Award-winning actor Emma Thompson recently visited Buckingham Palace to accept a damehood from Prince William for her services in acting and drama. But in true Thompson style, the A-Lister threw out the unwritten rules of fashion and royal engagements, choosing to sport a blue Stella McCartney suit, an equal pay badge, and vegan Stella McCartney x Stan Smith sneakers to receive her honour.

In her 29 years of being in the spotlight, Thompson has often disregarded protocol at award ceremonies, be it through her clothes or through her speeches. At the 2014 Golden Globe Awards, the “Love Actually” star walked on stage barefoot – Louboutins in hand – claiming her feet were too bloody and sore to wear the shoes.

Her choice of footwear for the royal ceremony may be unorthodox, but it’s certainly not unethical. Vegan designer Stella McCartney prides herself on sourcing materials in the most sustainable, environmentally friendly, and ethical way possible. Modeled on the original design influenced by 1970’s Wimbledon champion Stan Smith, and made from animal-free leather, McCartney’s sneaker has a host of celebrity fans including Madonna, the Duchess of Sussex herself Meghan Markle, and of course, Thompson.

Changing the Future of Fashion

Even Smith himself has given the vegan shoes his approval, stating earlier this year that working with the designer was “great.” He said, “She wants to have all my shoes vegan, I’m not sure if that’s going to happen or not. But you never know, she has a big influence on fashion and has been working with Adidas for a really long time. This is the first time I’ve shared my face with someone else’s. With her, it’s great. Somebody else might not have been so good.”

Through the creation of vegan alternatives to animal products – such as fur or leather – and by using recycled materials, Stella McCartney is helping to change the future of fashion into one that is more sustainable and more ethical.

In July, the Stella McCartney brand was even ranked number one for empathy, generosity, and kindness on the New York-based Luxury Institute’s annual “Emotionally Intelligent Brand Index.”

The company notes on its website, “We are agents of change. We challenge and push boundaries to make luxurious products in a way that is fit for the world we live in today and the future: beautiful and sustainable. No compromises.”