A black rhinoceros calf cries out into the night in terror as poachers hack the horn from her still-breathing mother. In terror, the baby runs into the bushes away from the horror and the noises.

After being recovered by the anti-poaching unit and receiving medical care to nurse her back to strength, the young rhino, named Miss T, is moved to a rhino orphanage to be hand-reared.

Miss T was later moved to a wildlife reserve and finally released into the wild about 6 years ago. She now has a remarkable survival story, despite her hearing difficulties, the results of a birth defect.

Recently, her second calf was born. She is a beautiful, bouncy, and a rather goofy girl. A very talkative one at that (due to Mom not having great hearing). Miss T has turned out to be an incredible mum, doing all she can to keep herself and her baby safe. But unfortunately, with increased poaching of rhinos for their horns, she needs human heroes (anti-poaching units) to help keep her and her newborn safe.

The black rhino is a critically endangered animal. Only about 5,000 are thought to be left in the wild. In the 1970s, there were more than 65,000 black rhinos roaming the continent.

At the reserve, where Miss T and her baby live, a rhino protection levy is included as part of each guest’s visit. There are also guest activities that add to this fund. The fund is used to ensure that the Anti-Poaching Unit has the equipment, materials, and training they need to be able to successfully protect these vulnerable animals. The APU is as essential to the reserve Reserve as oxygen to breathing. That’s no overstatement. The roles performed by these wildlife warriors are to monitor the animals with tech, keep track of their movements, protect and ensure that the fencing and materials in the reserve are not tampered with.

Without these brave people, the animals would be vulnerable to attack from high tech poachers. Especially in the case of animals like Miss T. 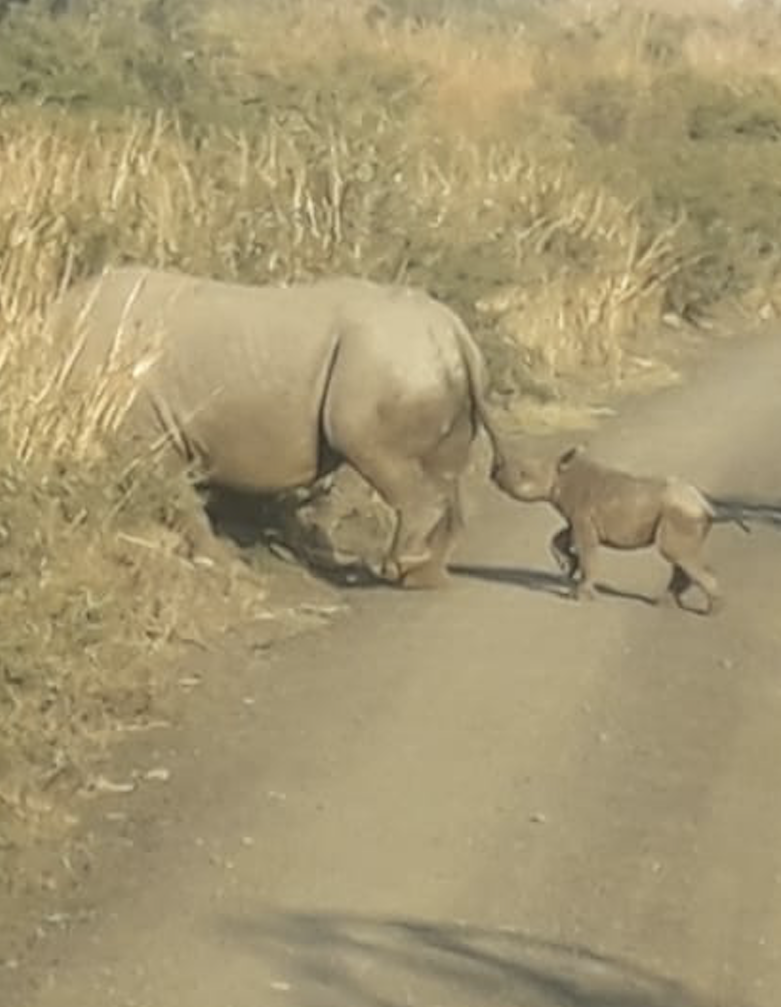 Miss T and her baby wander into the bush

Conservation on the Reserve

I have personally spent time on the reserve and can honestly say that this Mum deserves our help and support. She is an absolute delight to watch as she moves effortlessly through the African grasslands, totally unaware of how special she really is and how critical her role is in the continuation of her species.

The reserve has a comprehensive record of success stories in conservation, but with the onset of COVID-19, the tourism industry has been struck an almost fatal blow. The lifeblood of funding provided by guests has been cut off, leaving the Reserve with a very dire outlook and a shortfall in trying to care for its inhabitants. A surge in poaching of endangered wildlife in South Africa has also put conservationists on edge, fearing for the life of Miss T and others like her.

All the rhinos at Nambiti Reserve have been dehorned in an effort to protect them from poaching.  Rhino dehorning is seen as a temporary measure to prevent the killing of a Rhino for its horn by poachers.  Dehorning does not hurt the animal or in any way affect its behaviour. But more help is needed. Funds are required to keep rangers on the land and ensure the safety of these magnificent creatures.

Will you help fund the protection of these endangered rhinos and help keep Miss T and her calf safe? Learn more about how you can help here. To make a donation via PayPal, go here.