Traditional soybean-based tofu is getting a run for its money. A new brand of tofu just launched at Whole Foods—and it’s made from chickpeas.

Chikfu debuted at 14 Whole Foods Markets in Dallas and Fort Worth, Texas.

Jigisha Patel founded the company in 2019 after going vegan. She had previously been a vegetarian for 25 years. After attending a plant-based foods conference in 2019—she learned of the many benefits of eating plant-based and decided to transform her diet.

“I just wanted to have a healthy lifestyle,” Patel told LIVEKINDLY. “Going to that conference and learning the data, the medical data that they present, it really, really just made us say, ‘okay, it’s time to make the move and go vegan.’”

And Patel says she’s definitely seen an improvement in her health from eating a plant-based diet. “So we cut out all the dairy and everything from our diet. And it has made me feel a lot better than before. And my husband, as well,” she explained.

“Some of the aches and pains that I had—they have disappeared because I completely cut out dairy from my diet,” she said.

Although Jigisha quickly embraced her new plant-based diet, she was worried about consuming too much soy.

She also didn’t want to miss out on enjoying classic Indian cuisine staples—especially paneer, a type of cheese that’s common in India.

“Since I couldn’t have paneer, I wanted to make those Indian dishes like chicken masala and curries,” Patel said. So she set about creating her own soy-free protein source based on a recipe by her mother.

“I was trying to make what she was making, and it did not turn out the way she was making it. So it is somewhat of her recipe, but it was also a little bit of a mistake that I made, and I kind of incorporated it all together,” Patel explained. 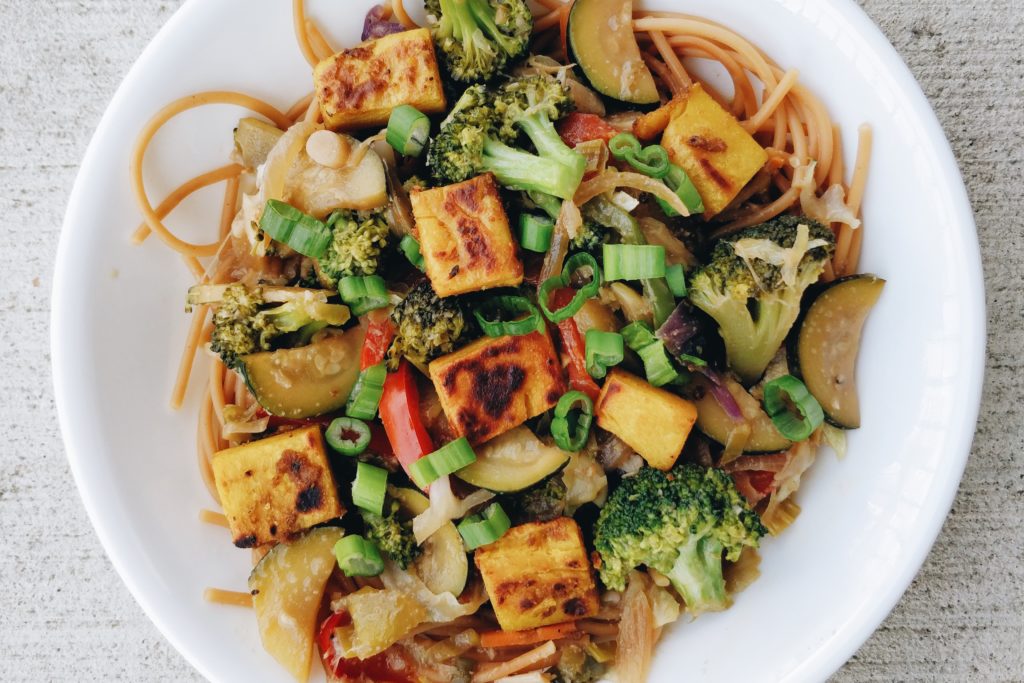 The chickpea-based tofu can be used as a base in a number of dishes. | Chikfu

In addition to Indian staples, Chikfu can also be used in a wide variety of dishes like burgers and tacos, or Patel’s personal favorite: veggie wraps.

“I just love it and everything, but I would say I really like the fresh taste and the texture of it with my salad wrap. It tastes wonderful,” she said.

Once she got the seal of approval from her family and friends, Patel started selling the chickpea tofu at local farmers’ markets. However, once the coronavirus pandemic hit, she was forced to only sell her Chikfu online. That was until she landed the placement at Whole Foods, something she’d heard was very hard to do.

Whole Foods has a team of local foragers that tries products from local vendors, such as Chikfu. One of the foragers reached out to Patel and said she’d like to present Chikfu at the company’s next meeting.

“We were thrilled to even hear from them. And then when they said they wanted to stock us—It was almost like a dream,” she said.

Patel continued: “If anybody is looking to eat a healthy plant-based diet, I think this is one of the options that they could enjoy. And I’m sure they will enjoy it as much as myself.”