Vegan actor, activist, podcast host, and now amateur dancer Evanna Lynch won’t be wearing leather on her feet when she takes to the grand stage of ABC’s “Dancing With the Stars.”

On her Instagram story, the Irish actor recently showed off what is likely one of several pairs of cruelty-free dance kicks that she’ll don throughout the course of the hit reality competition series. “Check out that cute little ‘V’ for vegan ballroom dancing shoes,” Lynch wrote, showing the bottom of her neutral satin finish heeled shoe.

While the logo was partially obscured, Lynch’s leather-free shoes appear to be from the UK-based brand International Dance Shoes. The company offers a variety of bespoke vegan and cruelty-free dancing shoes. 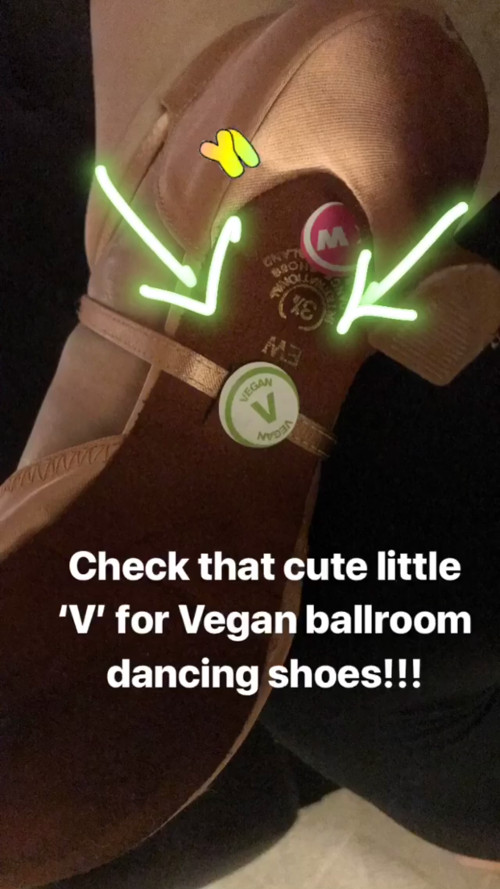 Lynch was announced as a competitor on the upcoming 27th season of “Dancing with the Stars” last week, an opportunity that she claims is a lifelong dream. Her partner is 28-year-old South African professional dancer Keo Motsepe, who first appeared in season 20.

Lynch is not just a soon-to-be dance sensation, she is also a staunch supporter of animal rights and a vegan business entrepreneur. In July,  the former Harry Potter star announced she will soon launch a cruelty-free beauty subscription box; she is passionately against animal testing in the cosmetic industry, even undergoing “testing” herself, for a recent peta2 video campaign. “If you’re not OK with putting animals through these tests, then maybe you should only be buying cosmetics that are truly cruelty-free,” she said in the clip.

The activist also frequently appears at animal rights events. In August, she spoke at London’s Animal Rights March to an audience of thousands.

Lynch is also the co-host of the popular podcast, “The Chickpeeps,” alongside Harry Potter co-star, Robbie Jarvis. They call it a “friendly, fun, mad-curious vegan podcast.”

Lynch will be competing against a number of celebrities and athletes including Olympian Mary Lou Retton, former Denver Broncos linebacker DeMarcus Ware, and comedian Nikki Glaser. The new season of “Dancing with the Stars” will begin on September 24 at 8 pm.