In a recent podcast, Joe Rogan compared what happens to SeaWorld orcas to slavery.

“First of all, what [expletive] are we that we have those [expletive] things in captivity. A big [expletive] shoutout to Canada because [they] mostly through the noise that my friend Phil Demers has created in trying to get MarineLand shut down,” Rogan told his guest, economist and mathematician Eric Weinstein. “Canada has banned all dolphin and all whale captivity, it’s amazing. I hope the United States does it too. I hope it goes worldwide.”

Rogan hesitated before adding his next observation: “I think it’s slavery, I really do. I think it’s a different kind of slavery.”

How Sentient Are Dolphins and Whales?

Weinstein built on Rogan’s statement by saying that whales are like humans. We still know little about whales, but it’s widely accepted that they are intelligent, social animals.

They have advanced communication skills — even names for each other — and specialized brain cells called “spindle neurons” associated with problem-solving, social learning, memory, reasoning, perceiving, and adapting to change. The part of their brain that processes emotions seems to be even more advanced than human brains, according to Whale and Dolphin Conservation. There have even been instances of whales displaying altruism, such as humpbacks appearing to save seals from orca attacks.

Orcas are known to travel up to 75 miles per day according to the Center for Whale Research. Their tanks are minuscule in comparison. Their average life expectancy is up to 100-years-old for females and 70 for males, but the life of the average SeaWorld orca ends at 14. At least 49 orcas have died in their care.

Collapsed dorsal fins are common and while SeaWorld claims this is common, it’s often the sign of an unhealthy whale. Captive orcas show signs of zoochosis, a mental condition where captive animals exhibit repetitive behaviors, violent outbursts toward humans and other whales, and self-destructive habits such as damaging their teeth from gnawing on iron bars and concrete. The infamous theatrical orca shows, which are being replaced with “educational” Orca Encounters, forced whales to perform tricks for entertainment. 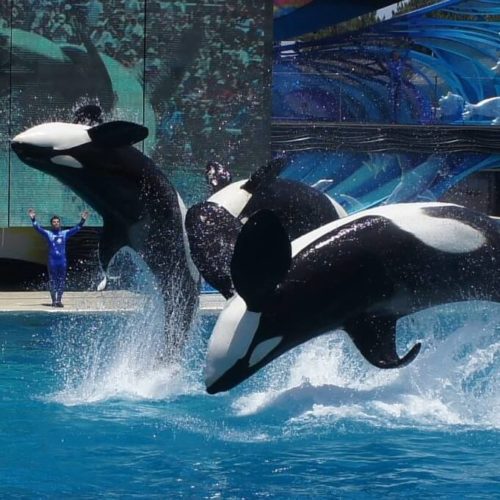 Captive orcas perform at a show

Former SeaWorld trainer Jeff Venture told Wired in 2011 that the captive orca’s aggressive behavior is “a direct byproduct of the stress associated with captivity.”

Rogan’s use of the word “slavery” is loaded. In the United States, it immediately evokes imagery of the chattel slave system that was in place until Lincoln’s Emancipation Proclamation in 1863. (It wasn’t until two years later, in 1865, that slaves in Texas were freed and that’s what Juneteenth is about.)

There have been previous comparisons between animal rights and slavery. In 2011, international animal rights group PETA (People for the Ethical Treatment of Animals) filed a lawsuit against SeaWorld on behalf of five captive orcas, invoking the 13th Amendment which abolished slavery “except as a punishment for crime.”

The organization said that the whales were forcibly taken from their natural habitats to be held captive and “denied everything that is natural to them, subjected to artificial insemination or sperm collection to breed performers for Defendants’ shows, and forced to perform, all for Defendants’ profit. As such, Plaintiffs are held in slavery and involuntary servitude.”

In February 2012, U.S. District Judge Jeffrey Miller dismissed the case, stating that the 13th Amendment does not apply to “non-persons such as orcas.” According to the Nonhuman Rights Project, a nonprofit dedicated to securing legal rights for animals, there is sufficient scientific evidence that orcas “possess that autonomy that is sufficient for personhood and the fundamental legal right to bodily liberty.”

There have been many who have spoken up about invoking slavery to talk about animal rights, particularly when it’s done by white people. Writing on the subject for the site Striving Within Systems, vegan author, researcher, and lecturer Christopher Sebastian said: “Basically what we’re looking at is a pattern whereby blackness is used and commodified at different times and by different groups to further an agenda without offering any type of real solidarity on black issues. And if animal rights doesn’t address this, our activism will be no different.”

While the post is related to a white vegan dropping the slavery analogy at dinner, and Rogan is decidedly anti-vegan, his use of the word to talk about SeaWorld could use some nuance. Sebastian has two pieces of advice before entering these types of discussions:

“Stop being too liberal with how we apply such incendiary language, and learn to employ better sensitivity and discernment when approaching these discussions” and “Amplify the voices of marginalized people who talk about these issues themselves instead of appropriating their histories or experiences to further our agendas.”

Taking the time to learn about different forms of oppression is important, too: “Make an attempt to understand how layered oppressions impact different groups to maximize our impact and build a broader, more inclusive community.”