An eclectic Calypso-inspired restaurant in Denver just took a major step in the vegan direction. Known for its vegan and non-vegan donuts, Bang Up to the Elephant recently made the commitment to ditch the animal products and only sell vegan donuts.

“There’s no looking back,” said owner Kevin Delk in an interview with Westword, a Denver media publication. The restaurant made the switch in late April, just a few months after its opening in January. Prior to this decision, the full-service eatery offered three non-vegan donut flavors each morning, in addition to the daily vegan-friendly Dirty Banana Balz. However, as customer demand for vegan options grew, Delk was inspired to go completely plant-based – at least as far as his donuts.

Delk explained to Westword, “It’s partly a fun challenge, but it’s also because more and more of us are interested in cutting down or even cutting out dairy in our diets.” He continued, “Minimizing our grocery list is fun in that it opens up the door to learning about new cooking approaches and ingredients, plus it’s good for the environment — all while making your body happy.” 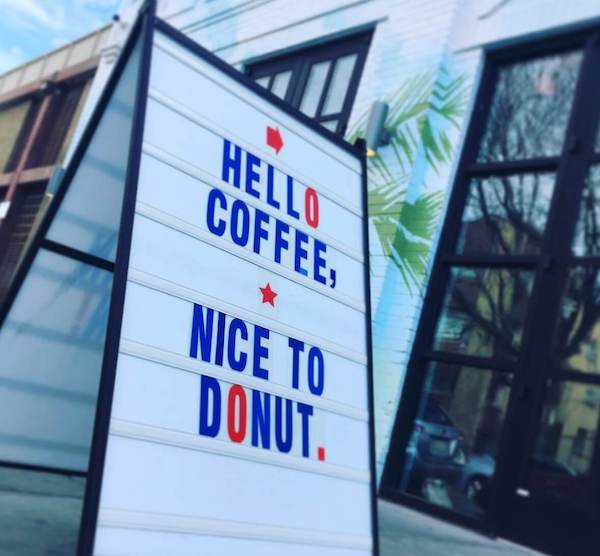 In regard to flavors, don’t expect a plain old-fashioned or simple glazed round. Delk’s creations are as innovative as his restaurant’s name. In line with the island theme, Delk said he has recently been inspired by tropical drinks. Following the success of the Easter Bunny-themed donuts, he noted, “We’re also playing with future selections that will play off cute plants and cuddly animals.” Perhaps a pina colada-flavored, palm tree-shaped donut is on the horizon.

Beyond the daily donuts, Bang Up to the Elephant offers full breakfast, brunch, lunch, and dinner menus. Although not entirely vegan nor vegetarian, the menu is clearly marked with plant-based options, and several of the animal-based dishes can be made vegan upon request. The food is a mashup of “Calypso” culture, featuring jerk seasonings, rotis, curries, and plenty of plantains. Try the Scotch Bonnet Tamarind Seitan Wings, Jackfruit Roti, Seitan Cubano, or the Bowl-O-Coconut Peas & Peppers for a taste of the islands in the mountains of Colorado.

Both vegan donuts and vegan options, in general, are gaining traction as customers begin to seek out and ask for plant-based options. Companies and restauranteurs are listening and responding to consumer demand, which has led to delicious innovation in the culinary space.

Image Credit: Bang Up to the Elephant