Plastic expiry date labels have appeared on more than a thousand products in supermarkets across London.

The labels—spotted on meal deal items like smoothie bottles and salad containers—give an expiry date of 2499, and encourage the consumer to recycle.

Plastic fills our landfills, waterways, and our oceans, endangering marine life and ecosystems. By 2050, a report by the Ellen MacArthur Foundation predicts there could be more plastic in the sea than fish.

“So much plastic is being consumed that there is an area bigger than France of throw-away plastic swirling at all depths in the North Pacific Ocean,” says Greenpeace on its website. “It has become so ubiquitous that birds are using it to build their nests.”

Once lauded for its durability and longevity, plastic has undeniably become a problem. Every single piece of it ever made still exists, and we’re still producing more. Despite some efforts from supermarkets to reduce their plastic use, it still appears on shelves up and down the country. 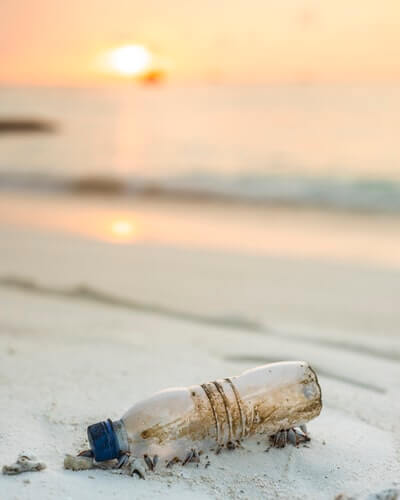 By 2050, there could be more plastic than fish in the sea.

‘Your Meal Deal Could Be Pretty Much Immortal’

Speaking to the Manchester Evening News, the duo explained, “imagine this. It’s the year 3019. Animals can now be tried in court. The prisons are overflowing with pigeons. You are no longer around. But the plastic water bottle you bought with your meal deal in 2020 has finally started to decompose.”

“Even if the future isn’t quite as weird as that, it is true that your meal deal could be pretty much immortal,” they continued.

Their idea is catching on. According to the newspaper, more stickers have been spotted in other areas around the UK. Jhuti and Foale-Groves say their plan is to get supermarkets to change their ways and ditch single-use plastic for good.

“The ultimate goal would be for supermarkets to add the plastic expiry date to packaging themselves,” said the duo. “As well as hurrying to remove single-use plastic packaging from their shelves.”