Are you in need of a great film to watch during your next family movie night? Snuggle up and enjoy some classic family movies that share a message of compassion for all species.

We’ve compiled the best family movies that remind us to care for all living beings. Here are our top picks for movies with an underlying vegan message. 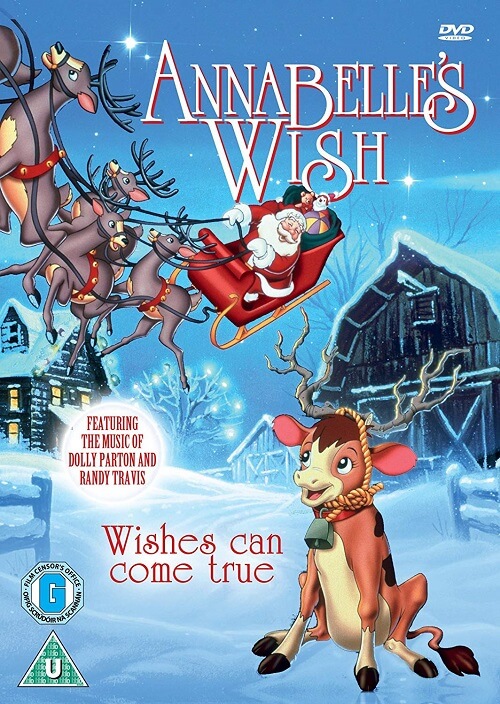 Annabelle’s Wish shows how humans and cows can be friends.

But, the two form a friendship that lasts a lifetime. Billy gives up his beloved possessions to save his cow from being taken away. In turn, Annabelle selflessly wishes for Santa to give her friend his voice back, giving up her own voice in order to do so. The two live together until Annabelle is an old cow, teaching a valuable lesson about friendship and empathy toward animals. 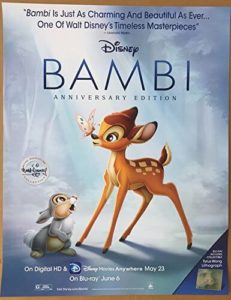 Hunters were not happy with their portrayal in “Bambi.”

Disney’s 1942 classic “Bambi,” based on the 1923 Austrian book, is about a young deer growing up in the forest. Bambi loses his mother to a hunter at a young age, revealing the bleak reality of hunting animals for sport. Later in the film, a wildfire starts as the result of an unattended fire at a hunter’s camp, forcing the animals to flee their homes. Bambi faced harsh criticism at the time of its release for straying from the fantasy world that Disney was known for. The 1942 edition of the magazine Outdoor Life called the movie “… the worst insult ever offered in any form to American sportsmen.” However, today, Bambi is considered a timeless classic whose lesson reaches people of all ages. 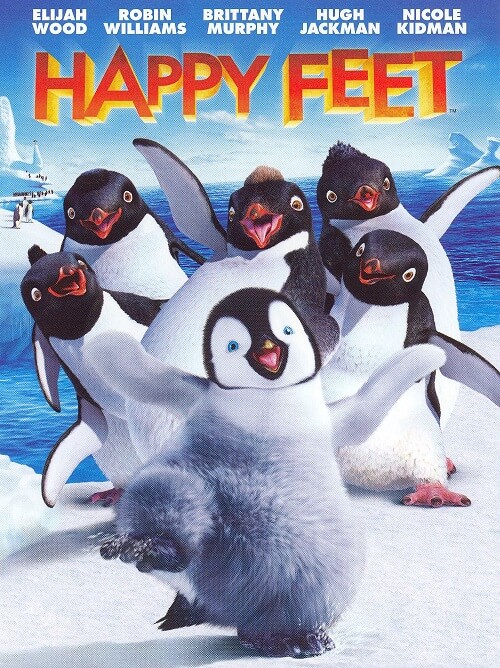 “Happy Feet” is a 2006 CGI film that takes place in Antarctica, where Emperor penguins sing to attract their mates. But, the main character, a young penguin named Mumble played by Elijah Wood, can’t sing — he can only dance. The story is mainly about Mumble finding his place in the world, but it also shows how humanity impacts wildlife. Lovelace, a rockhopper penguin, has a plastic six-pack ring stuck around his neck. Later in the film, humans catch and send Mumble to a marine park. There, he becomes depressed, echoing the reality for animals in captivity. He is eventually returned to his family, and researchers learn that animals are struggling to survive as a result of overfishing. This leads to a ban on all fishing in Antarctica. 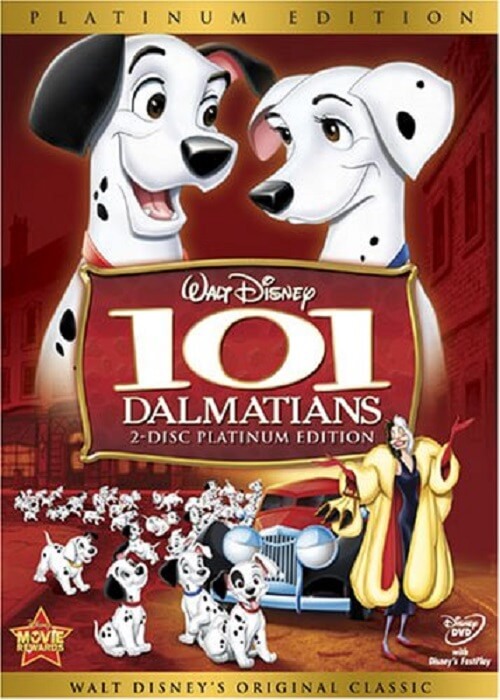 “101 Dalmatians” from 1966 is about a litter of puppies stolen by Cruella de Vil, a fur fashion aficionado who wants to make a Dalmatian fur coat. At a time when fur fashion was very in, “101 Dalmatians” empathizes with animals killed for their fur. Cruella is one of the most iconic Disney villains. She was portrayed by Glen Close in the 1996 live-action film and Emma Stone plays her in an upcoming live-action origin story. 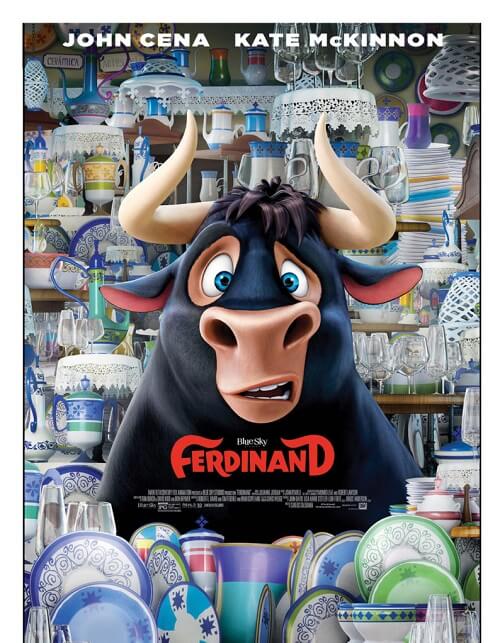 Ferdinand is about a gentle giant.

This 2017 animated film stars a gentle bull named Ferdinand, who loses his father to a bullfight at a young age. Despite his big size, Ferdinand doesn’t want to fight for glory like the other bulls. Despite its lighthearted tone, the film reveals the cruel reality of bullfighting. Ferdinand’s bull friends risk either being sent to the slaughterhouse or being killed by a matador in a fight. Even when he ends up in a bullfight, Ferdinand sticks to his peaceful ways and convinces humans in the crowd to stick up for him. 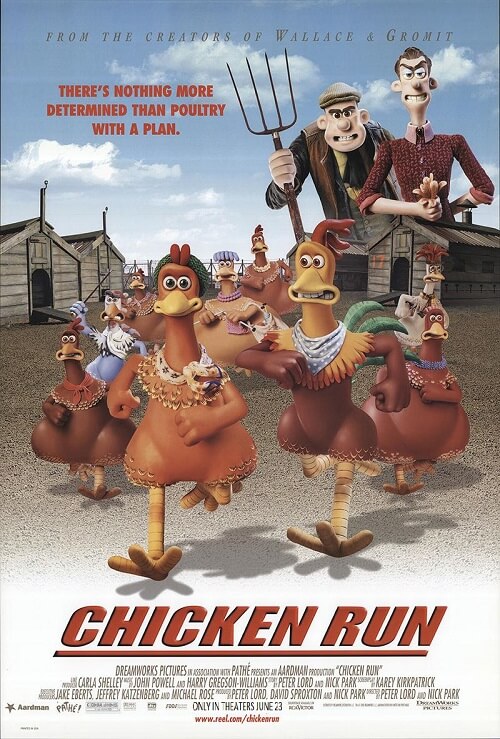 “Chicken Run” is a 2000 stop-motion animation film about egg-laying hens whose caretaker decides to begin slaughtering chickens for profit in order to make more money. After meeting a rooster named Rocky, the chickens devise a plan to escape their fate. 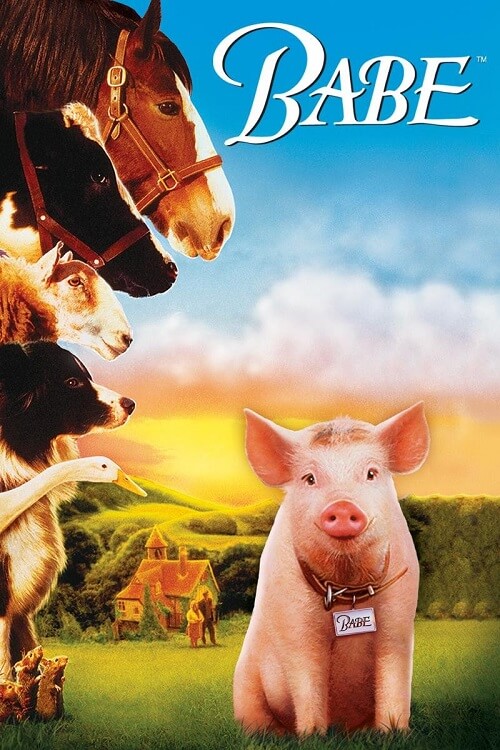 “Babe” is a 1995 drama about an orphan piglet who’s taken in by a farmer. The young pig grows up with a border collie and her puppies. The way humans treat animals is a central theme. Babe comforts the mother dog when her puppies are sold for profit. He meets a duck who crows like a rooster in hopes of making himself useful. And he becomes distressed when he learns from the farm cat that humans kill pigs for food. The film had such an impact on star James Cromwell, who played the farmer, that he went vegan and is now an outspoken advocate for animal rights. 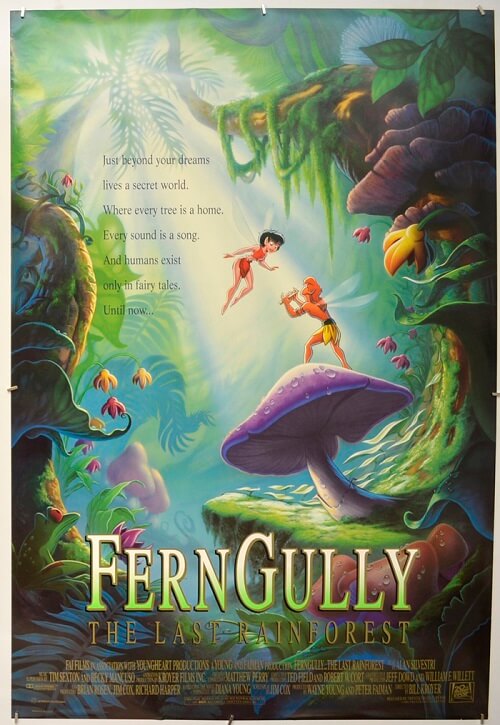 This ’90s classic stands up for rainforests.

“FernGully” is a 1992 animated musical about a fairy named Crysta and a human lumberjack named Zak who through a mishap, shrinks him down to the size of a fairy. The movie takes a strong stance for the environment and animals — Crysta teaches Zak about how harmful cutting down the rainforest is. They meet a bat named Batty, played by Robin Williams, who was experimented on by humans. the main villain, Hexxus, played by Tim Curry, is an anthropomorphized cloud of pollution that gains strength from fossil fuel emissions. 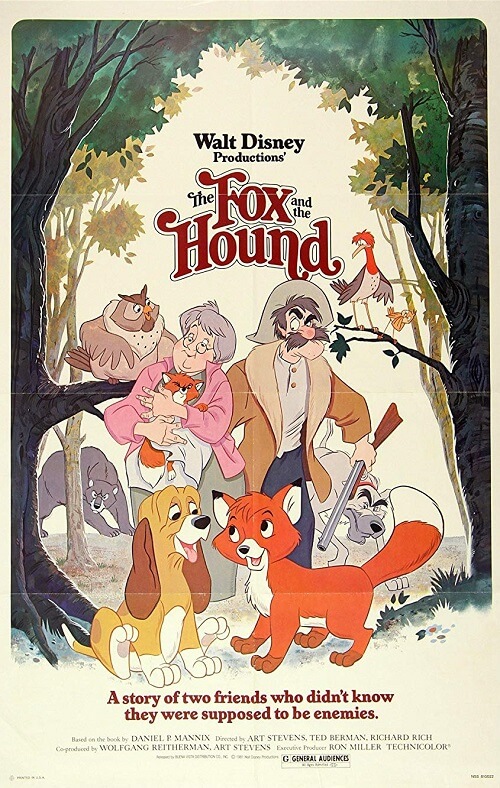 “The Fox and the Hound” is about an unlikely friendship.

9. The Fox and the Hound

Disney’s 1981 classic “The Fox and the Hound” is about the unlikely friendship between an orphan fox named Tod raised by a human and a puppy named Hunter. Wild animals warn Tod not to get too close to Copper. They even show him the pelts of animals that Tod’s master shot. As he gets older, Tod’s human caretaker releases him back into the forest, where he adapts to life in the wild. While on a hunting trip, an older Copper tracks down Tod. But, despite his master’s orders, he spares the life of his former friend. 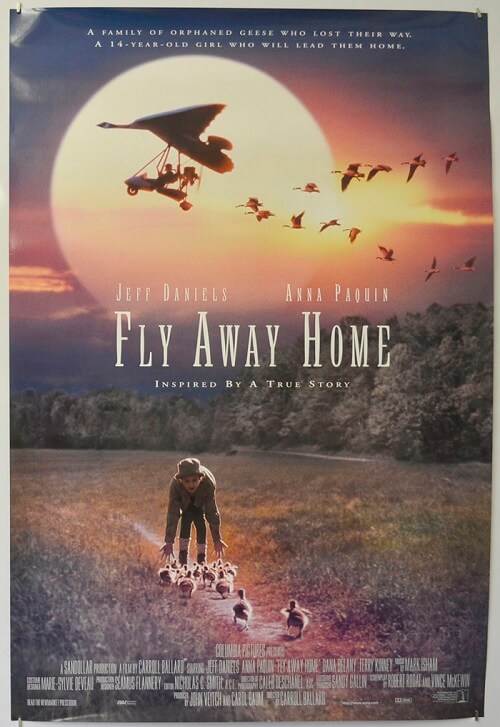 “Fly Away Home” is about being kind to wildlife.

This live-action coming of age drama from 1996 is about Amy, played by a young Anna Paquin, who moves in with her estranged father after losing her mother. When construction destroys a small wildlife habitat, Amy comes across an abandoned nest with 16 goose eggs. When the eggs hatch, the young goslings see Amy as their mother, and she takes up the responsibility of teaching them everything about surviving in the wild — including learning to fly a plane so she can help them learn their migratory pattern. 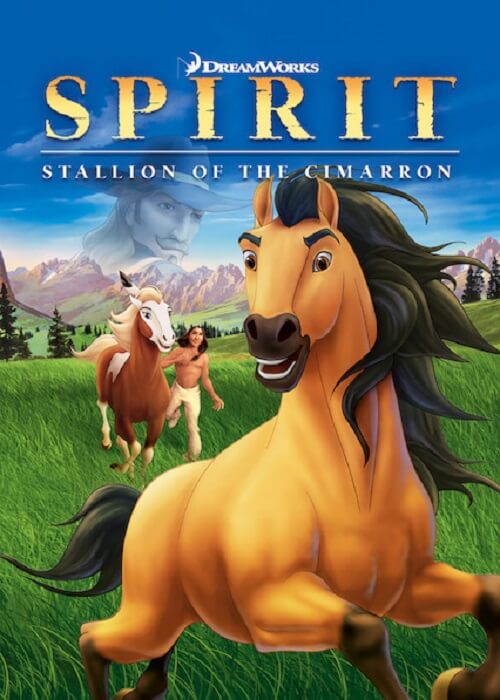 11. Spirit: Stallion of the Cimarron

“Spirit: Stallion of the Cimarron” is a 2002 animated film set in the 19th-century American West. The titular character, Spirit, is born to a herd of wild horses but is eventually captured by wranglers. He’s sent to a US cavalry post, where they try to force him to be obedient to humans. He’s rescued by a Lakota Native American named Little Creek and they form a mutual respect for each other’s desire to live free. 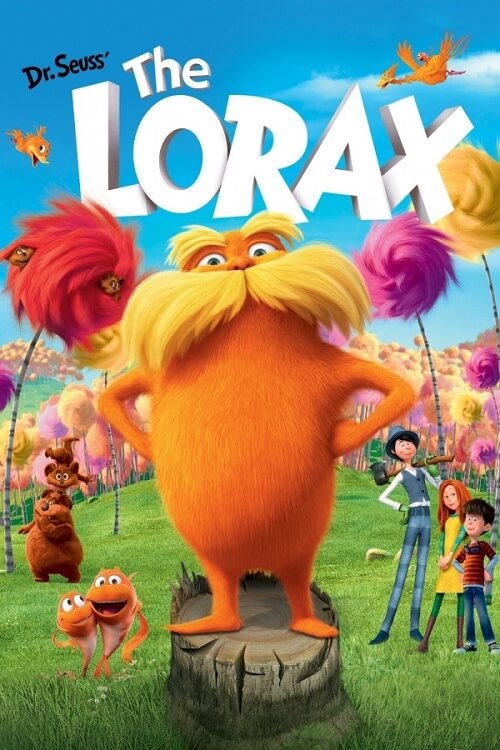 Corporate green is the villain in “The Lorax.”

Based on the Dr. Seuss book, the 2012 animated film “The Lorax” takes place in a world where all plants are artificial — and the mayor sells bottles of oxygen marketed as Fresh Air. The main character, a boy named Ted Wiggins, has a crush on an environmentalist who wants to see a real tree more than anything. This children’s movie teaches the importance of respecting nature above all. 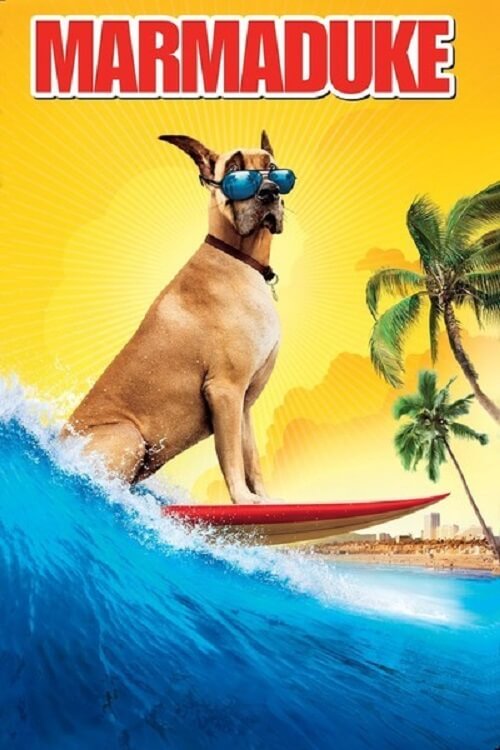 All dogs are good dogs in “Marmaduke.”

An adaptation of the newspaper comic strip, 2010’s “Marmaduke” follows the story of its titular character as he navigates the divide between pedigree dogs and other neighborhood dogs. The movie teaches the lesson that every dog is an individual and worthy of love, no matter what their background. 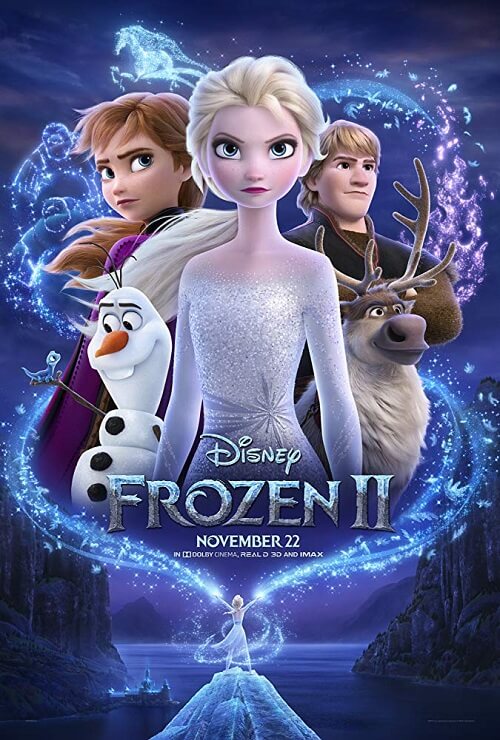 A sequel to Disney’s 2013 hit musical, “Frozen 2” sees its stars Elsa and Anna discover that older generations prioritized themselves over nature, ignoring the warnings of the land of Arendelle’s native tribe. The two sisters set to right the wrongs of the past. The sisters must also learn to navigate a world in which the people they looked up to were the ones who destroyed an ecosystem in the name of greed, paralleling the current climate all too well. 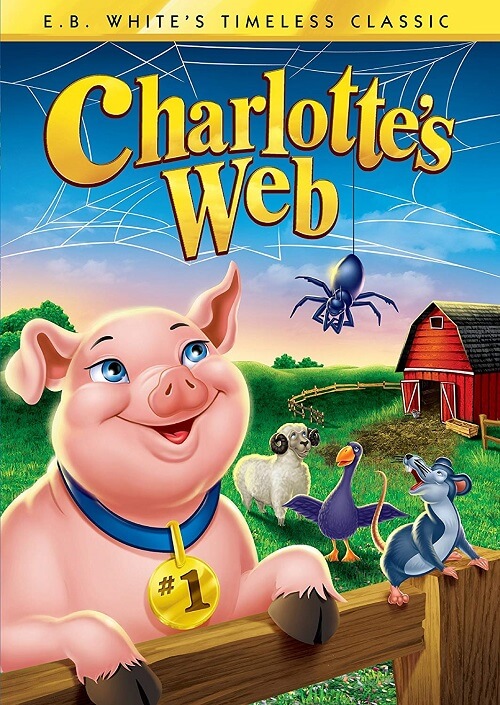 “Charlotte’s Web,” based on the children’s book by E.B.White, is about a pig named Wilbur who befriends a clever spider named Charlotte. When young Wilbur learns that pigs are killed for food, Charlotte comforts him and comes up with a plan to save him from slaughter by spinning webs praising him, which humans see as a miracle. Because of Charlotte’s kind heart, Wilbur is allowed to live out the rest of his days. 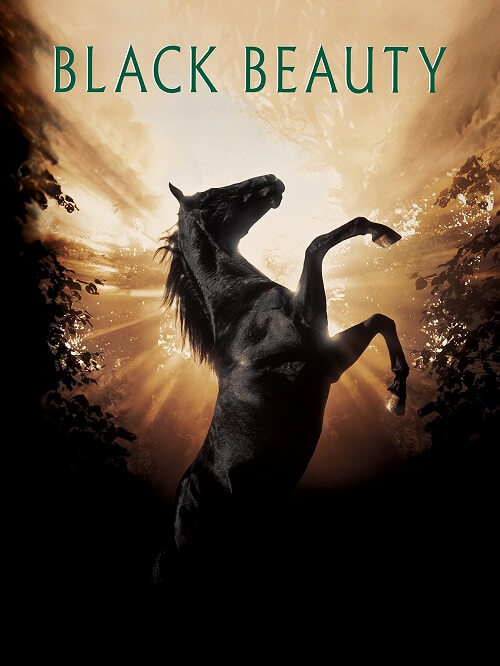 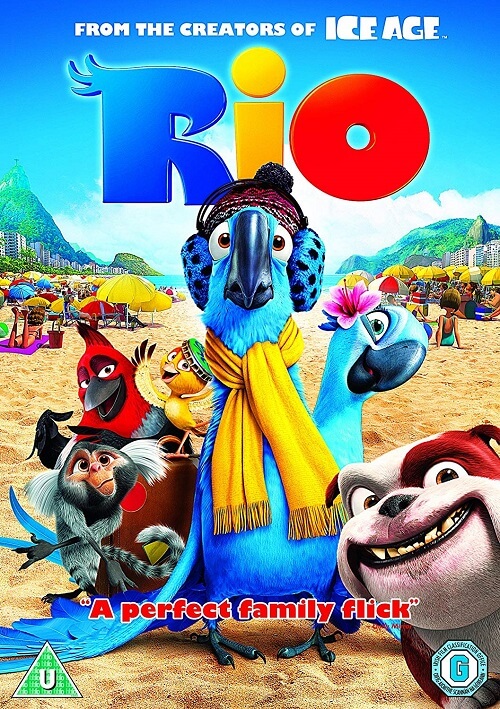 This 2011 animated film starring a Spix’s Macaw named Blu shows how exotic birds found in pet shops are the result of the cruel smuggling trade. Blu is kidnapped from his home at a young age and finds a home in Minnesota when his crate falls off a transport truck. When he’s older, he’s brought back to Rio de Janeiro to mate with a female Spix’s macaw named Jewel, who longs to return to the wild. During the movie, the birds sabotage a pet trafficking ring, which results in smugglers being sent to jail. Blu and Jewel spend the rest of their lives together in the wild. 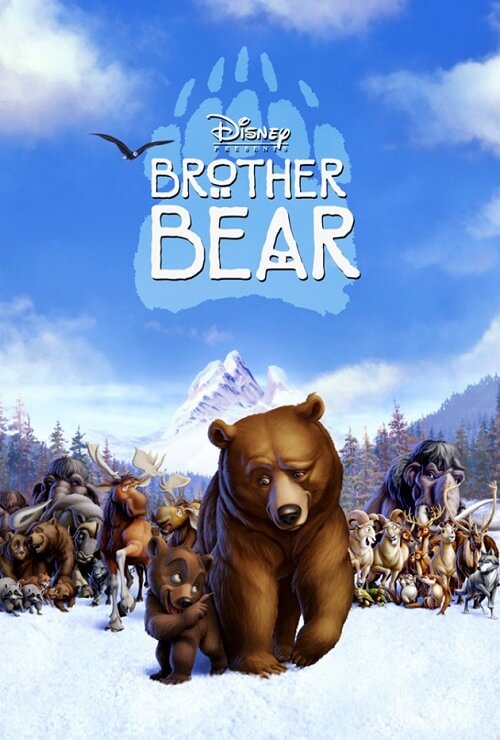 A young man regrets taking revenge on a bear in “Brother Bear.”

In Disney’s 2003 animated feature “Brother Bear,” a young Inuit man named Kenai, voiced by vegan actor Joaquin Phoenix, seeks revenge on a bear who he blames for the accidental death of his brother. But, after he kills the bear, the Spirits deem the death unnecessary and change him into a bear as punishment. As a bear, Kenai learns that he can speak to other animals and meets a young cub named Koda, whose mother is the bear that he killed in revenge. Through his journey, Kenai grows empathetic toward Koda, gaining respect for animals as individuals. 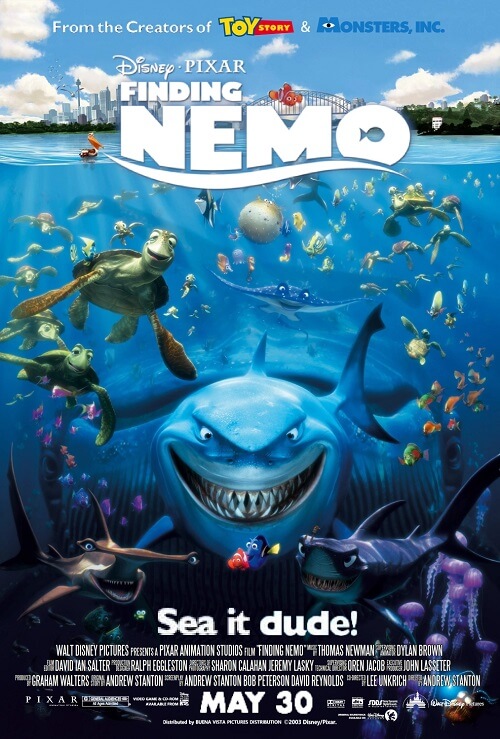 A young fish must escape a dentist office aquarium in “Finding Nemo.”

Pixar’s 2003 CGI film “Finding Nemo” is about Marlin, a single clownfish father whose son Nemo is captured by divers to be held captive in a small aquarium tank. Marlin is joined by Dory, a blue regal tang voiced by Ellen DeGeneres. And together, they go on an epic journey to bring Nemo home. Along the way, they meet a vegetarian shark named Bruce, who resists his instincts because he believes that “Fish are friends, not food.” 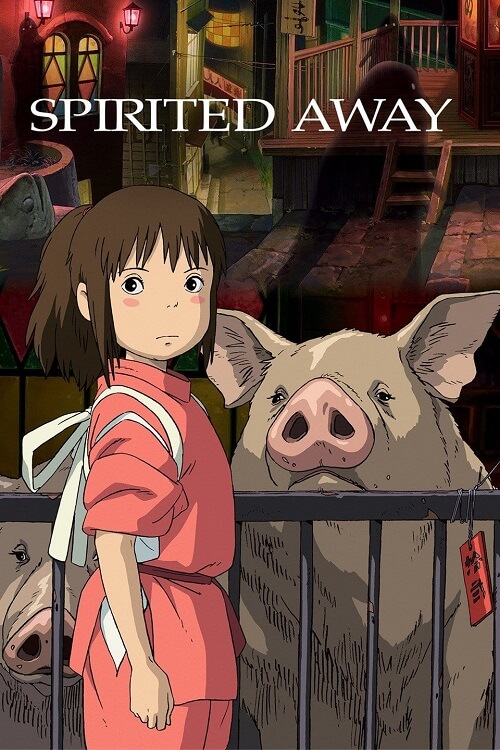 Legendary animator Hayao Miyazaki’s 2001 feature “Spirited Away” is about a young girl named Chihiro. Chihiro becomes trapped in the spirit world after her parents eat food meant for the gods. Many of Miyazaki’s films have an environmental message and Spirited Away is no different. While working at a bathhouse for spirits, Chihiro saves a customer who is the powerful spirit of a polluted river. Her friend, Haku, is a river spirit who lost his memories when city planners filled the river to make room for new apartment buildings. 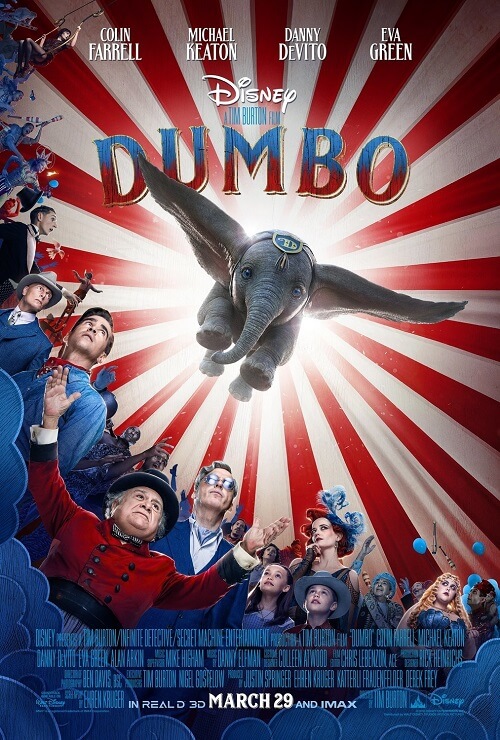 The 2019 remake of “Dumbo” is a far cry from the original 1941 film. The movie follows Dumbo, a young circus elephant who is separated from his mother when she defends him from being bullied for his big ears. When the circus learns that Dumbo can fly, he becomes part of an act. But, the young elephant only wants to be reunited with his mother. At the end of the film, Dumbo and his mother are sent home to India. The circus also enforces a strict no-animal policy and the amusement park owner, Vandevere, is arrested for misconduct.